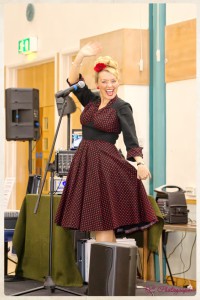 This week has been a little unusual in that I’ve had a run of shows all with the same theme. It seems the 1950s and 60s is now one of my best-selling shows and it couldn’t have worked in better with my filming last Sunday. This week I will be returning to the Limelight theatre to capture a few of my 1950s songs on film and when the show reel is edited together I’m sure it will make a great addition to my 1950s and 60s page on my web-site.

This week I will be filming “Jail House Rock”, “Johnny B Goode”, “Mr Sandman” and “Diamonds are a Girls Best Friend”. I know all these songs really well as I regularly perform them but it has been good to go back over the dots. I’ve been trying to remember all the different parts I sang in “Mr Sandman” and which one of me sung what when! When I was in the recording studio last Wednesday with Richard I had hoped he might have still had the parts I sung when I recorded the number in 2012 for radio. The frightening thing about technology Richard has up dated his equipment twice since then and that was only four years ago. Although we have the finished track stored and the backing track the working tracks often get lost when it comes to up grading soft wear. Although saying that I never thought for the life of me I would ever want to go back over the three individual parts again. This week I’ve been listening very carefully to my recordings as David will be filming me in triplicate as the three Harrison Sisters. 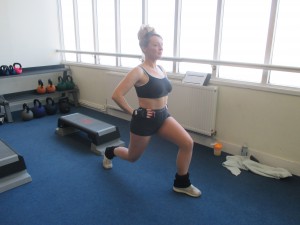 Working Out Those Thighs! 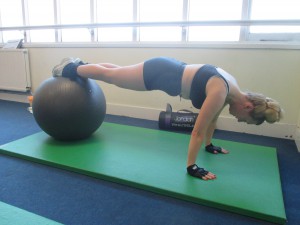 The Plank – Great for Tummy!

I still have a few out-fits to sort out for Sundays film shoot. Judi has been busy finishing off my Capri pants and my Diamonds dress needed to be taken in on the waist and let out in the bust. Strapless dresses are a nightmare as they have to fit perfectly and my shape is constantly evolving. All this training has really paid off though. My waist is smaller as are my thighs thank-goodness. I still need to work on my tummy a little more and every morning I do my 8 minute abbs work-out. My friend Kim told me about it and you can find the work-out on You Tube. I thoughrally recommend it.

This week I’ve been working out with my trainer Elliot and I’m certainly getting stronger and leaner. The other week I was able to lift my larger 300 speakers off the stands on my own without assistance. Lifting them on has never been a problem but that extra strength needed to lift them off always has been until now. There are times I wish I had the strength of a man, but I don’t do too badly considering and I’m strong enough to lift my own rig which is very important. Last Wednesday I was performing at a Club in Elstree which has over 400 members. Usaly for a club of this size I would bring an engineer with me as it requires 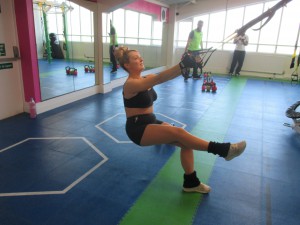 my bigger rig and takes longer to set. Rather foolishly I compromised my standards to accommodate the clubs budget by working on my own with-out an engineer. When ever I perform I always do so to the very best of my ability often doing the job of several people. Sadly I wasn’t quick enough striking down at the end of the show and I ended up having my equipment thrown off the stage by a very unpleasant odd job man. In his haste to pack up the stage he then went and dropped the stage on my speakers. I asked him to be careful and he replied “I don’t care about your speakers”! I was not a happy bunny!

I certainly don’t ever want to put myself in this position again and I’m very pleased I’ve fulfilled my 3 show contract with this club. Sometimes it’s not only right – but good to walk away!

On a brighter note my friend Robert Etsell has taken some photos of me at the club as my show was very well recived by the members. 2016 is also filling up nicely and I’m looking forward to filming this Sunday so I shall leave it here tonight. Keep Watching as I’m off to Putney on the 6th. More on that next week.

Toodle Pip and Bye for now!