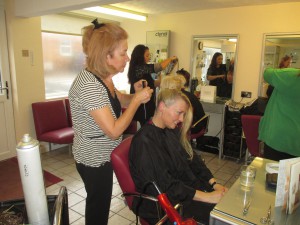 Getting Ready with Angela for the Shoot! 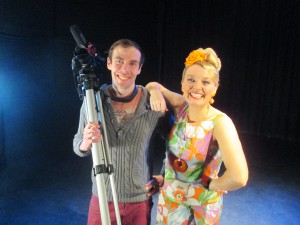 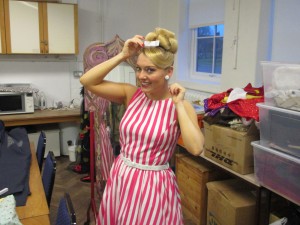 Behind the Scenes at The Limelight Theatre! 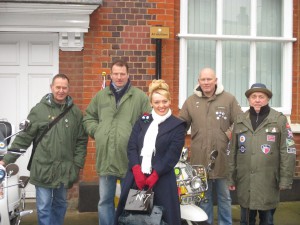 Meeting up with the Mods of Leighton Buzzard!

Hello every-one I’m back at my desk after a very busy weekend of singing the 60s at the Limelight Theatre in Aylesbury. If you caught my last blog you will know I’ve been working hard on some new show reels. I’ve been planning this for ages as I’ve been very concouse of the fact my video library is full of 40s footage with none of me singing the 50s and 60s. Tastes are changing and I’m finding my “Swinging 50s and 60s” show is now one of my best sellers. Oddly enough all my shows this week are 50s and 60s which is just as well as I’m still sporting a 1960s hair doo from Sunday’s shoot!

I was in the hairdressers with Angela on Saturday morning getting ready for the shoot and after looking through at a lot of different styles I went for a style which was based on Barbara Winsor. At first I thought of having a 60s beehive but I’m very pleased we went for curls on top rather than an Amy Winehouse. I think the Babs style suites me better and was wisely chosen as it went splendidly with all my 60s outfits.

This weekend was all about capturing my 1960s songs on film and next weekend I will be returning to the Limelight theatre to sing the 1950s. On Sunday I sung my way through “You Don’t have to Say You Love Me”, “Will You Love Me Tomorrow”, “Bobby’s Girl”, “My Boy Lollipop”, “Let’s Twist Again” and “Sway” each one sporting a different costume.  I engaged Aylesbury bassed film maker David Pustansky to make the showreel and next week I’m singing “Johnny B Goode”, “Jail House Rock”, “Mr Sandman” in triplicate and “Diamonds are a Girls Best Friend”. When edited together I hope the above will make for an entertaining and well-played showreel.

I’ve spent a great deal of time thinking out the costumes and colours and I’m hoping very much I will be able to get a 1950s motor bike for next Sunday’s shoot. I’m not sure if I will be able to or not but I thought it would be fun to sing “Johnny B Goode” while riding a BSA. So fingers crossed!

That’s about all my news for now and I shall leave you with a photo of me with the Mods of Leighton Buzzard as I dash from the hair dressers. Keep watching and I shall keep you posted about my showreels. I hope to making quite a few films this year.