Meet Fiona Harrison – she’s a fizzy fun spirited soprano who brilliantly captures the imagination and all that’s wonderful about vintage. Disciplined and focused, she has single handily created a market for herself within the world of nostalgia. When she arrives all eyes are upon her – making her one of the most exciting and photographed entertainers on the heritage and re-enactment scene. Fearless and unconventional Fiona loves a challenge and is never more engaging than when she is  performing or out and about turning heads in a fabulous new outfit!

In 2016 Fiona launched her first on line magazine entitled “Vintage Fair”. Click onto the link below and share in Fiona’s love of all things vintage as we glimpse into her life style and take a look at the girl behind the voice.

Listen to Fiona’s interview with Rosie MacLeod on “Radio Verulam” as she speaks about her career and the tricks she uses to stay on trend within the world of Vintage. 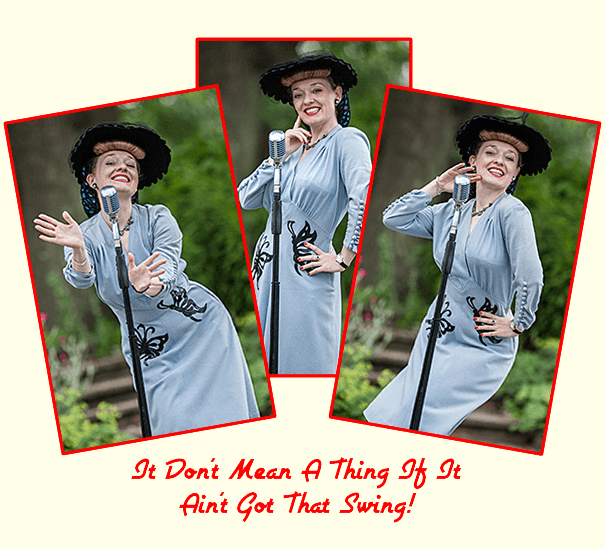 Keep Up to Date with Fiona’s Blog Diary and Latest News on Facebook!

Click on the video link below to see how Fiona’s region has been marking the 75th Anniversary of VE Day in lockdown – seen here on Anglian ITV News.

Fiona Harrison  – A Voice in a Million 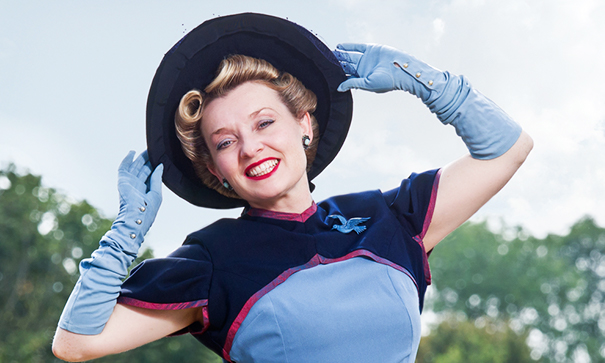 Fiona Harrison is an extraordinary entertainer who combines beauty and elegance with quality and style. Dubbed by one theatre critic “A Voice in a Million” after her stunning performance in the touring stage musical “From Cobbles to Rock”, Fiona has lead the way in vintage entertainment performing extensively in theatres and cabaret venues from as far a field as Japan to the Outer Hebrides and Europe. Highly respected on the re-enactment and heritage scene for her gorgeous costumes and thrilling showmanship; Fiona specialises in music from the 1880s to the 1970s performing a variety of musical styles from Opera, Big Band and Swing to Rock and Roll.

Fiona’s trademarks are her superb medley arrangements and close harmony work which she has achieved through embracing modern technology to produce her own distinctive sound. By recording the two harmony parts onto her backing track and then singing the melody line live in performance Fiona’s act is unique and unlike any other. With over a thousand songs in her repertoire and with a wealth of shows to choose from Fiona’s performances are always fresh and exciting displaying great musical and vocal variation not to mention her stunning period costumes and beautiful out fits.

Credits have included stand up comedy in the Joyce Grenfell vein, summer seasons, pantomime, working with “The Milton Keynes City Orchestra Big Band” and the “George Thorby Glen Miller Orchestra”. Starring in “You are my Hearts Delight” at Bexhill’s famous De la Warr Pavilion with “Opera South East”,plus national theatre tours in the 1940s stage musicals “We’ll Meet Again” and “How Hovis Won the War” to name but a few.

Today Fiona spends much of her time travelling, performing on average between 250 and 280 shows a year. She has an every growing following through her Facebook, Twitter, Instagram and Social media pages and updates her blog diary every week. Fiona also writes for the Uk’s monthly nostalgic magazine the “Best of British” on a variety of fashion and music related topics connected with the 1940s and vintage scene.

During her career Fiona has been a guest on many radio shows.

To find out more about Fiona’s career and background click onto her Biography, Credits, Articles and Blog pages. For fashion check out Fiona’s Fashion and various decade pages where you can read up about her many shows and view her Videos and Show Reels online.

Fiona Harrison - A Voice in a Million

Fiona Harrison - A Voice in a Million - Soprano and Costume Artist available to sing for your event anywhere in the world. Victorian/Edwardian WW1 Music Hall. Songs from the 1920s, 30s, 40s, 50s, 60s & 70s. All performed in authentic uniforms & glamorous costumes of the period.

Fiona Harrison - A Voice in a Million
Video of the Week!
Be the first to enjoy my latest flicker book video which documents my Bletchley Park Wrens show which I performed in the Summer. Photographs shot on location by H - 100 Photography and thank-you for Watching! 😉

Originally written in 1933 and later featured in the 2005 film "Mrs Henderson Presents". Fiona adapts this jaunty little number and performs it as part of he...
3 1    View on Facebook

Fiona Harrison - A Voice in a Million
Thank-you to every-one who came to see me perform at The Officer's Mess Cocktail Bar in Stratford Upon Avon last night. It was a wonderful night as I performed three sets covering Opera, Hollywood Musicals to Rock and Roll. Here are a few of my behind the scene shots as I sound check before changing into costume. Thank-you for Following! 😉 🎼

Fiona Harrison - A Voice in a Million
Out-fit of the Week!
Catch me this week as I get into the swing of the Christmas party season with lots of wonderful festive shows in the diary. See me this week in my late 1940s early 50s ball gown shot on location at Danny House by Angela Adams. Keep Following! 😉 🎼

Fiona Harrison - A Voice in a Million
Read my latest article in the Best of British magazine as I write about one of my favorite musicals "Me and My Girl". The show opened in December 1937 and this year the musical is celebrating it's 85th Birthday. Copies of the BOB magazine can be picked up at WH Smiths and Thank-you for Following! 😉 🎼

Fiona Harrison - A Voice in a Million
A date for the diary and something to look forward to Friday 2nd December 22 at 9pm as I perform some of my favorite Vintage Songs and Arias with a Festive Twist at The Officers Mess 1940s Cocktail Bar, 24 Sheep Street, Stratford-Upon-Avon, CV37 6EF, Tel 01789 293908 https://officers-mess.co.uk/ . It will be delightful to see you and Thank-you for Following! 😉 🎼

Fiona Harrison - A Voice in a Million
Out-fit of the Week!
Today I'm performing the music of the 1920s and 30s before motoring off down to the south coast. Catch me this week out and about in my early 1930s navy blue coat and red cloche hat with matching gloves. Keep Following! 😉 🎼