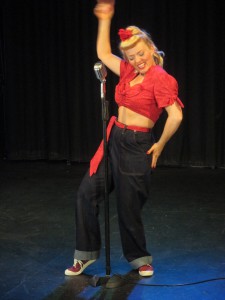 May I start my blog tonight by saying how sorry I was to hear about the loss of dear Terry Wogan. I grew up watching his Wogan program on the TV along with Blanky Blank. A truly great presenter who could hold any show together no matter how rubbish with his subtle wit and humour. The times we would ask ourselves as a family – why are we watching this dreadful program Banky Blank. Well it was because of Terry Wogan of course as he would make fun of the dodgy prizes. Who could forget the weekend for two in Iceland as we all went wooo at the screen. Terry you will be greatly missed and the BBC wont be the same with-out you! ;-(

From Terry to Fiona’s world and it’s been all go this end. I had set Sunday aside to finish off my 1950s 60s show reel and this time I had the pleasure of working with my dear friend Kim. Kim sometimes works with me as my sound engineer and she is an exelant hair dresser too. 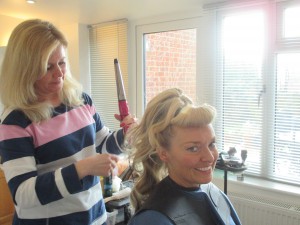 If you’ve been following me you will know I was filming the 60s last weekend at the Limelight theatre and this Sunday we were doing the 1950s. I wanted a hair style which would work well with my rock and roll numbers so we went with a pony tail. I was with Kim bright and early in the salon on Sunday morning as she styled my hair into a pony tail. Between doing my sound at the theatre Kim was also able to re style my hair into an up do on set for “Diamonds are a Girls Best Friend”. The wonderful thing about working with creative people is to always leave space for ideas to evolve and never be too hard and fast in your vision. 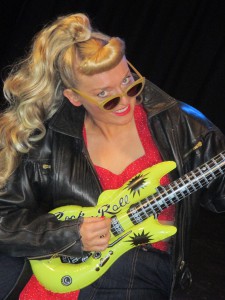 Often an idea or a look can be created through circumstance. Kim very skillfully was able to sweep up my pony tail and pin it on top into a Breakfast at Tiffany’s style which was just sheer ginuess and couldn’t have worked better. When performing these songs it’s good to be inspired by the original artists but it’s important to show some creativity rather than just copy what’s been done before. That’s why I chose to wear a purple gown and matching gloves rather than copy Marilyn’s pink evening dress.

As yet I haven’t seen the rushes and I wont see those until next Monday when I sit down with film maker David Pustansky and we start working on the edits. I’m sure many of you have seen some of the still photos on facebook and all the different looks. I have to confess I really enjoyed doing the rock and roll. Just for once it was great to play the air guitar and do all the things rock and rollers do. (I did go a bit mad as I went Back to the Future 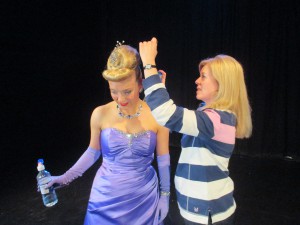 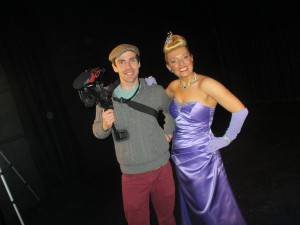 Between Takes, On Set with David!

Michel J Fox style!) Seeing will be believing and I’m not sure if David could quite belive what he was filming. It makes such a change from singing Opera  so something to look forward to – Fiona as you’ve never seen her before! I had hoped to get a 1950s BSA motor bike for Jonny B Goode but sadly as Sunday turned wet it wasn’t possible. Vintage bikes are not good in the rain but I do hope the 50s show reel will look good despite me not having a motor bike.

That’s about all my news for now other than my diary is filling up for 2016. I’ve already sold 140 shows so far and it’s only the 1st February. Do look out for my next blog as I will be keeping you posted with some of my forth coming 2016 events.