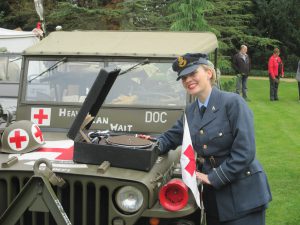 Out and About at Hughenden Manor! 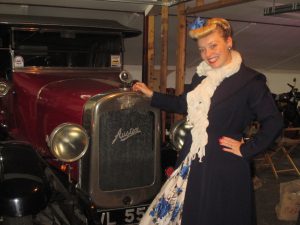 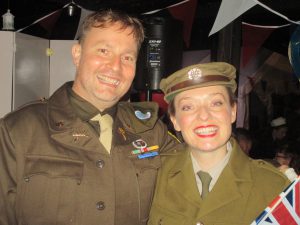 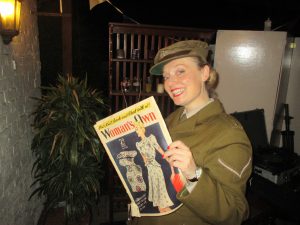 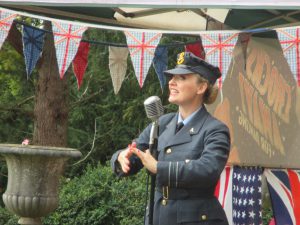 On Stage at Hughenden Manor! 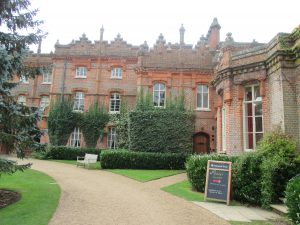 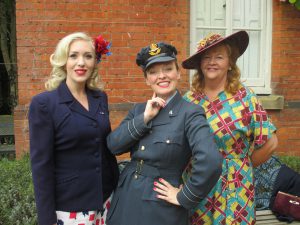 Me with the Lovely Marina May & Mother! 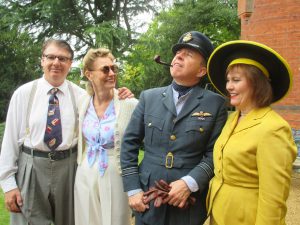 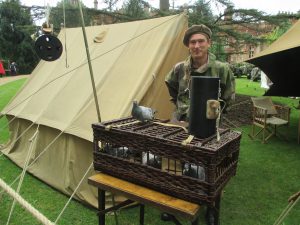 The Man with his Pigion!

Hello every-one it’s good to catch up with you all as I’ve just got back from a fantastic weekend of all sorts. This week I’ve been out and about performing at private parties in between singing at Hughenden Manor for The National Trust’s 1940s Weekend while dashing in and out of the recording studio in preparation for when I go before the cameras the end of this month. In truth I didn’t get back from the recording studio until 2 am this morning. I wanted to re record some of my songs before filming and rather thrilling I was able to find a new sound for myself which I shall tell you more about in a moment. So you could say it’s been a busy few days – but first things first let me tell you about Friday.

On Friday evening I was performing in the charming Oxfordshire village of Cottisford for a private party which attracted the whole village in support to raise funds for the local church. I had been engaged to perform 3 x 45 minute sets over the course of the evening music from the 1930s through to the 1960s which is right up my street and just my cup of tea. I had played in the village once before so it was lovely to meet up with so many friendly faces I recognised from my last time. I even included some Opera which went down especially well with the guests.

On Saturday night I had been booked to perform for a 1940s birthday party at The Old Red Lion pub in Kings Langley near Hemel Hempstead which was great fun. All the guests came dressed up and entered into the spirit as I performed 2 bright 45 minute sets. The host Gavin had asked me to wear my ATS uniform which was the right choice of costume as I sang outside and I finished my set with lots of flag waving and British Themes. One of the guests Peter very kindly brought along and gave me a copy of Womens Own magazine from 1940 which I thought was very kind. It’s fascinating to look back at these old magazines and read the adverts. I partially like to look at the 40s fashions and the fashion atrial Mrs Howler meet Mrs Chic made me smile. It tells you how to put together an out-fit by not over accserisezing.

Come Sunday I was booked all day to sing at Hughenden Manor. I have to confess the job came in as a last-minute booking through my friend Lynda Styan who wasn’t able to do both days. If you are in the know you will know Hughenden Manor was the home of Disraeli and during WW2 was used as a secret RAF intelligence and map making unit, which amongst other things planned the Dam Busters raid in 1943, the bombing of the Tirpitz in 1944 and of Berchtesgarden in 1945. So as you might imagine with this information to hand I thought it appropriate to wear my WAAF uniform particuly as I open my WAAF show with an RAF medley which concludes with the Dam Busters theme tune.

The 1940s weekend had been organised by event company Event Plan for The National Trust and it was my first visit to Hughenden Manor. It was clear to see from the off that every-one at the event had been hand-picked as the standard of displays and the quality of the re-actors were very high indeed. I was only required to sing for 3 x 15 minute sets due to the fact Lynda and I were filling in for another act who couldn’t appear at short notice. So the job couldn’t have been easier. This allowed me plenty of time to look around the house and grounds which was a real treat. So often when I am performing at these events I have very tight turn arounds so this job seemed like a delightful holiday.  I even had time to sit down and have a proper  lunch at Dizzys cafe with some lovely re-anacters!

On this occasion I had the pleasure of working with entertainers “The Spitfires” and “Marina May” on The Terrace which was a great location as it looked over the North Lawn. While I was in the house I caught a little of Marina’s show which brought back a memory of when I was a Red Coat in Blackpool. At one point Marina brought out her head scaf and sang “Wish Me Luck as you wave me goodbye” in a tribute to Our Gracie – Gracie Fields. Something I use to do at The Metropole Hotel back in the day. When I first went to Blackpool my repertoire was very classical so the musical director Glynn Buckley took me under his wing and introduced me to the Lancashire Soprano Gracie Fields. The first song I learnt in Blackpool was “Sally” and I still have the sheet music Glynn gave me in my pad today. Glynn took me to Rochdale and to the Gracie Fields Museum which was in the town centre. I don’t know if the museum is still there but I belive they are erecting a statue to her which I hope one day I will see when ever I might be passing through Rochdale. Catching that moment in Marrina’s act reminded me of that time and it was lovely to see her carry on some of the old traditions as she finished her show with a patriotic selection and “There’ll Always Be an England”. 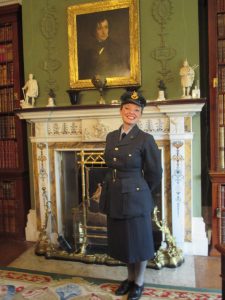 although on this occasion I thought I would go with the flow. Just before I was due to start my final set Ancient Wisdom started his talk on the Story of Dunkirk. As he was standing in the middle of the lawn I didn’t want to drown him out so instead of finishing with the usual I compleated my set with “The Flower duet from Lakme” which was a real hit with the National Trust audence. Next week you will be able to see me on Saturday working for another National Trust property Wimpole Hall, Arrington , Royston, Cambridgeshire, so I hope you can all make it along as this will be another Event Plan event. If Hughenden is anything to go by I’m sure it will be fantastic so I look forward to seeing you.

In the meantime you will also be able to catch me on Sunday performing in Leighton Buzzard at The Sand and Motorcycles rally in Pages park 3 x 45 minute sets daily music from WW1 – 1960s. Speaking of the 1960s you might be interested to know I have two new videos up on You Tube. “You Don’t Have to Say You Love me and “Johnny Be Goode”. In time they will be included into my web-site as part of my 1950s and 60s page but if you 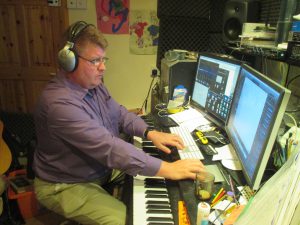 Back in the Studio with Richard!

would like to see them before then just click onto the Follow Fiona Tab on the right hand side of the screen, it will zip out, press the You Tube icon and they are the first 2 videos you come to.

Time is creeping on and before I go to bed I want to tell you I had a bit of a break through in the recording studio yesterday. At last I’ve found my new crooning sound which I’m looking forward to sharing with you all when I record my new showreel. So keep watching this space and I shall keep you posted.