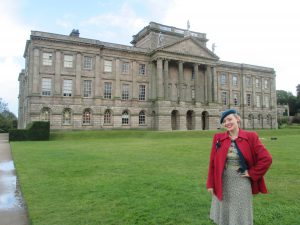 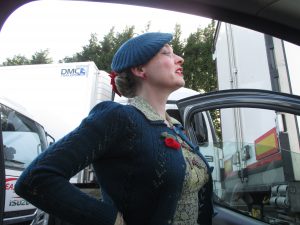 How Much Further on the M6?

Hello every-one it’s been quite a few days what with one thing and another where nothing has quite gone to plan! Where Paul and I were all set to sing on the Isle of Man this weekend, for the Island at War’s 1940s Event. Fate stepped in and we ended up at Lyme House following in the footsteps of Mr Darcy. Why?

Well if you live in the North West of England you may have seen on the news that on Thursday afternoon a lorry shed it’s load of offal all over the M6 resulting in the closer of the motorway having damaged the road surface. While this disaster was taking place on the M6 the M56 was also closed due to the fact one of the bridges had become unsafe because of a damage support. This created a massive tail back which went on for miles blogging not only the M6 and M56 but all the surrounding roads in Cheshire. At one point Paul and I even saw the TV cameras flying over head in a helicopter as we were stuck in the long traffic cue between junctions 18 and 19.

It usually only takes 3 hours to Liverpool from my house and both Paul and I left at 1pm. Our ferry wasn’t due to leave Liverpool until 7.15pm so we thought we had plenty of time even with delays. However nothing prepared us for this 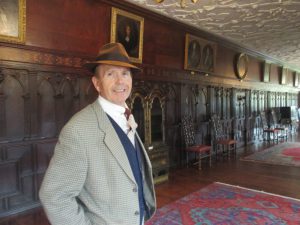 Paul in the Long Galley!

and in the end we were stuck in the jam until 8.30pm when we managed to get off at Knutsford services and were lucky enough to get one of the last remaining rooms at The Travel Lodge. Phew!

Tomorrow is another day we thought!

I had wondered if it would have been worth struggling on up another 70 miles to Heysham as there was another ferry leaving at 2.15 am in the morning. It would have been a gamble as it was fully booked and it would have meant hanging around all night hoping someone wouldn’t make the ferry on the off chance they might let us on. 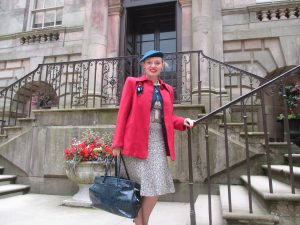 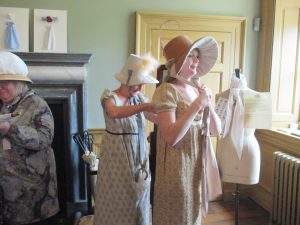 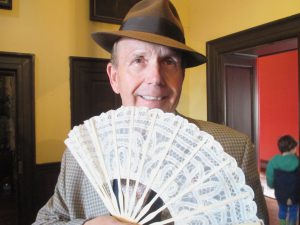 Paul Joining In With The ladies! 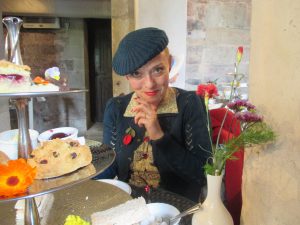 Stopping for Tea at Pemberley!

Isle of Man had been cancelled due to the fact the Captain of the 2.15pm had crashed it into the wrong dock in Douglas damaging not only the ferry but many of the motorbikes it was carrying. To make matters worst this weekend is Grand Prix week where motor bikes of all ages travel to the Isle of Man so every available crossing is over booked.

The only other way to the Isle of Man is to fly and there are only two aircraft which cover this trip which once again were fully booked. One of the aircraft had been grounded due to technical issues which just made the crossing to the Isle of Man impossible. So with a very heavy heart Paul and I had to except the inevitable and face the fact we weren’t going to make it. In my 25 year carer there has only ever been one other time when I’ve not made an engagement and that was when I was involved in a car crash.

However we weren’t the only entertainers who had been affected by this chain of events. “The D-Day Darlings” were coming both by plane and ferry as 2 of the girls were booked onto the air craft where the other girl was coming with their keyboard player in the car along with all their costumes. I hope at least 2 of them made it to the island otherwise the event would have lost all their musical entertainers which would have been devastating for Anji who put so much hard work into making this event happen.

I know Paul and I were so disappointed we couldn’t get across and our hearts go out to Anji. However it’s all about making the best of it and come Friday once it became clear there were no longer any options left open to us so we decided to visit Lyme. Some of you may have recognized the house in my pictures as it was used in the BBC’s adaptation of “Pride and Prejudiced”. Lyme was cast in the role of Pemberley  Mr Darcy’s great house and estate which sits in acres of parkland so it was perfectly cast as Mr Darcy’s residence. However when you go inside the house many of the rooms have dark oak wood paneling so they used a different house for the Pemberley interiors for the adaptation. What’s rather lovely about the house is they invite visitors if they have the skill to play the pianos and dress up in 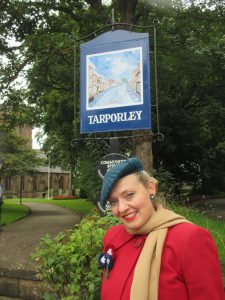 Out and About in Tarporley!

Regency costume. I spend all my time in costume so I passed on this opportunity although it was lovely to see visitors wandering the house sporting the Regency style. Afterwards Paul and I enjoyed a high tea and took a walk in the grounds between missing the showers.

That night we headed off to the town of Frodsham as Paul had been lucky and had been able to secure us a room at “The Old Hall” a delightful 17th century hotel. I think we must have had the best room in the Hotel as it was on the first floor right in the middle and looked straight out over the high street. A hotel well worth visiting again. The staff are all very polite and the food was excellent.

On our way home today we called into the beautiful town of Tarporley . A favorite with WAGS for it’s smart shops and up market goods there’s plenty of designer labels to buy in town. 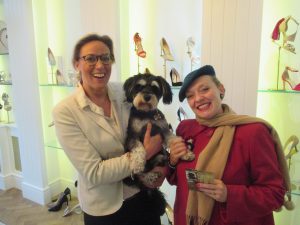 Tiffany, Oscar & Me at Hoity Toity!

One of the shops Paul and I visited today included Hoity Toity which is run by a lovely lady called Tiffany as we were greeted by her little dog Oscar who just loved to be fussed. What a star!

It’s getting late so that’s all my news for now. Keep Watching and Toodle Pip! 😉