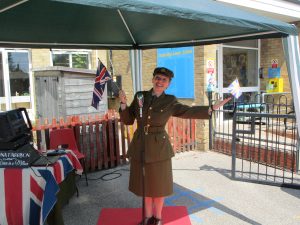 On Stage at Stanbridge Lower School!

It’s been an extremely busy week as I work to beat the clock to get all my jobs done between shows while fighting this current heat wave. Just as the song says It’s too Darn Hot! especially when I’m trying to get all my paper work up to snuff and ship shape!

On Monday I had the pleasure of performing for Stanbridge Lower Schools end of term vintage tea party. It was a lovely afternoon. I had been engaged to play songs from the 1940s while the children had their lunch and then perform my “We’ll Meet Again” ATS show. It was an extremely hot day especially as I was fully kitted out in  army 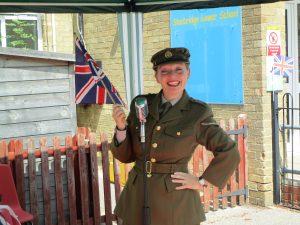 uniform but fortunately the school provided me with a gazebo which made all the difference under the mid-day sun.  Afterwards there was an award ceremony as the school said goodbye to it’s final year pupils who are now moving up to middle school.

I particularly enjoyed the ceremony as the children wore mortar boards they had made from black paper and each pupil was presented with a dictionary and certificate. Interestingly the certificate mentioned what the teaches considered to be the most likely profession for each child. This included an astronaut, fashion 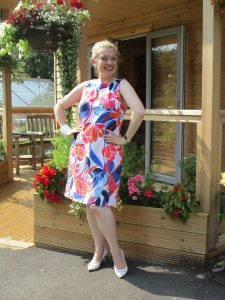 Dressed for a song for Summer!

designer, florist, comic and entrepreneur. It will be interesting to see if in another ten years if these predictions come true.  Especially young Mr David Kelly who made every-one laugh as he moon walked his way up the red carpet. A name to possibly look out for on the future comedy circuit!

On Tuesday I was back in the recording studio with Richard picking up my new tracks. If you follow my blog you will know I put “Be like the Kettle and Sing” and “By Myself” into production sometime ago. Once again Richard has surpassed himself especially with “By Myself which is a Garland power balled. It has a couple of tricky key changes in it and I’m going to be singing it for the first time at Bletchley Park on the 31st July.

It’s taken me twenty four years to get Bletchley Park. I first applied in 1997  but it was never the right time. It should have only been 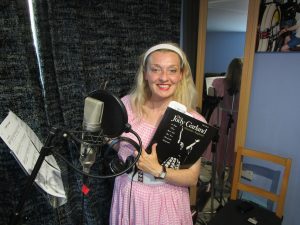 Working in the Hot Recording Studio!

twenty three years but due to the pandemic everything was put back a year. I’m looking forward to performing there very much and I’m working hard on perfecting my new songs.

Tomorrow I’m in Chorleywood and then I’m taking a few days off to entertain a friend of mine Fay who’s coming down from Blackpool. I shall leave my blog here tonight along with details about my Bletchley Park Show. If you are free it will be lovely to see you on the 31st. 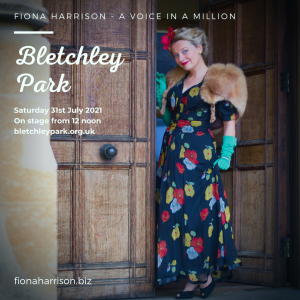