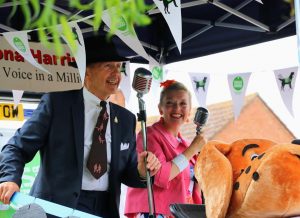 Paul and I Singing the 60s!

It’s been an intense couple of weeks with me performing everyday and cramming in song learning between performances. The year is rapidly disappearing and I’m trying to make the most of the summer. Although restrictions are starting to lift clients are still favoring out-door performances and up to now I’ve been lucky with the weather. I’m keeping my fingers crossed it lasts as I have much to fit in over the next few months! 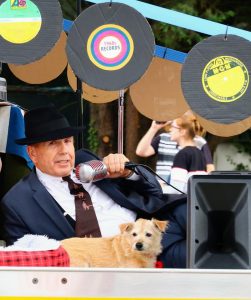 Paul and Poppy on the Float!

engaged by Annie Rourke to sing on the “Dogs for Good” float. “Dogs for Good” is a wonderful charity training dogs to help adults and children with physical and learning disabilities. Annie was very supportive of me last year hosting two of my Driveway concerts in May and December so when she asked if Paul and I would be available to sing for the charity we were delighted to except.

Ever since I was very small I’d always wanted to be part of the Leighton Buzzard carnival and be on a float. Sadly I never belonged to the right dancing school or organisation to take part when I was a child; So Saturday was something of a first, and a childhood dream.

Paul came up, Friday night with Poppy and she is now becoming part of our act. Poppy is a delightful dog and she 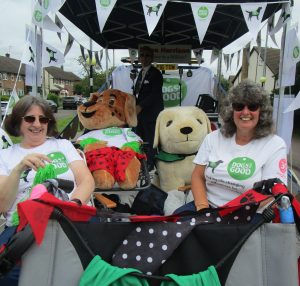 Meet The Dogs for Good Team!

often sits beside us when we are performing on stage. The Leighton Buzzard carnival was no exception as she sat beside us on the float in her basket. It seemed very appropriate Poppy should be part of the “Dogs for Good” float while the other dogs walked along side.

Normally the carnival starts from the Recreation ground in Parsons close where there are stalls and events going on all day. This year the carnival was celebrated as a procesion where due to the restrictions the carnival would come to the people rather than the people go to the carnival.  The route was twice as long as normal and started at 11.30am from Metmore Road and finished at 4pm in Chartmoor Road. 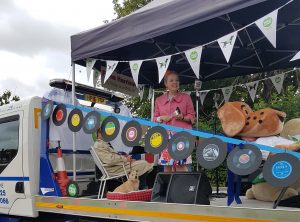 Poppy & I getting Ready for the Off!

Our day began at 9am when we met up with Annie and Stuart in Pierce’s Yard and loaded the float with our sound system ready for the off. Annie and her team had worked so hard to dress the float with records and bunting. The theme for this year was the 1960s in particular 1962 as that was the year when the carnival first began and some of the other floats looked fantastic. I was particularly impressed with the Leighton Buzzard Art Society who had decorated their float with famous paintings from the 1960s and the Blues Brothers who lead the procesion in a 1960s American police car. 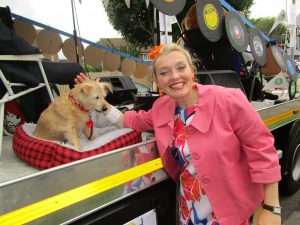 Poppy Waiting for us to Get Going!

Initially we were only supposed to sing from 11.30am to 3.00pm but as the judging took place from 10.30am we began straight away and sung right through to 4.30pm when the float returned to Pierce’s yard. The time went very quickly and despite having two stops along the way I judged the musical numbers about right as Paul and I sang our way through 89 songs with-out having to repeat. I always say the devil is in the detail and I always make sure I carry a spare lap top with me in case one crashes. Sure enough all that programming paid off as my lap top did crash but as I had a spare lap top programmed and ready to go it wasn’t a problem. 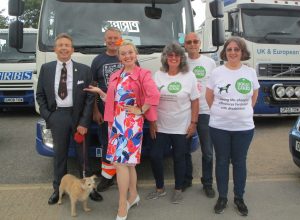 All Together in Pierce’s Transport Yard!

I sometimes think lap tops can over charge when you have them plugged in for hours on end and they run themselves down. The following day it was fine once I’d  recharged it and I went off to my show in Kettering.

Although singing 60s music isn’t difficult Saturday’s carnival was a big sing. It was a wonderful opportunity to try out some of my new songs and everybody loved Paul’s Sinatra which complemented well with all the other songs I sung from Cilla Black, Cliff Richard to The Supremes and the Beatles. I’d like to say a special thank-you to our driver Nick Hayes and his wife Dianne who 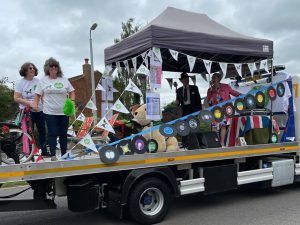 Our Float All Dressed Up & Ready to Go!

drove us so smoothly around Leighton Buzzard. Despite a few road humps and a little uneven terrain in places all was well as we held onto the equipment, braced ourselves and kept singing.

If you would like to find out more about the charity “Dogs for Good” and all the good work they do please click the link below https://www.dogsforgood.org/

On Sunday I was booked to sing a mix of songs from the 1950s, 60s & 70s. As it was World Cup day I decided to where red and white and I finished my show with Nessun Dorma which always goes down well. Such a tragedy we didn’t quite make it after the England side had played so well, but I guess that’s sport. The winner takes it all and who knows maybe next time! 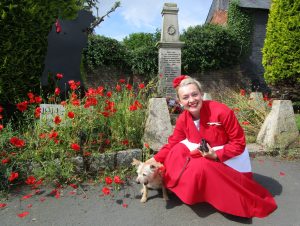 That’s all my news for now as I have another busy week ahead of me and I need to prepare my shows as I continue to sing ” A Song for Summer”. Next Monday I shall be performing for a Vintage Tea at Stanbridge Lower School in my 1940s ATS uniform and don’t forget I shall also be performing at Bletchley Park on the 31st July. If you are able to make it along it would be delightful to see you.