I’m sorry it’s been a while since I last posted a blog but as you can see by the title I’ve been out and about a fair bit this last week. In fact I was performing at Bletchely Park on Saturday which is why I have decided to write a separate blog about my show there which I hope to post up later this week. In the meantime I have a lot of catching up to do, as I tell you about my adventures.

It’s true I don’t get a lot of free time to myself these days as I’m always working. However my friend Fay decided to came down from Lancashire on holiday and I promised to show her a few of the local sights around and about. Getting a clear run of free days isn’t easy but I set the last week of  July clear so I could take her to local places of interest.

I first met Fay many years ago back in the early 90s when I was a Red Coat at the Metropole Hotel in Blackpool. Fay use to run the hair dressing salon at the hotel and I use to have a manicure with her every week. Fay was very kind to me when I first started out in showiness often putting me up when I was working in Blackpool. So when she said she wanted to visit I set about arranging some lovely days out for us to enjoy.

Fay was keen to see a stately home while she was here but sadly Woburn Abbey is currently closed to the public for refurbishment  so I thought Waddesdon Manor would be a good authoritative. Its a wonderful Rothschild residence built between 1874 – 1889 and is a Grade I listed house. It was built for Baron Ferdinand de Rothschild (1839–1898) as a weekend residence for entertaining and to house his collection of arts and antiquities. The house is in the Neo-Renaissance  French Chateaux style and has extensive grounds. The manor and estate was bequeathed to the National Trust in 1957 after passing through three generations of the Rothschild family and is now open to the public for every-one to enjoy.

I had been looking forward to this day very much as it must have been 15 years since I last visited Waddesdon Manor. The house never disappoints as Fay and I had timed tickets and we spent a good three and a half hours looking around the house and visiting The Moreau exhibition. Every room is a delight and it’s good, places of interest are starting to open up again although 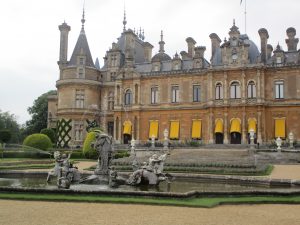 things haven’t quite got back to normal. Although the house and grounds officially close at 5pm we stayed much later as we walked around the grounds and visited the bird aviary. The grounds become magical once every-one has gone home and it’s often the best time to enjoy them, which we did having it all to ourselves!

The following day I took Fay to the Wardown House Museum and Gallery off the Old Bedford Road in Luton. Monday can often be a difficult day as many museums and places of interest are closed. I’d never been to Wardown House before but I had heard tell of it’s wonderful hat collection spanning the last 200 years and the Bedfordshire & Hertfordshire Regiment Museum which is all housed within the house. It has a collective mix of artifacts including musical instruments and a toy museum which took me back to my childhood. Sadly the tea room wasn’t open so I took Fay to Frosts Garden Center in Woburn Sands for lunch afterwards and then onto John Lewis for a little retail therapy.

For Tuesday’s day out we were up and out bright and early as we headed north to The Black Country Living Museum in Dudley. For those of you who like your TV dramas you will know it’s 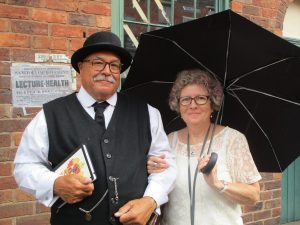 one of the locations used in the filming of the BBC series Peaky Blinders. I’d been wanting to visit the museum for ages as it has a wonderful display of vintage streets telling the story of how working class people lived their lives back in the day.

It’s hard to imagine a time before bathrooms and flush lavatories, but seeing sawdust on the floor of the local pub and how grim sanitation was for working people it makes you realize just how far we have come in the last 100 years. I particularly enjoyed walking down the street and visiting the gentleman’s outfitters and radio shop.  Only the weekend before the museum had had a 1940s 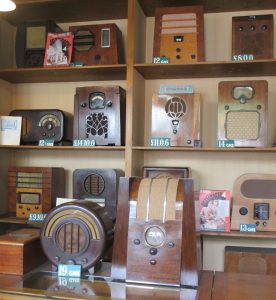 Inside the Radio Shop!

weekend but unfortunately they had brought the wrong tape for the windows and the museum were still trying to scrape the sticky off the glass.

Not an easy job and although on our day the museum was in 1900 mode it didn’t spoil our enjoyment as Fay and I chatted to some of the re-enactors who are employed by the museum to play various vintage rolls. I can see why the BBC choose if for their location and I hope it wont be too long before I have the pleasure of visiting BCLM again. I loved it!

The following day it was time for Fay to go home as I took her to the station and started to prep for my Bletchley Park show. I shall tell you more about that in my next blog but for now I shall leave you with a few of my photos. 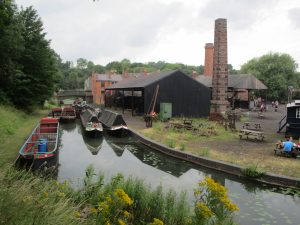 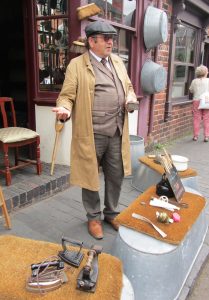 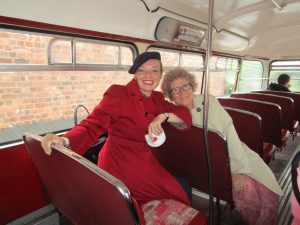 Fay & I Taking a Trip on a Double Decker Bus!