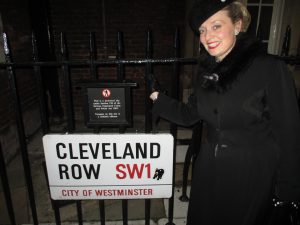 The weeks are rolling by and already April is just around the corner. I have so much to do and squeeze in before I start on the Easter season which this year will involve Paul and I flying out to Milan to perform for Lodivecchio’s Historical Commemoration event. I can’t wait although I need to find some time to go over my Italian songs in particular the Italian national anthem. With the launch of “My Fair Lady”  and last weeks tour March has been a busy month. I only have three days left to prepare as I’m now fully booked from 31st March through to the 1st May. 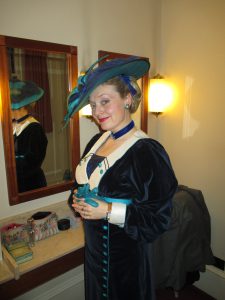 Back-stage in the Powder Room!

This week I’ve been working away down in the Chichester area with Paul, performing a variety of different shows. Although my best seller is now “Thank-you for the Music” which incorporates all those popular tunes from the 1950s, 60s and 70s. When it comes to the music of Sinatra it’s amazing just how many decades it seems to cover and Paul’s performances always go down well. I’m looking forward to performing “My Fair Lady” again on the 2nd April as the show gets better and better every time I perform it. I’m also keen to make a promo film to sell the show to a new client base and to re look at my web-site lay-out which is in need of an overhaul. Just a couple of the bees I have buzzing around my bonnet at the moment which I must get to before long not to mention all the musical arrangements I want to put into production for Christmas.

On Wednesday Paul and I had the pleasure of working in 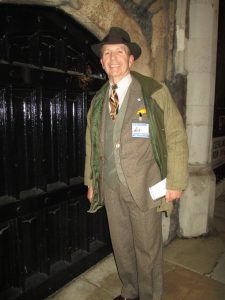 London at St James’s Palace for a special event hosted by the Woodland Trust. Every so often a job comes along which is just that little bit special and this was no exception. Once you step across the thresh hold of Palaces one’s in a completely different world with a whole new set of rules which must be adhered to and understood. The advantage of this is I only have to sing and the worry of unloading and setting up sound equipment is no longer my concern when they have people to do this on my behalf. Such a luxury and dare I say a relief as Paul and I would have been terrified of inadvertently scratching the paint work while carrying in my speakers.

On this occasion I had been engaged by The Woodland Trust to perform songs from the Music Hall and WW1 era in costume for their drinks reception in the Queen Anne Room. The dinner and drinks reception was hosted to commemorate the planting of a million trees over the last four years 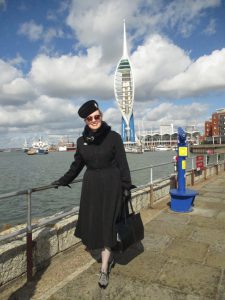 Out and About in Portsmouth!

to remember all those affected by the first world war which  was attended by the Princess Royal. I had a prime spot as I sung in front of the fire place which made it easy for me to see every-one as they arrived.

Princess Anne wore a pretty powder blue brocade evening skirt and matching jacket with a shawl colour. I noticed her satin shoes had been dyed to match and I was surprised to see she is about the same height as myself. I imagined her to be much taller as she chatted to the guests.

It was a wonderful experience and an honor to be invited along with the WW1 re-enactors who brought along a fabulous display of WW1 memorabilia which included a portable trench piano.  Sadly the taking of photographs inside the Palace is forbidden which is such a shame as I would have loved to have shared some of my visual experiences with you all. 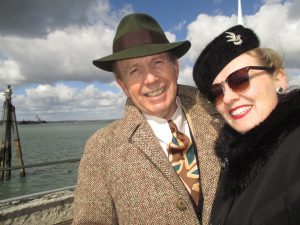 Paul and I Between Shows in Portsmouth!

The quality and the size of some of the paintings on display are a feast to behold not to mention the mantel clocks which I think might have been 18th century. The one which stood behind me on the mantel piece in the Queen Anne room was very impressive not to mention the one which sat on a huge table I passed on my way through to the ladies powder room. I was particularly taken by a beautiful portrait of King Charles I which hung to the left of the stairs with another portrait of King Charles II to the right. 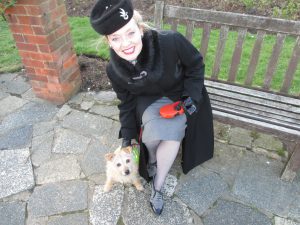 would have loved to have had the opportunity to explore. It’s the most senior of royal palaces in the UK and although no longer the principal residence of the monarch it is the ceremonial meeting place of the Accession Council and the London residence of several minor members of the royal family.

Now it’s back to the music of the 50s, 60s and 70s with next weeks shows with the run up to mothers day. In the meantime i shall leave you with a few pictures of Paul and I out and about in Portsmouth with Poppy.