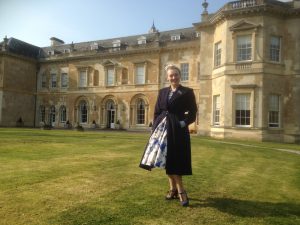 Once again I’m burning the midnight oil and apologizing for this weeks belated blog. It had been my intention to blog on Monday evening but since returning home from St James’s Palace and my South coast tour I’ve had a lot to arrange and plan for. I’ve been out and about performing and planning the future. This is my last free day. I now have a steady run of shows all through April and well into May which will be a mixture of Easter Bonnet and Pearly Queen performances to tie in with the Spring season. 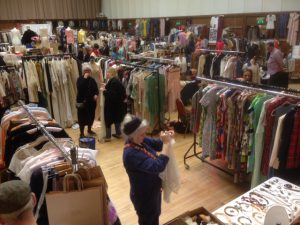 The Wonders of Hammersmith Vintage Fair!

wall planner in front of me and the realization that I have 26 shows to perform between now and the 24th April which is when Paul and I will be flying out to Milan. The Mayor of Lordivecchio  has requested I sing the Italian National anthem during the raising of the flag and “Requiem for a Solider” for all the American re-enactors who will be attending this event. I confess it’s been a while since I last sung the Italian National Anthem and although I can remember most of it I can’t remember how to pronounce the word “Stringiamci”.

I’ve made a promise to myself to sing the anthem 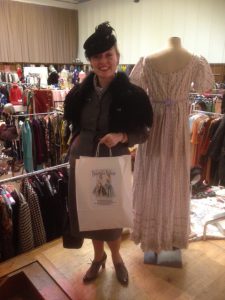 ten times before I go to bed each night so by the 25th when I perform for the ceremony I will be well rehearsed and on my game. Paul and I have been engaged to perform American swing tunes from the 1940s in American uniform so we are looking forward to Lordivecchio very much. I shall also be singing Italian Opera and Paul and I will be returning to Italy in October when we have been engaged to sing for Graffignana’s Vintage Festival.

The 40s season is getting underway and I expect many of you have already caught my add in “The Best of British” magazine this April, which features all the 1940s events for the year. You can find Paul and I on page 55 and this time we have listed our public engagements for 2019.  So if you haven’t got your copy yet do pop down to WH Smiths and we hope very much to see you at some of our events. 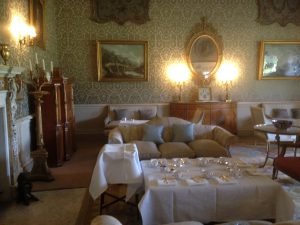 Speaking of events a week Sunday I made it into London to the Hammersmith Vintage Fashion fair as it’s important to change my vintage wardrobe and to have a fresh out-fit with the change of season. I found just what I was looking for a chocolate brown 40s suit which I can take out to Normandy and will go with a mustard coloured hat I’ve been longing to pair up. I haven’t as yet worked out my fashion colour pallets for the year but as I have a number of 40s events it’s important to have a good selection of out-fits which can be accessorized in all sorts of colourful and creative ways. The wonderful thing about 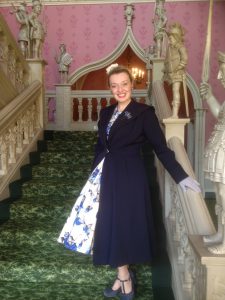 The Principal Staircase with Balusters!

Hammersmith’s Vintage fashion fair is it’s very inspiring. Vintage textiles utilise all sorts of unusual colour combinations which in turn inspire how I put my out-fits together.

Last Saturday I took my mother to Hartwell House in the vale of Aylesbury for mothers day weekend. We had lunch in the Spar Cafe and afterwards we were granted special permission to look around the house and grounds. The house is now owned by the National Trust and is a Historic Country House Hotel. Hartwell has a remarkable history stretching back almost a thousand years to the reign of Edward the Confessor. True to the English tradition it has evolved with the changing tastes and times and has a Jacobean facade.

The Great Hall is a masterpiece of English baroque design and the house has fine Georgian interiors dating from around 1760. The morning room and the library are decorated in the 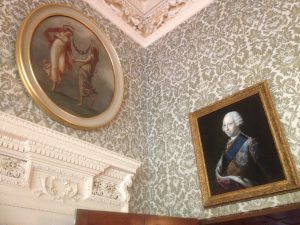 Rococo style and while I was there I was lucky enough to have my photograph taken on the principal staircase. The staircase is renowned for it’s extraordinary cared figures which are party Jacobean and partly modern. Two of the balusters are carved to represent Winston Churchill and G K Chesterton the famous writer, poet, philosopher, dramatist, journalist and orator. It was a wonderful experience for my mother and I to be granted permission to see the house as we both have an interest in historical architecture. My mother never goes anywhere with-out her guide books. It was a real treat to visit and I hope very much we shall have the pleasure of doing 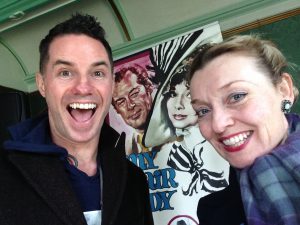 Meeting Up with Film Maker Judson!

so again in the future.

Today I had a meeting with film maker Judson of Dragon Egg Media at Norcot Court. It had been my intention this year to plough on with the next stage of my showreels at the Limelight theater and to film my songs from the 1970s and 80s. However by a twist of fate I’ve had to put that on hold and I’m now going to make a promo film of “My Fair Lady”, thanks to my friend Julius and the Rost family who have very kindly given permission for us to use their fine county house as a location. To-day Judson and I looked at the room 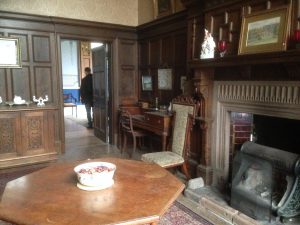 On Location at Norcot Court!

spaces and talked about how the film was going to be shot which is all very exciting. We will be shooting just before Paul and I sail out to France for the D-Day commemorations, so we have a lot to squeeze in.

This week I performed the first of my Easter Bonnet shows and yesterday I sang for Cedars School Hair and Beauty Academy’s Hair and Make-up show. I had been hired to sing for the 1940s “The Way We Were” section as students came out with their 1940s hair dos and the Little Lovvies danced to “In the mood”. I also sang the Andrew Sisters for “Strictly Come Cedars” while 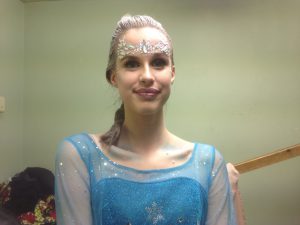 Make-up and Hair for Disney’s Frozen!

I enjoyed looking at the different hair and make-up styles which included Disney, Fantasy, The Oscars, Fairies and an Afro showcase which was wonderfully colourful and vibrant to watch.

That’s all my news for now as this weekend I will be performing at West Essex Golf Club in Chingford. Keep Following and Toodle Pip!