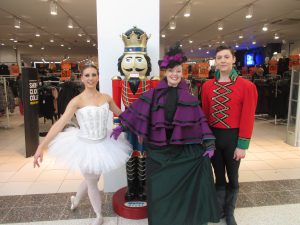 Me with The Nutcracker Ballet! 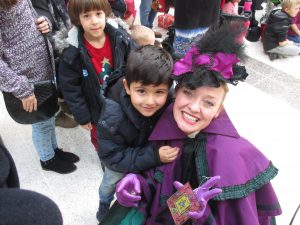 A Christmas Tree Gift from Ali!

Hello every-one I’m sorry I’ve not blogged this last week but as you might imagine I’ve been busy performing Christmas shows which are taking me here there and every-where. I’ve been performing two shows daily for much of this week and I will continue to do so right up until Christmas Day it’s self. Rather unusually I have Christmas day off this year so I will be enjoying Christmas at home with my family before I get ready to step out for the new year as I head down to Emsworth and then onto Bournemouth.

Last Sunday Paul and I were in Aylesbury. I had been booked to perform for the Aylesbury Council a Nutcracker Christmas in Friars Square. This job  was much more fun than usual as I was working with elves, stilt walkers, circus entertainers and ballet dancers as we all worked together to create that magical Nutcracker theme for the Aylesbury audience. They also had lots of creative events for the children to join in with and one little boy named Ali very kindly made me a Christmas decoration for my tree which I thought was very kind. 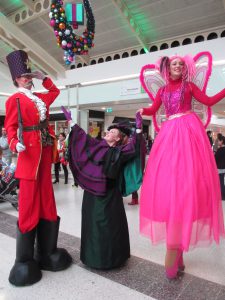 was extremely enjoyable as the council provided the rig and sound engineer while Paul loaded my music. It’s been ages since I was last in the heart of Aylesbury from the point of view of a shopper and it’s amazing to see just how much the center has changed. Friars Square is indoors which made my job so much more enjoyable. A few years ago I was performing out doors a Dickensian Christmas in Rochester which was jolly cold. I also came down with flue at the time but this was so much warmer and so much nicer to do. So thank-you Aylesbury Council for inviting me. It was lovely to sing for you all and meet the Mayor.

Of-course when it comes to show business you never know what’s going to happen and what might be around the corner. On Thursday I had two shows back to back. The first was a 2.15 pm performance in Beaconsfield and for my second show I was due to step out on stage at 5 pm in Holmer Green.  Well no sooner did I set up my rig and Holmer Green was hit by a power cut as the whole 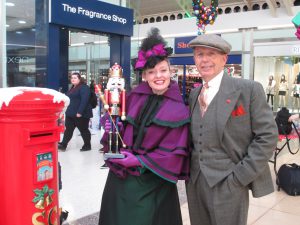 Paul and I meet the Nutcracker!

village was thrown into complete darkness.  Not a problem! The audience lit the stage for me with their mobile phones and I performed material from my old stand-up one woman show routine, poems and sketches while I talked about my life in show business. What can I say the show must go on – even if it was a little different from what was originally advertised! Power was restored ten minutes before the end and I finished the show with a good old fashioned sing-along as every-one joined in with “White Christmas”.

Tomorrow I’ve another two shows back to back which is the case for the rest of the week, so if I don’t get the chance to blog again before Christmas please let me take this opportunity to wish you all a very M 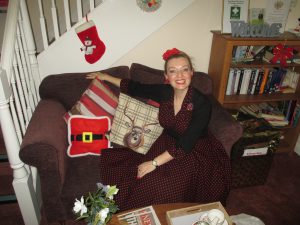 Between Christmas Shows on Saturday!

erry Christmas and thank-you for following me through 2016. As for 2017 I will have more on that in the new year as I continue with my filming. I saw the cut of my 1940s and 50s show-reel last night which is coming along nicely and I’m looking forward to sharing that with you in the new year.

In the meantime have a lovely Christmas and Toodle Pip! 😉