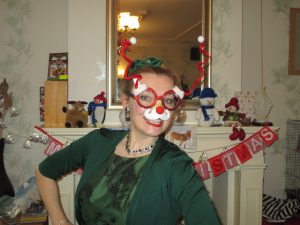 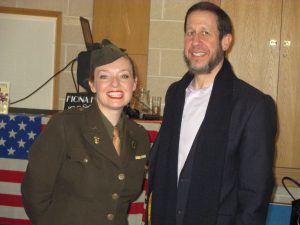 Me with Rabbi Yitzchak Schochet!

I’m afraid once again I’m in a bit of a dash writing my blog for you this week. I wanted to make sure I didn’t miss you all and I was keen to post a blog before the big day. I’m between shows as I’ve been out performing two shows daily all this week and I’ve rather lost count. I think I may well be up to 31 shows this month so far out of 36 or is it 38 – I’ve forgotten!

It’s been an interesting week as I’ve been performing both “Rocking Around the Christmas Tree” shows with “Chanukah” the Jewish festival of lights. The Jewish calendar is taken from the lunar cicale which is why Easter constantly changes in date due to the fact it revolves around the Pass over feast which is marked by the Jewish calendar.  This year is a special year as both Christmas Eve and Chanukah fall together which is quite unusual and it’s being celebrated from the 24th December through to the 1st January.

I have to confess that when I took the booking I wasn’t quite up to speed with the history behind the celebration so for those of you who are curious to learn more here is a brief description.  Hanukkah (Hebrew: חנוכה‎, alt. Chanukah), also known as the Festival of Lights, is an eight-day Jewish holiday commemorating the rededication of the Second Temple in Jerusalem at the time of the Maccabean Revolt of the 2nd century BCE. Hanukkah is observed for eight nights, starting on the 25th day of Kislev according to the Hebrew calendar, and may occur from late November to late December on the Gregorian calendar.

The festival is observed by the kindling of the lights of a special candelabrum, the Menorah or Hanukiah, one light on each night of the holiday, progressing to eight on the final night. An extra light called a shamash, (Hebrew: “guard” or “servant”) is also lit each night, and is given a distinct location, usually higher or lower than the others. The purpose of the extra light is to adhere to the prohibition, specified in the Talmud (Tracate Shabbat 21b-23a), against using the Hanukkah lights for anything other than publicizing and meditating on the Hanukkah story. (The shamash is used to light the other lights.)

After reading the above description of Chanukah I expect many of you may be wondering how many songs I have in my repertoire date back to the 2nd Century and are about light. Well none of course and I’m not sure if any songs survived from that time anyway although moving things forward I was asked to perform my American WAC 1940s “Stars and Stripes show” as much of the music comes from the Great American Song Book.  If you know your music you will know the five greats were all Jewish, Berlin, Porter, Gershwin, Rodgers and Kern. Of course it easy to forget the other two Mercer and Styne but they were just as great in there own way. Mixed in with Glenn Miller and Andrews Sister arrangements the show proved to be a real hit with the audience and made a pleasant change from singing “Rocking Around the Christmas Tree” and “White Christmas”. 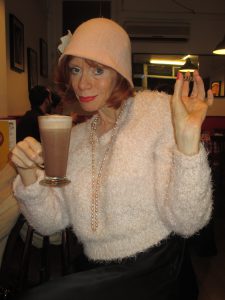 Dinner and Coffee with Lynda!

On this occasion I was booked to perform for the Mill Hill Jacs club which always give you a wonderful welcome and excellent hospitality. After my show Rabbi Yitzchak Schochet delivered a wonderful routine in Jewish stand up which made me laugh. Apparently Jewish people aren’t very good at DIY  which must be true as all the ladies were laughing and prodding their husbands when he said it. Thinking about it I’ve never come across a Jewish building firm but that doesn’t mean there isn’t one somewhere. I’m looking forward very much to returning to Mill Hill Jacs next year with my 20th Century Show.  Next time I will be performing 100 years of popular music from 1900 to 2000 which I know the club will really enjoy as I will do singing the songs. Afterwards I caught up with my friend Lynda in Finchley over dinner and enjoyed a good girly natter which is always fun!

I’ve just got back from my second show today and I’m now back at my desk it’s time to bring my blog to a close. Tomorrow I’m in Marlow and I hope very much to make it back in time for Midnight Mass. So I guess all that’s left for me to do is to Wish you all a Very Merry Christmas and a Happy New Year. Thank you for following and I look forward to catching up with you in the New Year when I return home from Bournmouth.

Toodle Pip and Best Wishes for the Season!