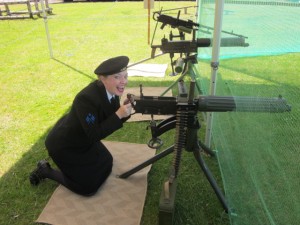 Me Shooting the Hun WW1 style 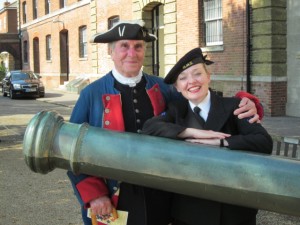 Out and About at The Royal Marines Museum! 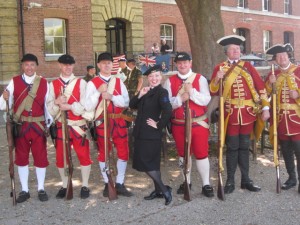 Me with the New France Old England Show!

What a busy weekend it’s been with me taking on a different sort of role, working as a compare for the Royal Marines Museum down in Southsea. In fact I did make a mistake and say the National Royal Navy Museum in my last blog. They are in fact two different places even though they come under the same banner and the Marines Museum uses all the same paper work. This weekend was a rather special event for the museum as it was celebrating 350 years of the Royal Marines with a Journey through time and they had lots of re-enacters recreating the history. I know I shouldn’t say this particularly as I spend most of my time recreating the 19th and 20th centuries but I am rather fond of the 18th century and I feel quite at home in a corsett and panniers. It seems to be the only century where it was quite acceptable to be in fancy dress all the time which might explain why I don’t feel at all out-of-place. It  makes a wonderful change from the 1940s! However saying that I was booked to compare as a WW2 Wren and I really enjoyed meeting and introducing all the different re-encters from the Trafalgar Drummers to the New France Old England Show, The Society of King George the Third and Tim Lowe who told the story of the Cockleshell heroes through the words of Bill Sparks VC. Sadly I wasn’t able to be at the Museum for the full two days as I had to dash back to Princess Risbough for a WW1 /WW2 “Songs that won the War” show today- but I can honestly say I did make the most of my time there. One of my highlights was having a go on the shooting range with a WW1 weapon and yes I even shot down a German plane – well sort of! Just doing my bit for the War effort! Check out my photos on facebook!

Today I have been singing lots of songs from WW1 and WW2 and I’m due to be in the recording studio again on Friday to pick up a couple of new tracks. I’ve had a new track made of Marie Loyd’s “Don’t Dilly Dally on the Way”. The track I’ve been using up to now is one I commissioned back in the 90s and was long over due for a replacement. Richard has very kindly e-mailed me through his arrangement tonight which sounds super. I’m also picking up another song from WW1 called “I’ll Make a Man of You” which I must learn this week. I’m in Birmingham for the city council on Saturday for Armed Forces Day  and I’ve been asked to perform 3 sets, one WW1, one 1940s glamour and for my final set ATS “We’ll Meet Again”.

My WW1 shows have really taken off this year as I’m the only one I know who covers this period in a way which suits the modern world. I commission all my music which means I can be much more creative and so many new doors have opened for me as a result. August has gone crazy with 35 shows sold so far which will be  taking me up to Scotland and Wales the Isle of Wight  and then I’ve been booked to do some filming in September before heading off to Belgium so busy busy!

I’m looking forward to getting back in the gym and catching up on paper work tomorrow  so I shall leave it here tonight. I’ve now found the spell check for my blogs so I hope my spelling is better tonight. I’m still having problems with positioning my photos but I hope I will be able to master that in time, at the moment it masters me.