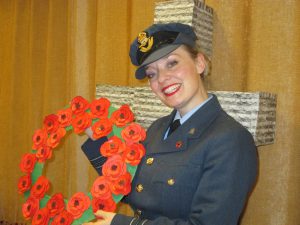 On Stage at Stokenchurch! 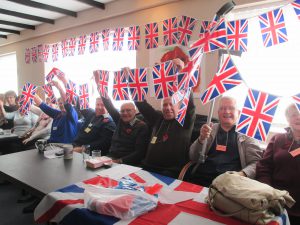 Singing for The Friday Club! 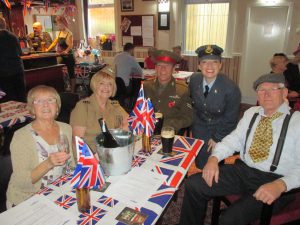 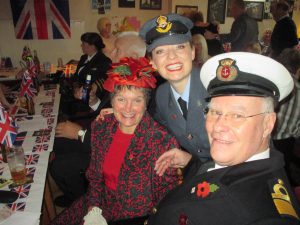 All Dressed Up at Foulridge! 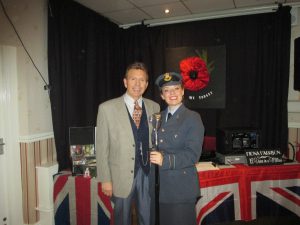 These last ten days have been all about Remembrance and this last weekend Paul and I were performing up in Lancashire. On Friday I had two shows back to back. The first was an 11am show to tie in with the two minutes silence for the Leighton Buzzard Friday Club and then for my second show I was booked to perform in Stokenchurch. So often when I’m engaged to perform for remembrance I’m booked to perform my ATS “We’ll Meet Again” Show although this year has been a little different. The trend has been for RAF WAAF shows which has ment I have been able to bring in a few new numbers and give my military shows something of an airanaughtical flavour.

On Saturday I was booked to perform in Manchester at Wythenshawe before Paul and I continued our journey on up to Foulridge. I had been engaged to perform three day time sets at Foulridge Social Club for Remembrance Sunday so it was important that Paul and I arrived in town the night before. The club had booked us into a lovely hotel The Craven Heifer Inn which was only 3 minutes away from the club in the town of Kelbrook. We had a beautiful room and dinned in the Hotel that evening  which I would certanly recomend. On Sunday it was nessasery for Paul and I to arrive early at the club so we could set up before every-one had arrived.

When the members did arrive they had all dressed up and entered into the spirit of the 1940s. The club had been decorated and decked out in posters and flags. It was my first time at The Foulridge Social Club which had a wonderful atnospher as everyone joined in with the music. Durring the course of the day the members were able to raise over £1000 for Wings the RAF Benevolent fund and I performed in my RAF WAAF uniform to tie in with the theme. At the end of my third set I changed into a glamorous 1940s suit and finished the show with “Land of Hope and Glory” and God Save the Queen. I’d like to say a big thank-you to Jan and every-one at the club who worked so hard to make this Sunday so special. Thank-you so much for inviting me, Paul and I had a fantastic time and it was a delight to sing for you all.

Today I’ve been performing my ATS show in Aylesbury and tomorrow I’m down in Ruislip singing “We’ll Meet Again”. On Friday you can catch me on stage on Hayling Island at The Royal British Legion performing a WW1 double act with my friend Lynda Styan. This show has been booked to tie in with 2016 and The battle of the Somme aniversary. The client requested a double act rather than a solo artist so I’m looking forward to working with Lynda again. 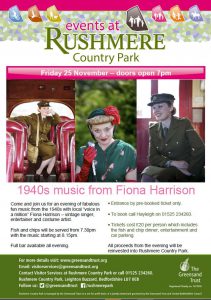 That’s all my news for now other than my spell check has gone on this program and my blogs don’t seem to be going through to facebook like they ought. Rachel is on the case and I shall keep you posted. Don’t forget you can catch me in Leighton Buzzard on Friday 25th November performing for The Greensand Trust at Rushmere Country Park. Details can be found on the poster.

Toodle pip and Bye for Now