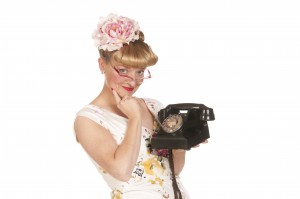 Me Being Prudie Jones!

Hello every-one since returning from Southsea I have been at my desk daily taking on the role of my alter ego Prudie Jones the ever efficient secretary as I sort out contracts and plan the year. In fact 2015 is shaping up well and some lovely bookings have come in which I’m looking forward very much to playing. Prudie and I have gone through an enormous amount of stamps this week not to mention the e-mails we’ve sent out and I’ve now almost caught up which is very encouraging. Dispite being Prudie I’ve also found time for myself and I’ve been out every-day exercising – in the gym or running . I want to lose a little weight and tone up a bit. I spent much of 2014 travelling which didn’t always give me the time I needed to exercise so it’s been good to get back into a routine. I’ve much to do this month paperwork wise and I’m looking forward to meeting up with Rachel my web-designer next week when we put together the final touches to my Schools page which we will be adding to my web-site very shortly. Some of you may have noticed we have changed my CD add on my home page from holly to art deco corners just to keep things current with the change of year – although I have to admit I rather miss the holly as I enjoyed seeing that splash of green!

I was speaking with the “Best of British” magazine this month and I would like to thank every-one who entered the competition in November to win one of my “Good Old Days” Music Hall albums. Apparently 290 of you entered so thank-you every-one for taking part. As for this weekend I haven’t quite decided what to do. This Sunday Hammersmith are holding their Vintage Fashion fair and I’m quite tempted to go. It’s been ages since I last had the chance to go due to my singing commitments but we will have to see.

That’s all my news for now. Thank-you for following and Toodle Pip!