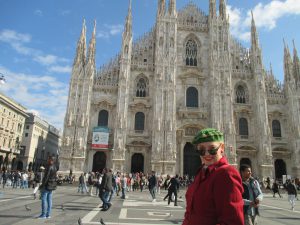 It’s not everyday a soprano can boast she spent her birthday at La Scala but that is precisely what I did this Monday. After the excitement of performing for the people of Graffignana at the weekend our hosts very kindly took Paul and I into the centre of Milan to enjoy the sights. I had particularly wanted to see the cathedral  The Duomo which is one of the largest churches in the world.

Building work on the cathedral started at the end of the 14th century in 1386 and continued over centuries. It’s very impressive and astonishing to look at with an amazing number 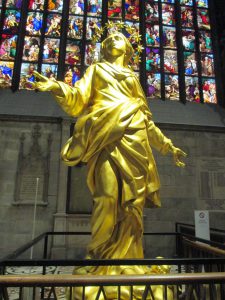 of spires and statues. It sits right in the heart of Milan and has no shortage of carved marble. I have to confess the cathedral struck me as having a slight Dr Who “Tardis” quality. You certainly can’t miss it, but when Paul and I went inside it gave the illusion of being even larger on the inside than out. There’s much to see including The Madonnina which is the affectionate name given to the Milanese, the statue which stands on the top of the great spire. The people of Milan belive that the Madonnina protects their city and thanks to her statue the total hight of the Duomo is 108.5 metres tall.

It was crafted by the goldsmith Giuseppe Bini and was placed on the spire in 1774 which just makes my mind boggle at the thought. How did they do that in 1774? The Madonnina is 4 metres tall and it’s a very long way up to that spire! It is possible to take a walk up onto the roof 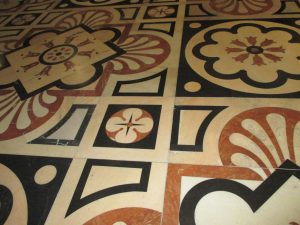 The Marble Flooring Designed by Tibaldi!

terraces although Paul and I didn’t have the time to do so on this occasion so we settled for admiring The Madonnina inside The Duomo. I’m not sure if the original is still on top of the spire or in the church, but either way I took a picture of her in the cathedral. The other thing I liked were the marble floors. These were designed by Tibaldi and the laying of which started in 1585 and continued for centuries. The black marble is from Varenna and the red marble comes from Arzo which makes up the elegant and decorative design.

Ofcourse no trip to Milan would be complete 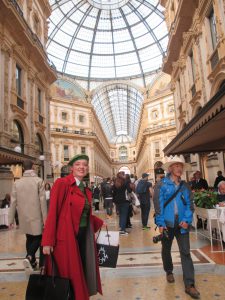 without a little bit of shopping with it being the Fashion capital of world. Just outside The Duomo is the beautiful shopping arcade known as the “Galleria Vittorio Emanuele”. It’s a covered passageway in the shape of a cross featuring mosaics and has a gorgeous glass roof with elegant wrought ironwork. One of the most famous mosaics is the bull. It’s said that if you put your heel on the bulls genitals and turn three times it will bring you good luck which of course I had to do. However while I was there a man told me if you turn just once you will meet your man and as I met up with Paul half an hour later it clearly is true!

Milan has some beautiful shops and there are no shortage of designer names. Everywhere you look you see Versace and Prada and one of the fashion trends I noticed while I was in town was a trend for studs. I saw them on shoes, 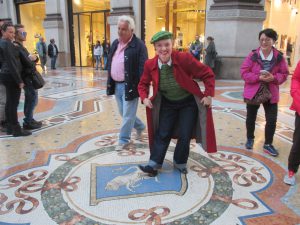 bags, trousers so no doubt in a couple of years the stud trend will filter its way over to the UK. I even saw a pair of gloves covered in studs when I was at the airport. I love my accessories and I have a passion for gloves so it was rather lovely to visit the glove shop in the Galleria Vittorio Emanuele which was able to offer every colour and in any size. When it comes to gloves I have very small hands and I take size 6 1/2. It’s hard to get proper glove sizes in the UK  now but I’m pleased to say you can still get a glove to fit like a glove in France and Italy. I also saw a trend for capes so maybe that is something else we will all be 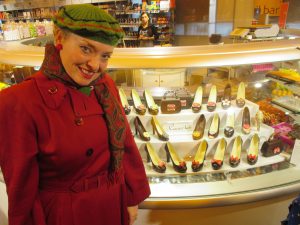 wearing in the next year or two.

While we were in Milan our host Elisabetta took us to lunch at “La Rinascente” which is Milan’s equivalent to Harrods. Up stairs on the 7th floor are a selection of different eating establishments along with the stores food hall. While I was there I fell in love with the chocolate shoes. Yummy – shoes and chocolate combined how could a girl ask for anything more! 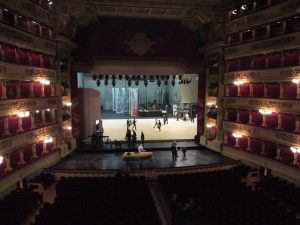 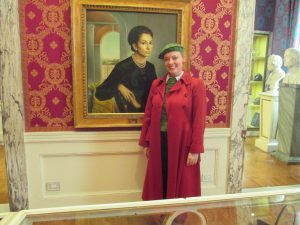 Me with Maria Callas! 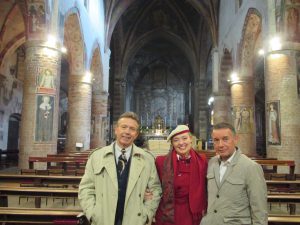 Paul, Guiseppe and Me at San Francesco! 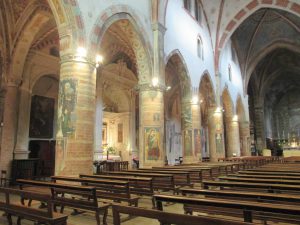 La Scala which also houses a wonderful museum. I often think Opera is one of those art forms that really can’t be done on the cheap. It needs spectacle and a full orchestra to make the scores come alive. The greatest Opera singers in the world have all sung at La Scala and when you see the theatre you get a sence of some of the fantastic productions and performances which must have taken place on that stage. The museum has some beautiful portraits and no shortage of busts so I couldn’t resist the opportunity of having my photo taken with Maria Callis. I also enjoyed looking at the costumes and the photos of past productions.

That evening Guiseppe our host took us all out for a meal to celebrate my birthday to a local restaurant with a few of the re-anactors. On Tuesday he then kindly took Paul and I with translator Luca to the town of Lodi where we visited the church of San Franceco. Lodi is famous for its churches of which I belive there are 3. It is a substantial town that was originally developed 2000 years ago as an important town on the Roman transport routes in the region. It is now an attractive medieval town to explore with a great deal of character. Sadly we only had time to visit the one church but I’m so glad we got the chance to see inside San Francesco as it has no shortage of beautiful paintings, which can be seen on the pillars and walls depicting saints.

All good things have to come to an end and Paul and I were booked to fly home that night. We have both had a fantastic time in Italy and I would like to take this oppertunity to thank Guiseppe, his family and all the people of Graffignana for making Paul and I so very welcome.  We hope very much to return one day.

I shall leave my blog here tonight although next week it’s the run up to Trafalgar Day with Wren’s shows, but more on that in my next blog.