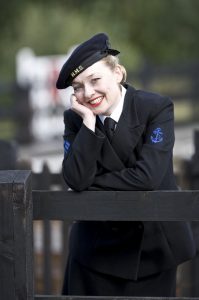 The Fleet’s in Port Again!

As you can see I’m back in the UK after my performances in Italy so it’s time to get ship-shape and Bristol fashion with my next a run of shows. It’s Trafalgar Day on Friday so perhaps not surprisingly I have a run of Nautical Wrens shows with a Music Hall show booked in for Wednesday. For this show I will be working in London with my friend Lynda Styan for The Royal Variety Charity at Brinsworth House. We have been booked to put on an Old Tyme Music Hall  and between us we have a great show planed which will be including all those wonderful songs from “The Good Old Days”.

If you know your history you will know Trafalgar Day falls on the 21st October so I will be spending much of this week in Navy uniform.  If you are not quite up to speed with what Trafalgar was then let me fill you in with this description. 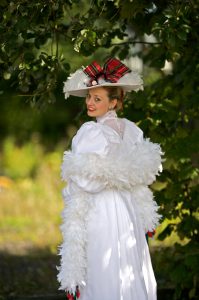 fleets of the French and Spanish Navies, during the War of the Third Coalition (August–December 1805) of the Napoleonic Wars (1803–1815). Twenty-seven British ships of the line led by Admiral Lord Nelson aboard HMS Victory defeated thirty-three French and Spanish ships of the line under the FrenchAdmiral Villeneuve in the Atlantic off the southwest coast of Spain, just west of Cape Trafalgar, in Caños de Meca. The Franco-Spanish fleet lost twenty-two ships, without a single British vessel being lost. It was the most decisive naval battle of the war, conclusively ending French plans to invade England.

The British victory confirmed the Royal navy’s supremacy that Britain had established during the eighteenth century. Nelson was shot by a French musketeer during the battle and died shortly after, becoming one of Britain’s greatest war heroes. This is a day which is celebrated by the Royal Navy every 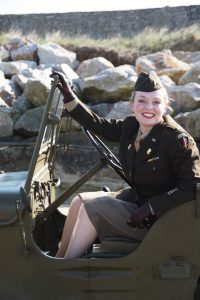 All Set for Hudson’s Blitz Party!

year. At the dock yard in Portsmouth you can still see Nelson’s flag-ship HMS Victory which flies the naval flags as a mark of respect every year on this special day.

When it comes to putting together a show to commemorate this date most of my music comes from the 1930s and 40s which ties in with the date of my WRNS uniform. However I do include “Rule Britannia” which as we all know was written in the 18th century and just perfect for the 21st.

Oddly enough when it comes to the 21st October this year I’ve been booked to perform something a little different. A British/American WAC show at Hudson’s Ale House in the town of Trumpington. It’s to celebrate Hudson’s 1st Anniversary and to celebrate they are staging a 1940s Blitz party to which you are all invited. I will be on stage in my WAC uniform from 9pm – 10pm and you can find out more information by visiting Hudson’s  web-site at www.hudsonalehouse.co.uk/

I shall leave my blog here tonight. Keep Watching and thank-you for following and I look forward to seeing you all at Hudson’s Ale House!