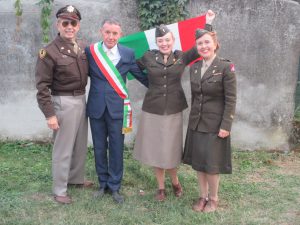 Paul and I with Giuseppe and Francesca! 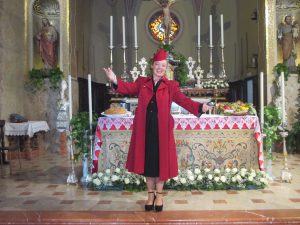 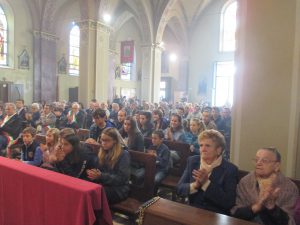 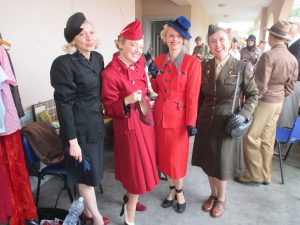 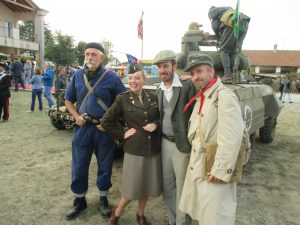 Meeting up with Italian Re-anactors! 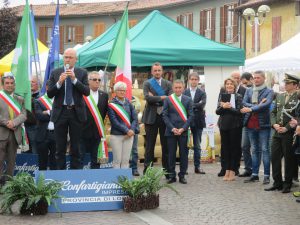 The Important People of Graffignana! 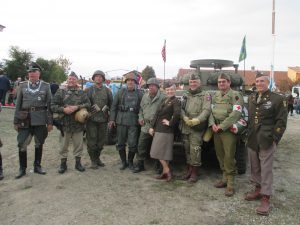 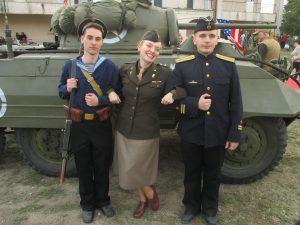 All the Nice Girls Love a Sailor!

Hello every-one it’s been a fantastic couple of days that I’ve decided to split my blog into two posts as I have so much to share with you all. On Saturday Paul and I flew out to Milan. I had been booked to perform for Graffignana’s 1940s event which on Sunday attracted over 5000 visitors plus 200 re-anacters. On my arrival I had been engaged to perform Saturday night at the “Serata della Riconoscenza” and I had learnt the Italian National anthem for the occasion especially. I also wore my Italian flag dress which I had adapted from my French dress by changing the blue jacket to green velvet thus making the three colours of the Italian flag. This was exactly the right costume for Saturday nights show which went down very well with the Italian audience. I also sang a selection of Judy Garland tunes, “Diamonds are a Girls Best Friend” and finished with “Nessum Dorma”. You really can’t go wrong with Puccini as Italians love their Opera – as do I!

The wonderful thing about performing for Italian audiences they really appreciate good singers and applaud in the middle of a song if they think you have sung a particular note or phrase beautfully. This is quite different to British audiences who wait until the song is finished before applauding. It’s the same in Russia with ballet. Audiences often applaud durring a dance if they think the steps have been beautifuly danced rather than wait until the end.

I had been looking forward to Italy and this event very much. It was my first time to Milan although I have been to Rome a couple of times before. So often I find there is so much beauty to see I have to retun as I can’t take everything in on my first visit. On Sunday I had been engaged to sing Ave Maria for Holy Mass in Graffignana which was attended by all the dignatries and the towns people. I had met the organist the day before on Saturday when we had had a quick play through. It was a great honour to be asked to sing for Mass. I always enjoy singing in church as the ecoustics suit my voice perfectly and it was a great opportunity for me to sing in Latin, Schubert’s Ave Maria.

I had been invited to Graffignana by the mayor of the town Giuseppe Enrico Galetta who had seen me perform in Arromanches for the D-Day commerations in Normandy and liked the idea of having me  sing for his event due to the fact I have a large repotiore of 1940s American music and could sing in French and Italian. I had been engaged to perform my American WAC show for the Sunday afternoon but the song which went down best of all with all the re-anacters was the Band of Brothers theme tune “Requiem for a Soldier” which I sang at the start of the show after arriving in a 1940s jeep and at the end when all the re-anacters joined me on stage for the finale. I also sang “O mio Babbino Caro” from “Gianni Schicchi” and “Nessum Dorma” for the local people. Another song which went down very well was the french number “J’Attendrai” which one lady remembered her grandmother singing to her when she was a little girl.

Paul also joined me on stage and sang a couple of Frank Sinatra numbers including “Night and Day” which brought the house down. Both Paul and I would like to thank Giuseppe and all the people of Graffignana for their surport and kind generosity. On Saturday we were greated by translator Silvia who translated for me at the “Serata della Riconoscenza” and on Sunday by Francesca who joined me in church and on stage as she took Paul and I around the Italian market.  I was even able to pick up a beautiful pair of 1940s burgandy shoes thanks to Giuseppe’s generosity from a very glamorous Italian lady selling vintage clothes!

In my next blog I will tell you about spending my Birthday at La Scala and our vist to Duomo the large cathedral in the centre of Milan. I will also be writing about our trip to Lodi and our visit to the church of San Francesco.

So Keep Watching and Toodle Pip!