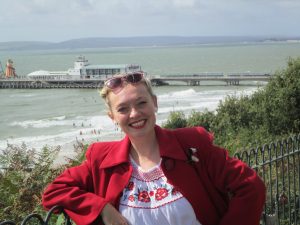 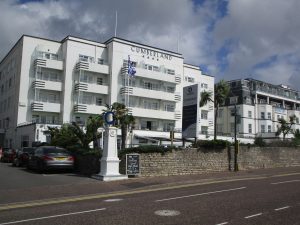 Our Bournemouth Hotel The Cumberland! 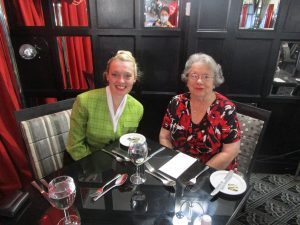 My Mother and I Dinning at The Cumberland!

Hello everyone. As you can see I’m back from Bournemouth after my mother and I made the most of our six days away. I’m now rushing to type up my blog between my bank holiday shows, which is why I’ve decided to split my Bournemouth blogs into two parts. It’s important to make hay while the sun shines and 2020 has been a topsy-turvy year to say the least. Nothing has quite gone to plan so to have a few days away was a real treat.

It’s been a year or two since I was last in Bournemouth. I often pop in from time to time with it being such a popular destination for entertainers such as myself. I’ve performed at many of the hotels and on this occasion my mother and I had booked to stay at The Cumberland – a beautiful Art Deco Hotel over looking the sea. It was built in the 1930s and sits on Over Cliff Drive which is a great place to go jogging in the morning which I made the most of.

The last time I sang at The Cumberland was for a Masonic Function back in the early naughties and it is just as I remembered it. It’s always a bit of a squeeze to get into the car park, but fortunately we were lucky and it was lovely to have a complete break from work. Our holiday was all about having a rest although we decided to take in a few of the sights which included The Russell Cotes Art Gallery and Museum which was just a short walk from our hotel and the costume Museum at Blandford Forum.

I love Victorian and Pre-Raphaelite Art and the Russell Cotes Museum houses a wonderful collection. The museum has an interesting history which you can read about below. 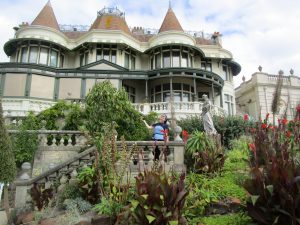 In 1901 Merton Russell-Cotes gave his wife Annie a dream house which he had built on a cliff-top, overlooking the sea at Bournemouth. It was an extraordinary, extravagant birthday present – lavish, splendid, and with a touch of fantasy.  They filled this exotic seaside villa with beautiful objects from their travels across the world, and lined the walls with a remarkable collection of British art, creating a unique atmosphere in a most dramatic setting. They bought the Bath Hotel on Christmas Day 1876 and later extended and extensively refurbished it, re-opening it as the Royal Bath Hotel in 1880. 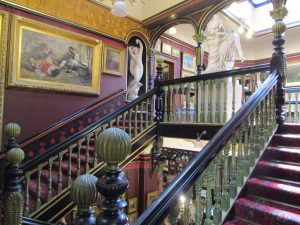 From 1884, the couple travelled extensively visiting Australasia, America, India, the Near East, Egypt, the Pacific Islands and Japan, collecting artwork and souvenirs. The resulting collections were displayed throughout the hotel’s public and private rooms, which gained a reputation for being an art gallery and museum. Many famous guests stayed at the hotel including the Prince of Wales (later Edward VII), Oscar Wilde, actor Sir Henry Irving, artist, Sir Hubert Von Herkomer and Sir Benjamin Disraeli.

Eventually the collections outgrew the hotel and in 1897, the couple commissioned the unique and 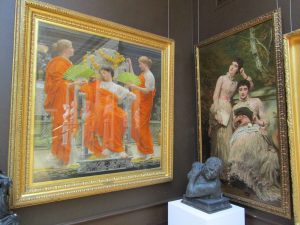 eccentric East Cliff Hall. The house (now a Grade II Listed Building) reflects Moorish, Japanese and French decorative styles alongside contemporary Victorian design. The interiors provide a context for their extensive collections of artefacts, furnishings, sculpture and paintings. Completed in 1901, East Cliff Hall was one of the last Victorian villas to be built in the town.

My mother has visited the Russell Cotes Museum many times, but for me this was my first visit, but it wont be my last. Despite having to wear a mask during these Covid times it didn’t spoil our enjoyment and afterwards we had tea in the café. 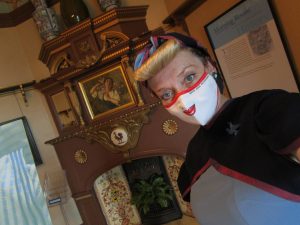 Looking Around the Museum!

I was curious to see if there were any works of art still hanging in the Royal Bath Hotel, but sadly not. I think Merton and Annie would be very sorry to see how the Royal Bath Hotel looks today which is a poor reflection on how smart it must have been during their life times.

Times are changing and it was sad to see The Pavilion Theatre closed and many of the shop units opposite empty. Paul and I were at The Pavilion a few years ago when we saw in the new year. Despite the Covid changes there are still artisans selling their wares which is always delightful to see, and Bournemouth still has one 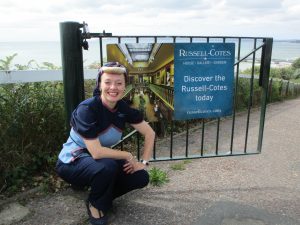 or two smart shops hidden away if you care to look – my favourite is “Imelda’s wardrobe” which sells the most divine shoes. Needless to say I couldn’t resist!

On Monday my mother and I ventured over to Blandford Forum to the Fashion Museum. This was my third visit as I first discovered the Museum by chance in the late 90s coming back from a show. The Blandford Fashion Museum is completely run by volunteers and you are always guaranteed a wonderful welcome. It’s located in Lime Tree House and was founded in 1996 by the 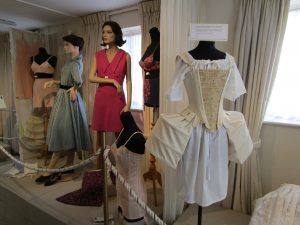 A Cavalcade of Costume at Blandford Forum!

late Mrs. Betty Penny MBE. The house is a beautiful Georgian property  built by John and William Bastard after the town’s Great Fire in 1731.

Mrs. Penny’s collection of costumes, known locally as the Cavalcade of Costume, form the nucleus of the present collection. However, since then the collection has almost trebled in size and continues to grow thanks to generous donations from the public.

The Arts Council gave the Museum accredited status in 2010, and renewed it in 2015. The last 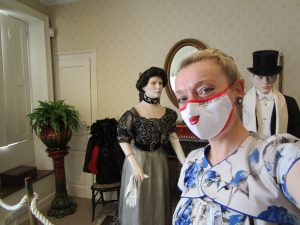 time I visited the Museum was 12 years ago so it was wonderful for us to see the collections again; this year featured the 1940s and Land Army to tie in with the 75th VE & VJ Day commemorations.

So often when I visit these places I’m just passing through but on this occasion my mother and I had more time to look as there is always plenty to see and we wanted to make the most of our holiday. In my next blog I shall tell you about our visit to Kingston Lacy at Wimborne Minster and my trip on the Bournemouth Circle Line Tour Bus. 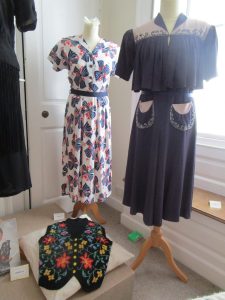 In the meantime I’ve been performing everyday over the August bank holiday with my Driveway Concerts which this weekend have taken me to Johnson Drive, Blakedown Road and Columba Drive – all around Leighton Buzzard. Next weekend I shall be in Pitstone and Weston Turville plus I have shows to perform during the week, as long as the weather stays bright. I shall leave you with a few pictures from Bournemouth with more news to follow in my next blog. 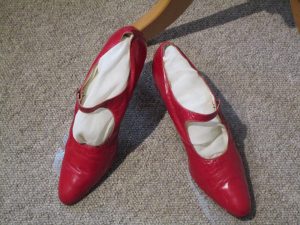