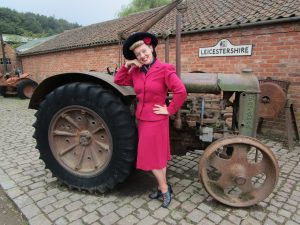 Down on the Farm! 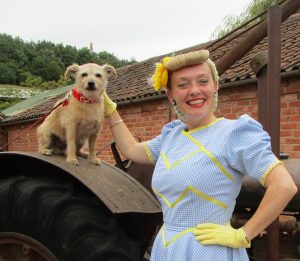 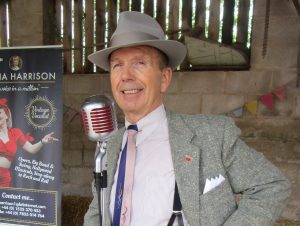 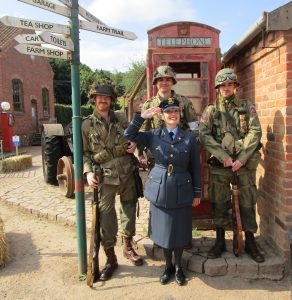 Meeting Up With the GIs

Once again I’m in something of a dash to get my blog out this week after Paul Marsden and I enjoyed a fantastic weekend of performing for Stonehurst Farm’s 1940s event. This year Poppy joined us too which was her first outing as a show biz dog, although I think she enjoyed curling up and sleeping in her basket more. With the Covid

restrictions we weren’t sure at one point if Stonehurst was going to go ahead, but fortunately being a farm there is more space which makes social distancing easier to achieve.

I always enjoy this event enormously, because it attracts a wider range of ages and different types of people from re-enactors to family groups, who often like to visit the tea room and see the animals. It was with families in mind that I decided to invest this year in a new “Wizard of Oz” medley arrangement. I only picked the medley up from the recording studio last Wednesday so Stonehurst Farm was my “Wizard of Oz” debut. Poppy makes the perfect Toto. She is really cute and looks great on 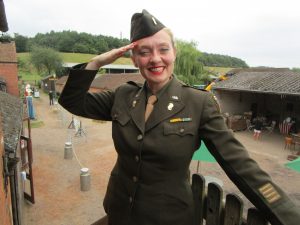 Stepping Out as a WAC! 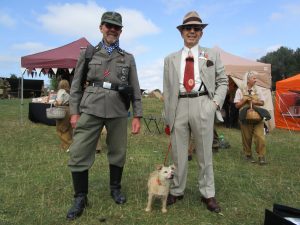 Paul and Poppy Meeting Up with Re-enactors!

camera – but she still needs to learn not to poo on the stage! Naughty Poppy…

I pride myself on my musical arrangements and once again Richard pulled out all the stops for me on the orchestration. He is such a whizz and I’m so lucky to someone of his calibre working with me as my musical arranger. When I pick up my arrangements I always make a rehearsal recording which helps me to learn my words quickly. People who do amateur dramatics have no idea how privileged they are to have the amount of rehearsal time they do. For me it’s a case of picking up an arrangement, learning it on the way home and then often performing it the next day. 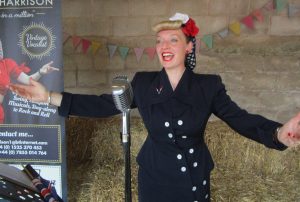 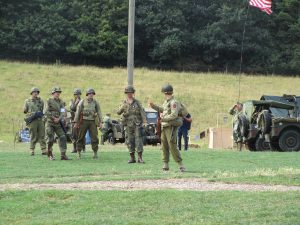 The Yanks are Coming!

During the course of a 1940s weekend I usually sing between 80 to 100 non-repetitive numbers. These normally brake down to 3 x 45 minute costume shows daily, plus 2 x 45/60 minute evening sets depending on the clients requirements. This year’s event at Stonehusrt Farm was special – on Saturday night Paul and I sang for the 75th VJ Dance which is the one time of day when re-enactors can let down their hair down, relax, leave their static displays and enjoy the entertainment.

A great deal of thought goes into my show plans and it’s important that by the evening I include plenty of swing tunes for people to dance too. During the day you can get all ages and this year my “Stage and Screen” shows went extremely well which add contrast to the classic Wartime singalong and American Swing. Paul always dazzles with his Sinatra-style vocals; the psychology of why certain songs work really interests me, as tastes and expectations change.

I began my professional singing carer in Blackpool back in 1992 and since then I’ve seen so many changes. I didn’t come to the 40s scene until 2002 when tastes in 1940s music was more about British singalong and Glen Miller. Today it’s nearly all American swing which is performed by female artists – unfortunately too many of them source their music from the internet which means they all sound alike.

It’s important to always have something new and I confess I didn’t expect my “Wizard of Oz” arrangement to go as well as it did. “Wizard of Oz”, was something of a curved ball as it skipped along, but maybe that’s why. Last weekend I had a Eureka moment when I realised that skipping tempos on the 1940s scene are untapped and come completely fresh. It’s interesting watching peoples reactions and musically I think I may have hit on something here. So watch this space!

In the meantime don’t forget to put next year’s date in your diary – Saturday 14th and Sunday 15th August 2021 as Stonehurst Farm’s 40s event continues to go from strength to strength. Paul, Poppy, the farm staff, all the re-enactors and myself look forward to welcoming you.

Tomorrow I’m taking my mother down to Bournemouth for a well deserved holiday and when I get back I’m continuing with my driveway concerts which will be keeping me busy right through the bank holiday weekend. Sadly I got the news today that “Proms in the Park” won’t be going ahead this year on the 12th September, which is such a shame as I had a fantastic concert planned. However I will be performing my Proms concert on the 5th September in Mentmore on the Village Green at 4pm, so don’t forget to bring your picnic!

That’s all my news for now and I shall leave you with a few photos from this weekend. Thank you for following. Toodle Pip and Bye for now! 😉 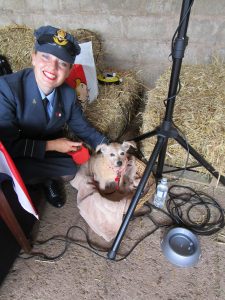