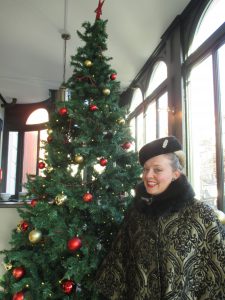 Merry Christmas at The Theater Royal!

Hello every-one it’s good to be back after a terrific Christmas season. May I start by wishing you all a Very Happy New Year and thank-you for all your kind wishes, cards, presents and support over the last year. I often wonder when I write my blogs if anyone actually reads them but it seems quite a lot of you do which is always nice to know!

I’ve decided to split my blog into two this time around and in my next installment I will be telling you more about my new year. I know I have fallen behind somewhat with my blog writing this Christmas as it’s been a busy season so I hope the wait will have been worth it as I have so much to tell you all.

If you caught my last blog you will know I’ve been down on the South Coast with Paul for Christmas and New Year and since returning I’ve been tied up with contracts and e-mails. I had over 100 e-mails which needed my attention when I returned. I’ve also been out performing New Year shows 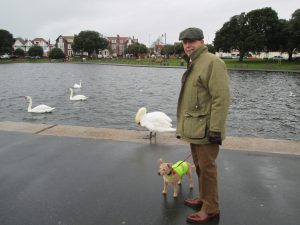 Paul with Poppy at The Canoe Lake!

this week which has made a refreshing change from Rocking Around the Christmas Tree. Certainly there seems to be more confidence in the air and my shows have been selling well for 2018. So far it’s been a bit of a mixed bag with regards bookings for this year with no strong trends leaping forward. Although I have a feeling September and November are going to be big sellers with the WW1 and Air Force centenaries.

I was very lucky this Christmas that I had a few days off between shows. Paul’s mother joined us for lunch on Christmas day and Poppy stayed 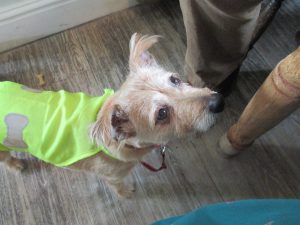 with us for the holidays as we took her for walks around the canoeing lake in Southsea despite the cold weather. There is a wonderful dog friendly cafe in Southsea called “Greens”. It’s a great spot to stop for lunch and they always have plenty of doggy biscuits on hand for our K9 friends although Poppy prefers to have human food than dog food.

While I was away Paul was able to get tickets for us to see “Beauty and the Beast” at The Theater Royal in Portsmouth. A wonderful theater built in the 1850s and full of character. It doesn’t seem 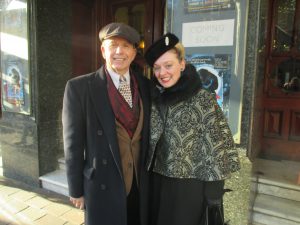 Paul and I at The Theater Royal!

all that long ago when I was treading the boards in Panto myself. One of my first professional jobs was the role of Cinderella at The Civic Theater in Rotherham, although in those days you would always have the principle boy played by a woman. They don’t do that now which I think is a real shame as it’s part of our British heritage and pantomime tradition. I always had a yearning to play principle boy but as I’m a soprano my voice was always too high for the role which meant casting directors would always give the part to a mezzo soprano. 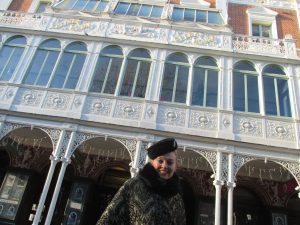 In this production of “Beauty and the Beast” we had a smarmy villain called Fredric, an officer in the Kings Navy who wanted to steal Beauty away from the Beast and marry her himself. A fairy god mother, a wicked witch plus a bear and a female impresario. I confess I lost the plot at one point but it all came together in the end and it was great to see a cast made up of people who could actually sing and dance. I think Fredric was my favorite character who was a bit of a cross between Adam Ant and Flash from Blackadder with a touch of Prince thrown in. He was an excellent dancer and his pirouettes were a delight 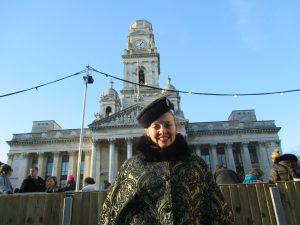 to watch which far out shone his singing ability which only added to the entertainment factor. Beauty had a beautiful singing voice  and the production was very well costumed.  A wonderful show packed full of great family entertainment!

The Theater Royal sits in the heart of Portsmouth not far from the Guild Hall which is built in the Italian style and looks very impressive. In the summer I think you could be mistaken for thinking yourself in Rome which is why it’s often used in films. I think Paul told me that they even made it look like a street in Imperial Russia for 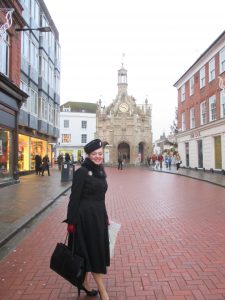 one film which with the right set dressing I could see working very well.

At this time of year it’s always good to have a little look at the sales although I have to confess there hasn’t been a great deal to catch my eye. To be honest I’ve never seen so many shops full of so much rubbish. Paul and I did have a day in Chichester and the only thing I could see worth buying was some fabric which was reduced in the sale. As for the clothes they all looked horrible and I’m glad I’m able to have a lot of my clothes made as i don’t like any of the designs on desplay. However I have to confess when I was in Southsea I did buy a pair of shoes in Knight and Lee which are very 1940s in style. As for everything else I just had to walk by.

I’m going to have to leave my blog here tonight as I still have some e-mail replies I must get away tonight. In my next blog I 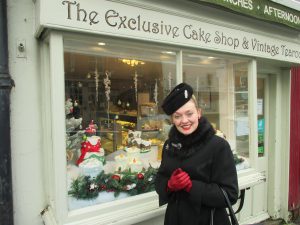 will be tell you about New Years Eve and our trip to Arundel. So Keep Watching and Toodle Pip for Now!