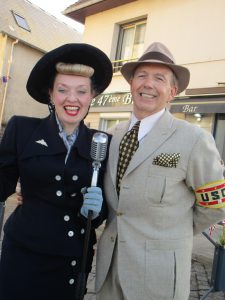 On Stage at Port en Bessin!

After the 7th June storm Paul and I were so relieved to see the sunshine return for the 8th. We had been engaged to perform Saturday night in the town of Port en Bessin for the 47 Royal Marine Commando dinner. It was their last night in town and the show had been opened up for the whole town to enjoy in Fountain Square which is right by the famous Commando Restaurant. We were so thrilled to see the Commando veterans who had had a busy day and were looking forward to their special evening with the Commando Association.

During the day Paul and I had had the pleasure  of meeting up with our friends Paul and Sally Chapman for lunch along with their friends Rolland and Brian. That night we had put together a special glamorous show of songs which covered British, American and French numbers the audience could sing along and dance to. After Fridays storms which meant all shows were cancelled along the Normandy coast we were so 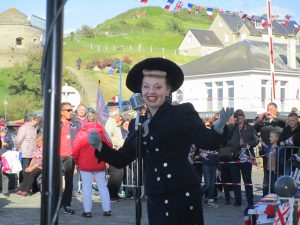 pleased to see the sun and we couldn’t have wished for better weather as people danced and sang along to our music.

A great deal of thought goes into what we wear and both Paul and I chose to wear glamorous suits from the 1940s. Each show requires a different look and like my music I don’t like to sing the same show plan, or be seen in the same out-fit twice when I’m on tour. My suit was a “Lilly Anne” which I had bought on line and was sent to me from Australia where Paul’s had been tailor made for him using original patterns from the 40s. It was essential we wore suits as both Paul and I had 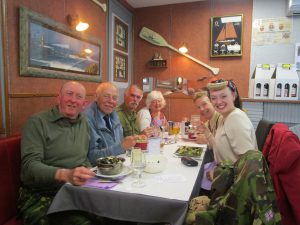 been invited to dinner afterwards with the Commando Association and we needed clothes which were both practical and glamorous for early evening.

A few days before I had been lucky enough to purchase an original 40s silk scarf in Bayeux and with my pale blue cotton gloves it finished my outfit off to perfection adding a subtle splash of colour. It’s important not to get cold when on stage or to underestimate how helpful a silk scarf can be. The weather can change very quickly in Normandy and last year I had a wool coat made from green baize. 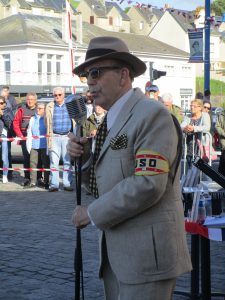 Paul Sings I’ll Be Seeing You!

Used in the covering of snooker tables, baize is high quality and extremely warm to wear. This year my coat came into it’s own. Based on Dior’s New look I had the coat lined through-out in green silk. The advantage of this is silk not only keeps me warm but cool when I’m performing. Also if it’s raining it doesn’t crease because the weight of the wool allows the creases to drop out. I wore this coat on the 7th pre-empting the bad weather but as the show was cancelled I decided to wear it again on the 9th when the weather change once more.

For the 9th June Paul and I had been booked to sing all day in Ste Marie du Mont. Our shows would begin at 12 noon and we would sing through to 6pm performing 20 minutes on 20 minutes off all through the day. This arrangement works well for Ste Marie du Mont as they have a 1940s encampment around the church where people often like to stop for refreshments before making their way onto Utah beach and 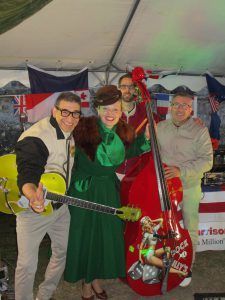 On Stage with Dock a Billy!

the museum. We were also booked to share the stage that night with rockabilly band “Dock a Billy” and to perform songs from the 1940s 50s, 60s and 70s. During the day my brief was to sing from the 1930s and 40s as Paul and I performed 9 sets. While we were there we had the pleasure of meeting up with American WW2 veterans and the US Army who had been taking part in the parades and the commemorative parachute drops.

Initially it had been my plan to wear my US WAC uniform but with the weather constantly changing I thought it best to wear my green coat. This turned out to be the right choice and also bridged the different musical decades especially when it came to the evening show. Paul and I were back on stage at 8pm as we sang two more 45 minute sets. We enjoyed performing with Dock a Billy very much who were a 3 piece and had a great 50s sound. Fortunately this year we had a marque 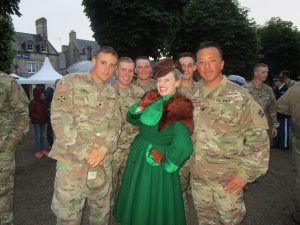 Meeting the US Military in Ste Marie du Mont!

covering the stage area as we played through to 11pm.

The following day we were booked to sailed home to Portsmouth which gave us time to reflect on what a wonderful experience and privilege it had been to have been  involved in D-Day’s 75th Commemoration. To have seen our veterans faces as young men adorning the lampposts was fabulous not to mention the ceremonies which were all extremely moving. This is a year I will never forget and it will be something I will always treasure! Thank-you to every-one who took part and to all the people who work so tirelessly 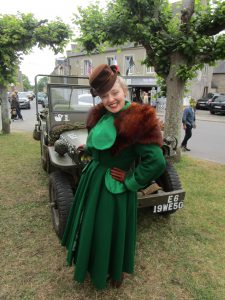 behind the scenes such as Adrian and Karen Cox, Steven Oldrid and Philippe Tanne.

Since I’ve been home it’s been business as usual as I’ve been out and about performing a verity of different shows which have included Prom concerts, “A Day at the Races” to tie in with Ascott week and the “Swinging 50s, 60s and 70s”. I’ve also been in the recording studio working with my musical arranger Richard on new music for my “Fairy Tale Christmas Spectacular” show which I will be launching later this year on the 28th November. I’m also expanding my 1970s repertoire and I have lots of new songs to learn for July. I shall also be starting work on editing my “My Fair Lady” showreel with film maker Judson on the 2nd so lots to look forward to

Next week Paul and I will be taking a holiday and I wont be back in the office again until the 1st July. We will be heading off to Totnes with little Poppy for a well deserved break and 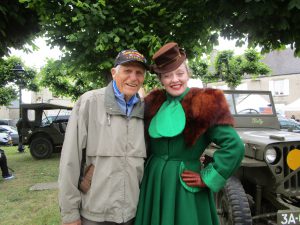 Meeting Up with US WW2 Veteran!

I look forward to catching up with you all when I get back.

In the meantime enjoy the photos and keep following. Toodle Pip and bye for now! 😉 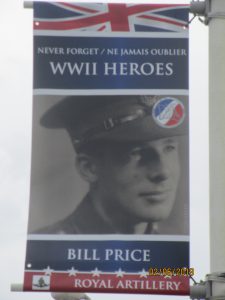