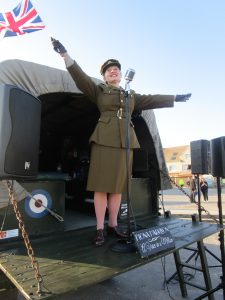 After a full day of shows at Pegasus Bridge. Paul and I were quick to pack up and dash back from Benouville to our B&B. After spending the 5th singing ENSA style off the back of Paul Chapman’s wonderful WW2 lorry and then a show in the evening entertaining at the veterans dinner, we were both keen to get a good nights sleep. We knew we wouldn’t have long as it was necessary for us to be dressed and back on the road for 5.15 am.

I know Arromanches and the gendarmes of old having first performed for the commemorations back in 2004. When it’s an important year and we have dignitaries, the security goes crazy and this year was no exception. It had been decided that Normandy would go into lock down and certain roads after 6am through to midnight would be closed for the 6th June thus enabling the dignitaries to move freely with-out hindrance. Great if you are a member of a the Royal family or a 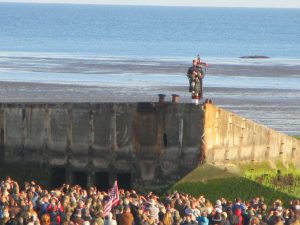 The Loan Piper in Arromanches!

political leader but a nightmare for every-one else!

Once the clock stuck 6am it was crucial that every-one was in place before the road blocks came into force. Paul and I had been booked to sing for the D-Day Breakfast in Arromanches from 7.45 am through to 9.15am which meant as soon as the morning piper on the Mulbery harbour had finished and the flag had been raised with the wreath laid we would start singing. 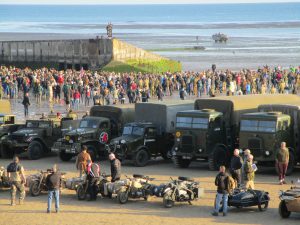 to Arromanches that night and camp over in their lorry so they would already be in place for the morning. The plan was for Paul Marsden and I to play out over Arromanches beach using the lorry as our stage while 250 military vehicles would be parked up on the sand. As you can imagine it was a momentous occasion and we all felt very proud to be marking this important moment in history. It’s one of those jobs I will remember to my dying day as I will be able to look back and say I was the singer who sang for the 75th D-Day Commemoration, Arromanches, 6th June 2019.

My brief was simple as I had been engaged to perform in ATS uniform and to sing mostly British songs from the period. As with all these things I always make sure I have all eventualities covered and choosing the right song to break from the ceremonial 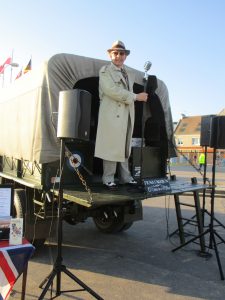 into the  joyous is very important. When I’m engaged to sing for these sorts of events the right choice is usually “Requiem for a Solider” especially as my arrangement opens up with a solo cornet playing the last post before the full orchestra strikes up. It’s a wonderful arrangement and very moving thanks to my musical arranger Richard Whennell who is a genius!

Feeling the mood, this proved to be the right choice as I then segued into my WW2 sing along medley and continued with a predominantly British selection of songs from the 1930s and 40s. I had been asked to avoid “Boogie Woogie Bugle Boy” and “Don’t Sit Under the Apple Tree” as these songs get over played but interestingly the songs which went down best of all that morning were from the Great War and included my WW1 military medley which received a wonderful round of applause. It’s important to stick to the brief but sometimes the moment 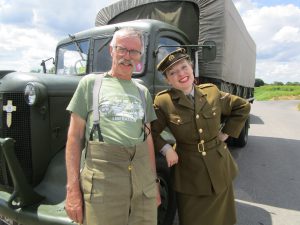 Catching Up With Paul After the Show!

requires something different and the few WW1 numbers I sang worked beautifully.

Paul sang popular numbers associated with Frank Sinatra which complimented splendidly and by 9.15 we had to strike everything down ready for the many ceremonies and bands which were due to play later that day. Of course the French want everything done quickly and they don’t always realise it takes time to pack away properly. For Arromanches I used a 4 speaker rig which gave me the extra push I needed to reach across the beach. It takes a little longer to strike down and in the end we left much of our rig in Paul’s lorry with 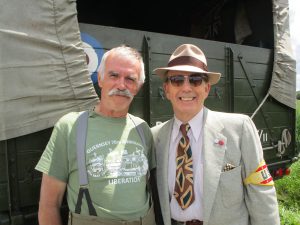 The Two Paul’s Together!

a view of parking up together at our friends house in Arromanches for a cup of tea and a croissant. Thus enabling us to pack away at leisure.

When it came to it we had a particularly unpleasant gendarme who wouldn’t let us pass. One of those types who causes problems where there aren’t any, which resulted in Paul and his lorry getting separated from us and some of the veterans cruelly stopped from travelling to where they needed to be. Needless to say this gendarme wasn’t popular and even his fellow gendarme’s found his behavior inappropriate!

While Paul and I were at Normandy Beach we 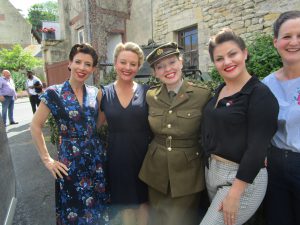 Meeting Up With The D-Day Darlings!

bumped into the “D-Day Darlings” who had come over with the Royal British Legion cruise ship. They had been booked to launch the opening of a special D-Day Garden and to my astonishment the D-Day Darlings had heard of me. I was really surprised as they are the famous ones not me. It was lovely to meet them as they went off to the garden opening.

Later that afternoon we were able to catch up with Paul and his lorry  in a lay by  and after a sit down and a cup of tea the world seemed a whole lot better. Paul and I decided to return to our B&B as we needed the rest. The 5th and 6th had been 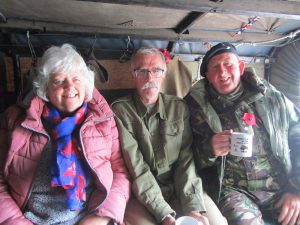 That All Important Cup Of Tea With Sally, Paul & Roland!

very intense and we wanted to get ready for our next days show which was due to take place at Pegasus Bridge.

Unlike the WAAF uniform show we had played on the 5th this time it would be a 1940s  glamour show. However come the 7th the weather changed and all the concerts along the Normandy cost had to be cancelled due to the heavy wind and rain. At the time Paul and I sat in the lorry at Pegasus Bridge with Paul, Sally and their friend Roland wondering if we were being defeatist. However the decision to cancel turned out to be the right one as it would have been dangerous to have continued in such dreadful conditions. 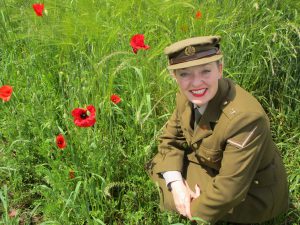 The Poppy Fields of Normandy!

Arromanches took the decision to strike down their stage completely as the storm increased. Instead we deiced to go for a Chinese meal in Bayeux as we made our way back to our B&B. Later that night we entertained the French Military Vehicle club who were staying at our B&B. I think we can say a jolly good time was had by all as Paul and I sang from the 1940s, 50,s 60s and 70s.

In part three I shall tell you about our shows in Port en Bessin and working with the Rockabilly band, Dock a Billy in Ste Marie du Mont. Keep Following and Toodle Pip! 😉