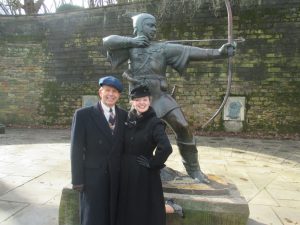 Paul and I with Robin Hood! 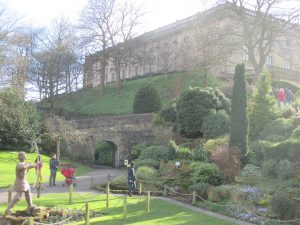 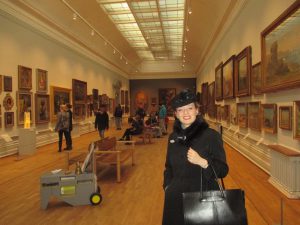 This weekend Paul and I were in Nottingham with out friends Brian and Viv as we had a day out at Nottingham Castle. For those of you who don’t know Nottingham castle isn’t like the castles you see in Hollywood Robin Hood movies but in fact a house which was built in 1678 on the sight of where the castle once stood. It now houses a Museum and Art Gallery which first opened back in 1878 and was the first municipal art museum in the country out-side of London.

As you might expect the sight has had a long history. William the Conqueror built the first Castle in 1067 which every school boy knows was the year after the Battle of Hastings. 1066 is a very good place to start when remembering British history and certainly a date I will never forget which was taught to me at the age of six during my very first history lesson.

In 1150-1189 Henry II rebuilt part of the castle in stone and in 1194 it was besieged by Richard the Lionheart which I guess ties in loosely with the romantic Robin Hood stories around this time. In 1331 Roger Mortimer was dragged out of the castle and faced trial for the murder of Edward II. King David II of Scotland was held prisoner in Nottingham castle and in 1485 Richard III set off to Bosworth from Nottingham where he latter died in battle. Charles I raised his standard at the start of the Civil War there in 1642 and with the Kings defeat the remains of the castle were demolished in 1651. A new palace was built on the sight by the first Duke of Newcastle in 1678 and much of this building is what you see today, despite burning down in the Reform Act Riots of 1831 it re-opened in 1878 as a museum and art gallery. 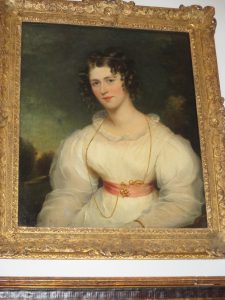 The museum has a collection of all sorts from fine paintings, Medieval Alabaster to Textiles from around the world. My favorite portrait was of Miss Elizabeth Hoare painted by Thomas Barber in 1826 and reminded me of the actress Jennifer Ehle who played Lizzy in the BBCs 1995 adaptation of Pride and Prejudice. I particularly enjoyed looking at the historical fashion and especially a Chinese tippet which caught my eye for it’s beautiful workmanship.

Of course no trip to Nottingham would be complete with-out a photo opportunity with Robin Hood as we all stood by the famous statue. Although this was my first visit to Nottingham I hope Paul and I will get the chance to visit again so we can see Sherwood Forest. So thank-you Brian and Viv for inviting us. It was very kind of you to take the time to show us around your city and to introduce us to Robin Hood. 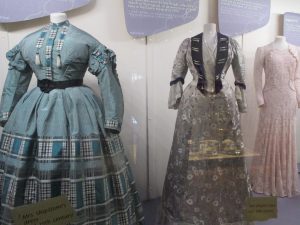 I don’t know what I was expecting but I’m afraid Robin’s statue doesn’t look a bit like Errol Flinn – shame!

Paul and I drove back on Sunday and now it’s full steam ahead in the office as I plough on with paper work and start on the Spring season. I have some new songs to learn and meetings this week which I must get ready for so not to mention I will be back filming on Monday. So much to do. I shall leave my blog here this afternoon but don’t forget to Keep Watching. 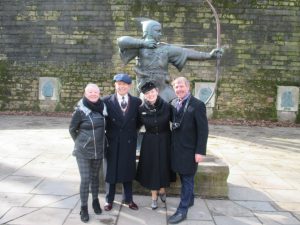 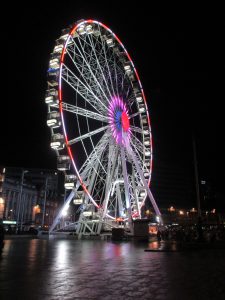 Nottingham Lit Up at Night! 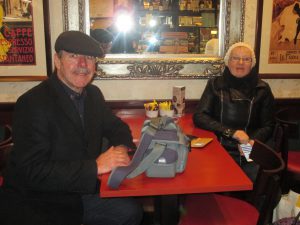 Out for Coffee with Brian and Viv!