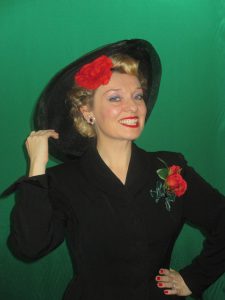 Snap Shot of Me in My Loretta Out-Fit! 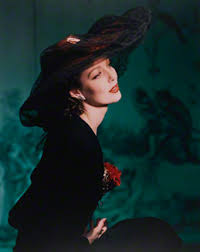 I’m afraid I can’t spend too long on my blog tonight as I’m off first thing tomorrow morning to Nottingham for the weekend. Paul and I have been invited by our friends Brain and Viv to visit the castle and as I’ve never been to Nottingham before so Paul and I thought we would make a weekend of it. We had planned to go to York but what with one thing and another we weren’t able to get the dates to click together. So in the end we decided just to do Nottingham this time around and leave York for 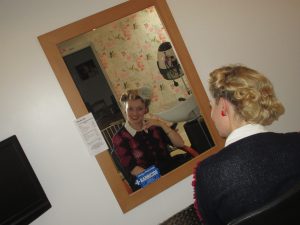 A Kim of Quainton Hair Do!

another occasion. Unfortunately I’ve just seen the weather forecast so it looks like it might be a case of wearing macs with umbrellas!

ut very well. One of the members took a few on my little camera and as a starting point we took inspiration from a photograph I saw in a book of Loretta Young. Interestingly rather than look like Loretta Young I think I look more like 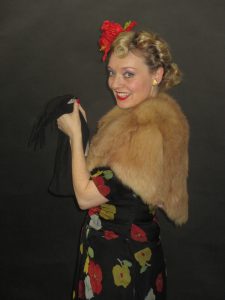 Eva Paron and my friend Kim was able to wiz together a suitable hair style which went with the dresses I brought along.

For the Loretta Young inspired shots I wore a black 1940s suit with red roses and we used a green background. The wonderful thing about the green background it highlighted the detail in the black suit where a white background would have just over powered the black.  As one starts to model

and move accordingly we found a praying shot worked really well which made me think of Catholic Church and Eva Paron. I’m looking forward to seeing all the photos as different photographers see different things and it’s amazing the verity which can be gained from one set up. 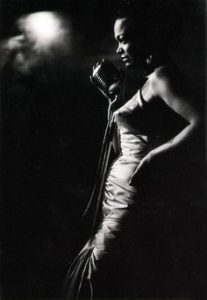 Another inspiration was a photo of Eartha Kitt and in order to recreate the look Paul lent me his 1950s microphone which is just that little bit bigger and smarter than mine. What can I say my microphone gets a lot of use and maybe I should think about replacing it along with my mic stand which is covered in battle scars! I also brought along two 1940s evening gowns one floral and one in a mint green which had lots of folds in the fabric. I have a feeling the mint green dress will work well in black and white as it has a black sequin trim. We also did a few glamour shots as I always like to bring along more accessories than I need which gives one a chance to improvise and go with the flow.

Apart from modeling I’ve been working very hard in the office to get all my contracts out this week. I still have a few more to do when I get back from Nottingham and a loose end 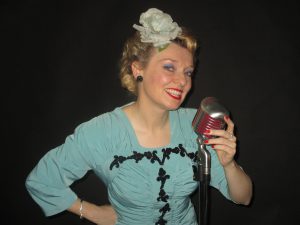 A Snap Shot Between Shots!

or two which still needs to be tied. It’s that time of year again when I need to get all my equipment PATS tested before the start of the season so fingers crossed I can get that done next week before I head back to the Limelight theater and start filming again.

That’s all my news for now. Keep Watching and Toodle Pip! 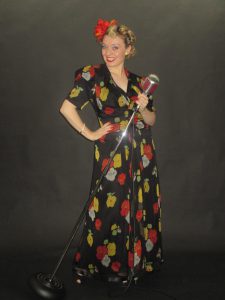