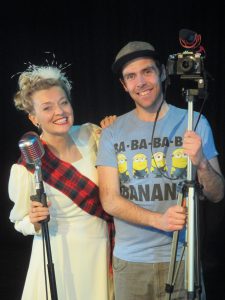 On Set with David!

Since returning home from Nottingham on Sunday I’ve been extremely busy in the office this week. So as you might expect I was pleased to have a change of surroundings today and to be working in Aylesbury at The Limelight Theater with David filming The Flower Duet from Lakme’.  If you have been following me you will know I’ve been planning this film shoot for ages and it’s great when a plan comes together.

My day started bright and early as I was in the hair dressers with Kim first thing this morning as my hair needed to be set in rollers before it could be dressed out and worn long. Kim often works with me as my sound engineer so it was great to be working with her again today employing both her skills not only as a sound engineer but as a hair dresser too. 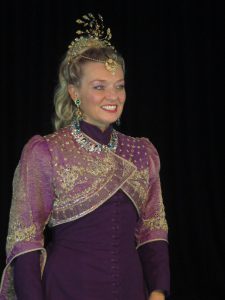 In Costume for Lakme’

As with anything I do, a great deal of thought goes into the planning of it. For many years I had wanted to leave a video record of me singing the Flower Duet and I had had lots of ideas about how I wanted to stage and costume the aria. Although written in French by Delibes the Opera is set in India at the time of the Rarge so I wanted a look which would suit the date of 1883. Then one day all my ideas fell into place when I re-watched the 2001 film Moulin Rouge. Nicole Kidman’s Hindirehearsai  dress really inspired me as I wanted a dress which would tick both the Victorian and Indian box – and hay presto there it was!

My next job was to find an Indian beaded fabric which would make up the bolero designs I had sketched. Sometimes fate has a habit of stepping in and by chance I came across a purple Indian dress in a charity shop. 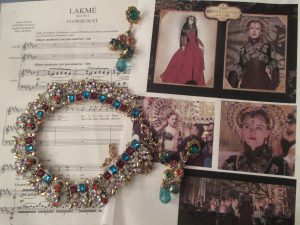 Nicole’s Hindirehearsai Dress and my Jewelry!

Immediately I saw it’s potential and by cleverly re-cutting the skirt panels I knew two new boleros could be made from the dress. Of-course when it comes to making dresses this is all down to the cleaver skill of my dress maker Judi who did me proud to-day. Sewing  fabrics which are already heavily hand beaded isn’t easy and Judi told me she went through 5 needles in the making of it. So well done Judi and thank-you for your skill!

Today I filmed and sung both parts Lakme’ and Mallika to split screen. As I was playing both parts I had two boleros made which went over the same dress which I accessorized with 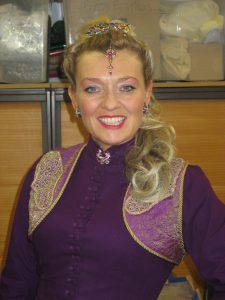 Backstage in My Mallika Costume!

an array of different jewelry. Much of this jewelry I have had for years thinking at the time of buying I’m sure this will come in useful for something and to-day was that day. My big Indian earrings I bought in Richards sale back in 1989. I’ve always loved them and I’ve been waiting for 28 years to find the right outfit for them to go with. The necklace I bought in John Lewis’s sale this year after Christmas and what a splendid set they’ve made.

After putting so much work into the costuming I’m pleased to say the filming went really well to-day. I’ve been rehearsing for weeks going over Mallika’s part which I never sing live. In performance I always take the top part of Lakme’ which I know really well. I recorded Mallika’s part onto my backing track back in 2001 so it’s been good for me to go over it again and refresh my memory. 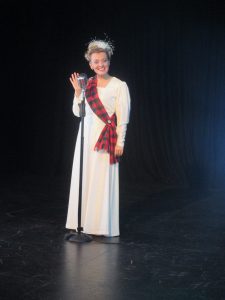 Apart from going Indian and singing Lakme’ I was also able to record the Scottish favorite Loch Lomand today too. So you could say it’s been a really international day what with one thing and another. Loch Lomand is from my back catalog when I performed the song in my Wrens theater show How HOVIS Won the War, but that’s another story.  I will be working with David again on Thursday this week when we start work on the edits which is all very exciting.

I shall leave it here tonight as I have a show in Peterborough tomorrow, Harlow on Wednesday and on Friday I will be performing at The Waterside theater in Aylesbury as part of Buckinghamshires launch for Armed Forces Day. More on that in my next blog. If you would like to see more photos from today’s shoot please click onto my facebook page where you can also see some behind the scenes footage taken on Kim’s phone of me singing Lakme’.