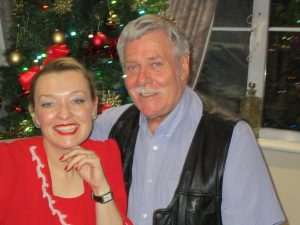 Dressed for Christmas with my friend Joe!

Hello every-one and yes “It’s beginning to look a lot like Christmas” to quote my second song in for this season. I confess I don’t really have much to write about this week other than I’ve been working mostly two shows daily and busy bedding in my new show “A Fairytale Christmas Spectacular”. I confess I haven’t taken many photos these last few days as I’ve had some tight turn around’s dashing from venue to venue. Already I’ve been to Oxford, Peterborough, Milton Keynes and Sandy. I always enjoy this time of year as it’s exciting going from show to show and adapting content to suit each audience. 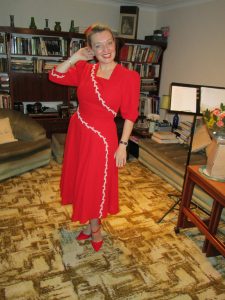 Trying On My New Red Dress!

Certainly in these last few days I’ve had quite a few Christmas parties to do and all with slightly different briefs.

It can take a few performances to get a new show to sit right but this year everything has gone really well and the new fairytale arrangements have been going down a treat. The rehearsal time I spent has really paid off and if anything I have more fairytale repertoire than I need which is already paving it’s way to another show. Large repertoires allow me to be more creative and work in musical variations depending on whom I am singing to.

I’ve also had the pleasure of wearing my new dresses which I had adapted for this season. I had my last fitting on Saturday and now it’s full steam ahead. A lot of though goes into my dresses  and they have to be hard wearing, not crease and with stand a lot of wear and tear. So often I don’t have time to 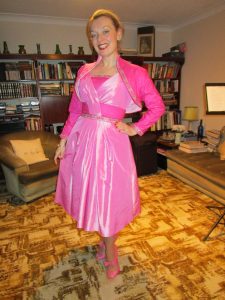 change and more often than not I have to turn up at venues already dressed, rig and then it’s straight on stage.

My red dress for this season is made from best quality crepe fabric. It moves beautifully and by adding the white peal trimming it’s given the dress a new lease of life. It’s also wonderfully comfortable to wear. As for my pink cocktail dress that was. I’ve added a new bolero and had both the dress and bolero re-trimmed using trimmings I bought in Fulham at Accessories of Old Vintage. It’s completely revitalised and fits my fairy tail theme perfectly for this year

Other news and for those of you who follow me on Facebook I expect many of you have already seen, but I have had some new banners designed for my Facebook pages. I thought we were long over due for a change and these designs are all down to my new web-designer Karen Hardicker and photographer Angela Adams as we press forward into 2020.