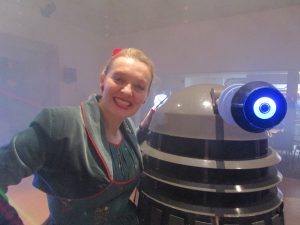 Meeting Up with a Dalek!

This last week has been very much business as usual as I’ve been traveling from show to show. Although on paper I’ve been performing the same show ” A Fairy Tale Christmas Spectacular”, in reality I’ve been adding in variations depending on my audience and no two shows so far have been alike. Some audiences like to sit back and listen where others just want to get down and party. I’ve had plenty of both and I’ve enjoyed working in the musical differences. Fortunately I’m not short of repertoire and I’ve something to suit all tastes from Disney, Sing-along, Christmas Carols to Rock and Roll. 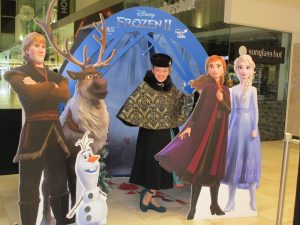 Going Disney with the Cast from Frozen!

“A Fairy Tale Christmas Spectacular” is a new show for this season and Richard’s musical arrangements have been going down extremely well, especially his “Oliver”medley. I’ve seem to have hit upon a gem there as it never fails and my new Mary Poppins arrangement of “Feed the Birds” is also proving to be a great success with audiences.

Interestingly I’ve added in the monkey song from The Jungle Book  “King of the Swingers”or in my case “Queen of the Swingers”. I commissioned  this arrangement a few years ago for a special event and included “Abba Dabba Do – Said the 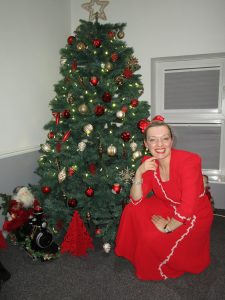 Monkey to the Chimp” in the medley. Afterwards I was never able to find a proper place for it in my other shows until now. It’s great to bring it out from my back catalog and perform the number again especially as it opens up with Tarzan’s famous jungle call.

Disney never ceases to be popular and while I was shopping in Milton Keynes I caught up with the cast from Frozen. I’m currently working on “Let it Go” which I’m adding into some of my January shows.

I’m always working, and having a new repertoire this season has enabled me to think more about my singing technique. Sometimes it’s easier to start from scratch with new songs and as I’ve introduced a lot of modern Disney numbers it’s enabled me to re-think. I’ve had something of a break through with regards the taming of my vibrato which is all down to how I think about sustaining the note. Everything is in the right 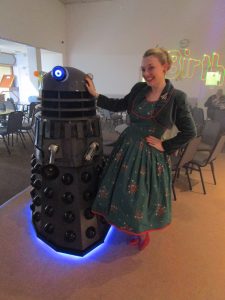 My Friend the Dalek!

place, it’s just a case of mind over matter and working to improve.

On Sunday night I had the pleasure of performing for a 50th Birthday party in my home town of Leighton Buzzard which included a special guest appearance from a Dalek no less! I’ve also been to Peterborough and later on this week I’m back in Milton Keynes and over to Cambridgeshire. On Monday I caught up with all my friends from L&D radio in Hitchin and on Saturday I’m performing in Much Hadnam.