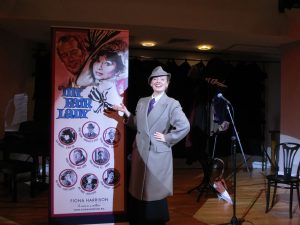 Why Can’t The English Teach Their Children How to Speak!

It’s been a very exciting week with a couple of “My Fair Lady” shows back to back. If you caught my last blog you will know I was down in Mill Hill performing at the synagogue on Wednesday and then I was straight up to Birmingham with the show the following day. I was booked to play at Bournville Gardens Village and my show couldn’t have gone better as they have a small theater with stage lighting, which makes for the perfect setting. 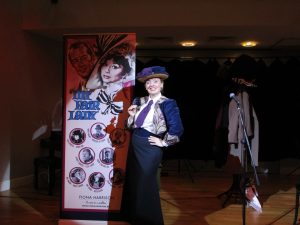 On Stage at Bournville Gardens Village!

tube and added to my web-site. My promo has been a long time in it’s creation but it was worth the wait. I’m really proud of it and I’m glad we weren’t tempted to cut corners compromising the finished result.

Judson and I took a long time on getting the opening graphics just right emulating many of the ideas used in the original “My Fair Lady” film. The flower shots were taken in the public gardens while Judson was working out in Vienna. These shots look like they have been shot in technicolor really giving the promo that glamorous Hollywood edge. 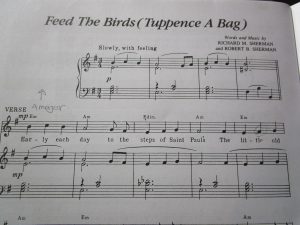 Feed the Birds from Mary Poppins!

I enclose the You Tube link and I hope you all enjoy watching it as much as I did making it. https://youtu.be/k5Od4Ju95Lc

This week it’s all change and tomorrow I open with my new “Fairy Tale Christmas Spectacular” show. I’ve been rehearsing and yesterday evening I was in the recording studio with Richard picking up the last of my musical arrangements before Christmas. There is nothing more exciting than a new musical arrangement and this year I’ve been investing heavily in music for the show. You could say tomorrow is going to be D-Day when 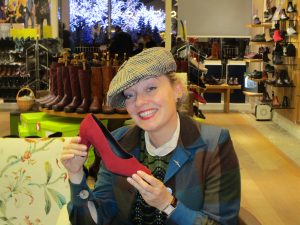 Shopping for Red Shoes at Hotters!

everything will be coming together and I’m just praying I will remember all my words.

Once again Richard has surpassed himself and this Christmas I am introducing lots of new Disney number plus Richard has put together a wonderful Disney medley which I tried out for the first time earlier this month when I was singing for the Poppy Appeal in Birmingham. I also have a new Oliver arrangement which went down well in the Summer when I tried it out for the first time and yesterday I picked up “Feed the Birds” from Mary Poppins. I have other arrangements in production with Richard for next year as I’m 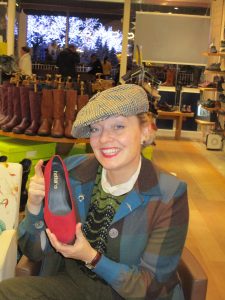 Finding a pair in Cherry Red at Hotters!

A great deal of thought goes into my dresses and better still I was able to have a few of my existing dresses re-modelled for this season. Some of you may remember when I went down to Fulham in September and bought a number of glamorous trimmings from “Accessories of Old Vintage”. Well those trimming are really coming into there own now and have made such a difference to my Christmas dresses.

Shoes are also a very important part, and when it comes to red I have three red dresses all needing a different shade. Last Saturday I ventured into Milton Keynes on a mission to find red shoes and sure enough I was able to come away with three different pairs. My first pair were bright red and came from New Look. The dark Ox blood ones came from , House of Fraser and for the Cherry Red ones I went to Hotters.   So I now have everything covered.

That’s all my news for now, keep Following and Toodle Pip! 😉