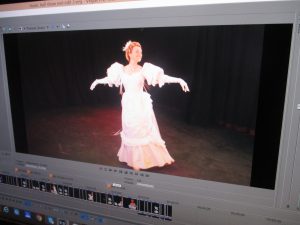 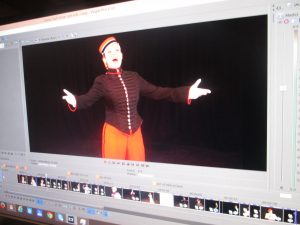 It’s been a very busy week what with one thing and another. On Monday I started work with David editing my latest Operatic Music Hall show reel. It’s always a bit nail biting seeing the footage for the first time as I worry so much about colouring and the costumes against the black back drop but I’m pleased to say all is good and the footage has come out really well. It’s difficult to know what to use and what to leave out when editing but I think this will be my best showreel to date and I’m very pleased with the way it’s been coming along. In particular I had concerns about my “Good Bye Dolly Gray” costume as it involved a black military tunic with black frogging and I was worried it might not show to best advantage against the black back drop but all is well. So keep watching this space and I hope it wont be too long before I have another great showreel to share with you all.

I will be back before the film cameras again on the 13th March when I start filming the “The Flower duet from Lakme'” to split screen. So as you can imagine I’m working hard on my French as I will be singing both parts Lakme and Mallika in a new Victorian Indian style 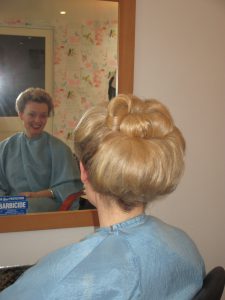 A Kim Edwardian Up Do!

costume which is my own design – but more on that later!

If you caught my last blog you would have read I have been having trouble with my Facebook pages which were shut down for four days last week. At first my web-designer and I thought it might have been down to a hacker but after a bit of digging it turns out that Facebook doesn’t like you sharing posts from one page to another. I have two facebook pages my personal and professional page which is Fiona Harrison A Voice in a Million. I would often share my posts and information for no other reason than it saved me time in the office. Once upon a time this was fine but I’m afraid Facebook doesn’t like pages to run parallel with each other which means I now have to work even harder on my social media to keep you all up to date. This isn’t good news for me as I really work very hard as it is and just to give you an idea it often takes me three hours to write one blog entry due to my dyslexia. In 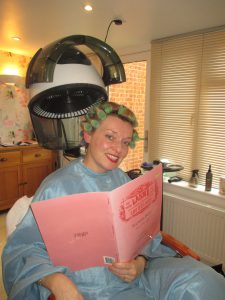 Under the Dryer as I Go Over My Words for Lakme’!

future I will be posting “Out-fit of the Week” and “Video of the Week” on my Voice in a Million page only which you can follow by clicking the Facebook star on the top of my web-site.

On Tuesday I was invited to do some modeling for a photographic club with my friend Lynda in Winchmore Hill. I also have another modeling assignment this Tuesday for a photographic club and both have required completely different looks. Last Tuesday I created an Edwardian look and wore a few of my Victorian/ Edwardian dresses where this Tuesday is going to be a 1940s shoot. I have a couple of new dresses I’m keen to have photographed so I will be back in the hairdressers having my hair done for Tuesday’s shoot. Last week my friend Kim was able to produce a wonderful Kitty Selfridge or cottage loaf style for me which I just loved where this week we shall be going for an Eva Paron! 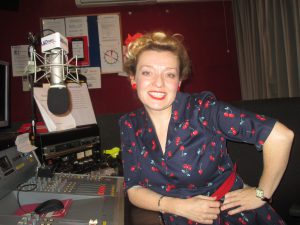 On Friday I was back on the radio with Alan Pagrams show at L&D Radio. It’s always good to catch up with Alan as we’ve made it a yearly thing and we always have so much to talk about. I first met Alan five years ago when I was performing in the Isle of Wight for the Steam railway’s Victorian weekend. This year I shall be singing in the Isle of Man for the Islands 1940s weekend which I am looking forward to very much. I’ve never been to the Isle of Man before and it’s one British Island I’ve not performed on when I’ve sung and toured with my theater shows  in the Channel Islands of Jersey and Guernsey and the Outer Hebrides 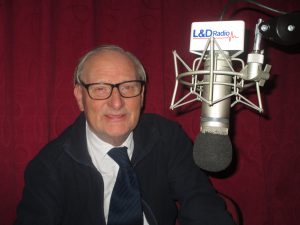 of Orkney and Shetland. So it will be good to go somewhere fresh and new.

On Saturday I was performing for the WI in Shefford and now I have a week of catching up with paperwork. Next weekend Paul and I will be in Nottingham another place I’ve not been to before and then it’s full steam head with Lakme’.

I shall leave it here tonight as I need to get to bed. Keep Watching and Toodle Pip! 😉