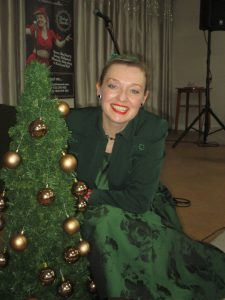 All Set to Go On Stage at Brooklands Club!

As you can imagine I’ve been working flat out this season with my Christmas shows and last week I had lots of variations on the Christmas theme for various clients. Some requesting the Christmas show to include Opera,  some with more of a Musical Theater flavor where others just wanted good old fashioned Rock and Roll. It’s important I stay on my game and I remember who wants which show and where. I also cut back a little on my exercise programs in December just to maintain my energy levels and to keep my shows fresh so I don’t tire with my work load.

I’ve been pacing myself and tomorrow I’m off to Peterborough and then I’m in High Wycombe on Thursday. On Christmas Eve I will be heading down to Porchester after my show as I have a few shows around the Portsmouth area and for New years Eve Paul and I will be at the Hilton for a well deserved night off. It will make a change for us to be entertained rather than the ones doing the entertaining. I can’t wait and that reminds me I must sort out a suitable evening dress to wear for the 31st! 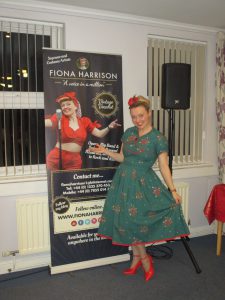 Stepping Out In My Christmas Red Shoes!

On Sunday I caught The Royal Variety performance and it was great to see a feature on Brinsworth House. Interestingly I’m booked to perform there next March. I shall be working with my friend Lynda Styan as we’ve been engaged as a double act. It was good to catch the show and two acts to my mind stood head and shoulders above all the others, firstly “The lost Voice Guy”. He was so funny and the concept of having a disabled man with no voice who talked through a machine not only presented a very positive image but it just goes to show dreams really can come true, especially as he was the winner of Britain’s Got Talent. I hope we get to see much more of this guy as I found his act really refreshing and very funny. So unlike anything else we have seen on TV.

The other act which just took my breath away was the incredibly talented Adrienne Warren who is currently playing Tina Turna in the West End. Her vocal ability was just astonishing, defying all the vocal rules of what is physically possible. How she is able to maintain that incredible sound for eight performances a week I will never know but her Royal Variety performance was sensational and a truly phenomenal.

I know I have been putting it off rather but before too long I really must start recording some of my 1970s numbers for film. I’m still thinking a lot about which songs to sing and how I want to present myself costume wise. Perhaps I need to invest in a psychedelic suit a little like the one Adrienne Warren wore when she is playing  70s Tina Turner. I in compassion have just released a new 1920s video of “If I had a Talking Picture of You” which after talking about Adrienne Warren and her performance of River Deep Mountain High seems a bit tame.

I’m going to have to dash now as I must get to bed. Enjoy the link!