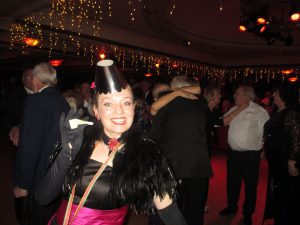 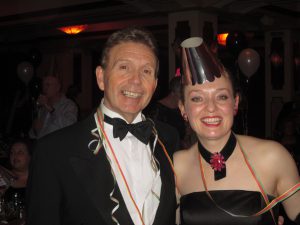 Paul and I at The Pavilion Bournemouth! 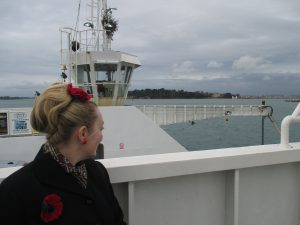 Over to Swanage For New Years Day!

It’s here 2017 and a Happy New Year to you all! I’m sorry I’ve not blogged these last few weeks but if you have been following me on facebook you will know I’ve not stopped. I gave 36 performances in December alone and performed a total of 267 shows in 2016. So as you might imagine I’m looking forward to having a little bit of a rest from the norm when I go away for my accounts weekend later this month. But before I do that I’d like to wish you all a very happy new year and thank all my customers who engaged me to perform at their events in 2016 a wonderful 2017!

Since returning home from celebrating the New Year with Paul in Bournemouth I’ve had a mountain of paperwork to get through. I’ve already sold 70 shows for 2017 so if you are still one of those people waiting for your contracts don’t worry I’m on the case. I should get my contracts to you in this next coming week as I work my way through your e-mails and messages.

I got back home on the 2nd but I was straight into the recording studio on the Tuesday in preparation for my next film shoot which I have all lined up for the end of this month and the beginning of February. In hind sight I’m not sure how wise it was to be recording so soon after a busy Christmas season, but as with all these things it’s fitting everything in in the time, and grabbing people when they are available. If I’m honest listening to my voice on play back it seems a little tired and in an ideal world I could have done with a rest before recording. For my next shoot I’m concentrating on Opera to Music Hall, music from the 1880s – 1920s which is involving lots of wonderful costumes. I’ve decided to leave the filming of The Flower duet from Lakme until a little later as it will be to split screen as I

Out and About in Swanage!

sing both parts to camera. It had been my intention to included it while filming the Music Hall songs but it’s going to require more work to get it just right and for me to get back up to speed with the French on the alto part when I’m so use to singing the soprano part.

Talking of filming I hope it wont be too much longer before I will be able to share with you three new videos. I signed off today on my “Burlington Bertie” and “Evette the Spivette” showreels. We still have a little more work to do on my 1940s & 50s showreel but we are very nearly there. We had a few lighting issues with Bertie and Evette due to the fact I’m wearing black and working against a black backdrop. We’ve had to lighten the films and in long short all is well but when we go to close up my body shape was getting lost due to the fact we were missing a very important over head light. Of course much depends on your computer screen but we have done the best we can 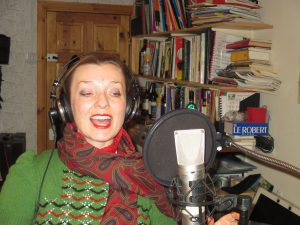 Back in the Recording Studio!

with the light we had on the day so I think all will be well in the end.

This new year was something of a treat as I wasn’t working. Instead Paul and I enjoyed the Dinner Dance at the Pavilion Ballroom in Bournemouth while spending a couple of nights in town at The Best Western Hotel. On new years day we made it over to Swanage on the chain ferry which has been one of those things we have been meaning to do for ages. Sadly the day turned a little wet and wind swept but then what do you expect for January!

It’s now time for me to sail into 2017 and look forward to a great year. I think 17 is going to be an interesting one with lots of changes. I’ve already been investing in new music and moving things on into the early 70s musically which will be fun. I haven’t as yet invested into a sequined boob tube and glitter boots but anythings possible.