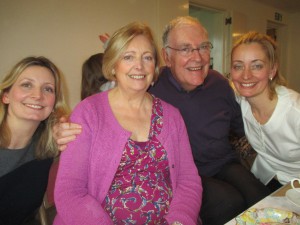 This Sunday I had the pleasure of singing for a very special 90th Birthday in Aspley Guise. For those of you who are in the know Aspley Guise is a charming Bedfordshire village which sits next door to Woburn Sands. Some of you may remember I shot my WW1 show reel there and the songs “Bye Bye Black Bird” and “The Sound of Music” all in the village. On this occasion I had been invited by my dear friend Joanne Cook to sing for her Anties 90th Birthday party which was held at The Link Room just behind St Botolphs Church. 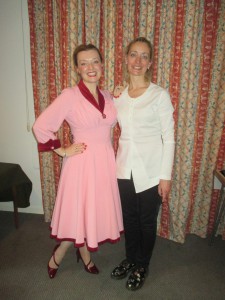 Joanne and I go back a long way. We first met when we were 10. Jo was modeling in a fashion show and I had been engaged by my dancing school to perform a Ballet routine. We hit it off straight away and became pen pals as we were both keen dancers. Although we went to different dancing schools our lives followed very similar paths. Jo is 2 months

older than me and as her birthday falls in August where mine is in October she was always a year ahead of me at school. We meet up again at our Upper school The Cedars and we both use to dance in the school shows as our games teacher Miss Stocking was really into dance. Our school would put on An Evening of Movement every year and Jo and I would often dance solos in the show. Happy days! 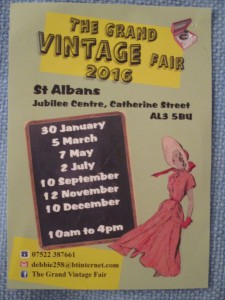 See You There on the 5th March!

Oddly enough I bumped into Miss Stocking by chance when I was performing at Sheringham’s 1940s weekend a few years ago. I would have loved to have stopped and chatted but I was just about to go on stage and when I’d turned around she had disappeared into the crowd. Which was a shame. As for Jo she always wanted to be a professional dancer and she was able to achieve just that. Jo now lives out in Italy and runs her own dancing school so it was a real treat to catch up with the family this weekend, Anne her mother Jo and her sister Justine at Phillis’ 90th.

With it being such a special occasion I put together a hand-picked program of songs for Phillis which spanned the decades from the 1940s to the Swinging 60s which went down really well with the audience, especially my Hands knees and Bomps a Daisy – that number never fails as I drafted in a few male volunteers!

This Saturday I will be singing at The Grand Vintage Fair at The Jubilee Centre, Catherine Street, St Albans. I will be on stage from 10.30pm – 3.30pm singing 20 minutes on and 20 minutes off all through the day so I hope you can all make it along. Don’t forget I will be singing with Paul Marsden for Oxjam  on the 8th March at All Saints Church in Leighton Buzzard. I will fill you in with more details on that in my next blog.