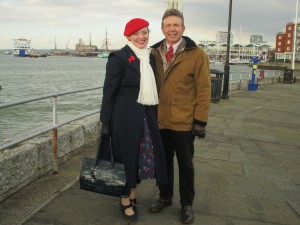 Paul and I in Old Portsmouth!

Hello every-one as you can see I’m back from a few days away in Portsmouth and I’m looking forward to a busy March. It’s been good to have a short break away with Paul. Connie enjoyed her run down although it would appear this diagnostic problem is a common fault with the Ford Connect Van. After having her throughly checked over by the “trusted mechanic” the light re-appeared on for the journey home as I exclaimed Oh no or words to that effect! I did as suggested and accelerated hard through the gears which has now allowed Wynns extreme Diesel System cleaner to work it’s magic. The yellow light has 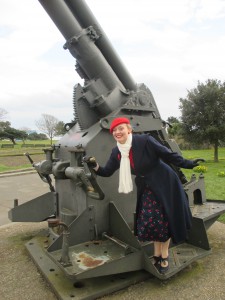 Outside the D-Day Museum!

now gone off and it might be a case of using Shell rather than Tesco’s for fuel in future. I always though fuel or Diesel was Diesel but apparently not! It’s something I will have to keep an eye on and maybe just like me Connie favours the better things in life. I will keep you posted

This week Paul and I visited Chichester and the old town of Portsmouth. Chichester has some great shops although I have to say the fashion world is floundering some what. I couldn’t see one thing I wanted to buy although Paul and I always like to have a rummage for vintage at The One Legged Jockey. I’m now starting to know this area very well as it wont be long before we head over to Normandy for the D-Day commemorations in June. We are still putting together the final program and I will have more on that for you later. However in the mean time Paul and I enjoyed lunch at The Spice Island Inn on Wednesday as we watched the Isle of Wight ferries pull in and out of the harbor. That’s another place we will be playing later on this August. On the way home we stopped off at the D-Day museum in Portsmouth. Sadly we were too late to go in on this occasion but I hope when I am next down I will have the chance to visit in-between taking Poppy for walks. 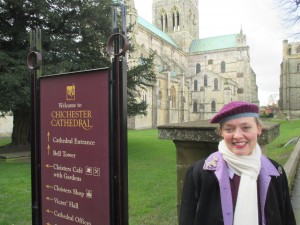 Out and About in Chichester!

This week I shall be working with David to finish off my 1950s and 60s show reel and I also have some time set aside to go over some new music with my friend Ross. Ross is a great pianist who I’ve had the pleasure of working with on many occasions. As I’m sure most of you know I commission my music but before I do so I take it to Ross first and note bash it through. When I look at a song I go over everything especially the verses. Sometimes you can find a forgotten gem which deserves to be included in the arrangement and sometimes after a play through you can understand why some verses don’t get sung at 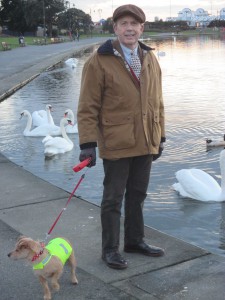 all. This time is invaluable as it enables me to make informed desions about which tunes I want to include before putting them into production. I have much I wish to do this year!

Speaking of which we are still having a few problems with some of the plug-ins on my web-site. The new up dates are proving to be more complicated than we first hoped, but don’t worry Rachel is on the case. Why is nothing ever straight forward! It seems the modern world is getting more and more complicated with every day.

That’s my news for now! Keep Watching and Toodle pip!