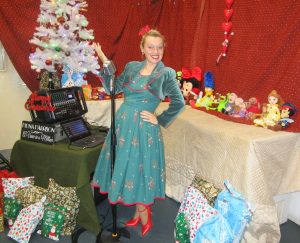 On Set to Film with The Leighton Buzzard Helpers! 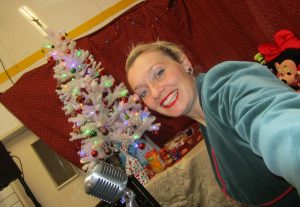 It’s Beginning to Look at Lot Like Christmas at The Depot!

You could say it’s beginning to look a lot like Christmas as we all look for positive ways to get through this second lock-down. Perhaps it’s not that surprising that more and more people are choosing to put up their Christmas decorations early in an attempt to lift spirits. I too have been rehearsing my Christmas repertoire and last Saturday I was invited by the Leighton Linslade Helpers to film some songs at their depot to tie in with the turning on of the Leighton Buzzard Christmas lights, which this year is going virtual.

One thing I can do is entertain people so when Sarah Cursons approached me on Facebook to sing from the Leighton Linslade Helpers depot I was delighted to help. When I arrived on Saturday all the helpers had worked extremely hard to decorated the depot and I recorded a selection of songs. These included, Rocking Around the Christmas Tree, Santa Baby, Mistletoe and Wine, 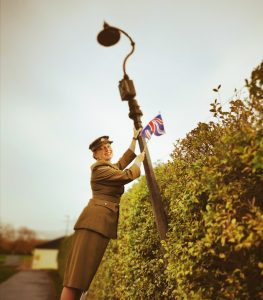 Charlotte’s Shot of Barty and I!

A Winter Wonderland, Silent Night, A Christmas Carol Sing-along Medley, Have Yourself a Merry Little Christmas, White Christmas and of course not forgetting It’s Beginning to look alot like Christmas which I also streamed live on Facebook. 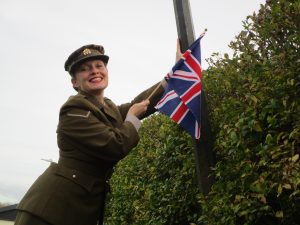 Getting The Barty Shot!

This week I was also thrilled that our local paper decided to write an article about Barty the Singing Lamppost. If you caught my previous blog you may remember me mentioning this charming unassuming Mentmore park gas lamppost which inspired a 1940s musical called “We’ll Meet Again”. I co-wrote the show and toured with it back in the early noughties with my manager Paul Spence. The Leighton Buzzard Observer went on line with the story on Monday night and it came out in print this Tuesday.

You can read the story by clicking the link. https://www.leightonbuzzardonline.co.uk/news/people/leighton-buzzard-singer-relieved-it-not-end-barty-singing-lamppost-3037164 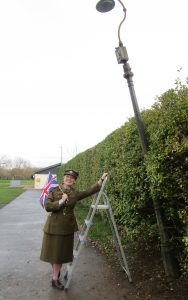 Ladder at the Ready for the Perfect Barty Shot!

With everything else going on in the world at the moment it’s lovely to think that’s this charming old gas lamp is going to be restored and returned to the park. I first became aware that Barty was being removed from the park on Thursday when I was out jogging. The men from the council were having trouble trying to remove him from his footing which only helps to strengthen Barty’s personality and character.

He’s now gone away to be restored but just before he did Charlotte Worrall very kindly took my photo with Barty which the paper used in their article. Thank-you so much Charlotte for your photos.

This week I’ve been cracking on with trying to learn how to do Zoom. It’s not easy especially when it comes to streaming music shows as you need a special mixer which goes from the phone to the amp using a double lead jack. This helps to give the sound continuity rather than relying on the phones mic which can often have breaks in connection. I had a meeting today but I’m still very much at sea with it all and I need to get some practice in before my first  Zoom show on the 1st December.

While I’ve had my equipment set up I’ve been rehearsing and streaming a few of my songs live to Facebook. It’s been good to have some time to practice and I’ve also been going through my press cuttings. I’m pleased I’ve got them filed and up to date. It’s a work in progress and something I hope which will continue to grow. Although much of my press is now on line it’s still good to have paper copies, something I can look back on when I’m an old lady!