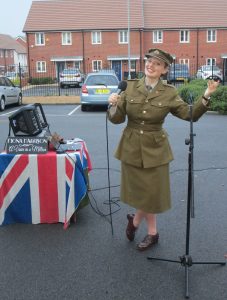 The show must go on whatever the restisions and this week I have been working with activities coordinators to see that their shows can still go ahead in this current Covid environment. No-one wants to be the person responsible for canceling Christmas but nevertheless times are difficult and it’s hard to forward plan. I’m now reselling a lot of my Christmas dates as Driveway Concerts and the response from new customers has been very encouraging.

This Saturday I’ve been invited by Sarah Cursons of the Leighton -Linslade Helpers to film some of my Christmas songs to coincide with the turning on of the Christmas lights in Leighton Buzzard. This year the town is asking people to send in footage of families turning

on their own Christmas lights from home. I’m still not quite sure how they are going to eddit it all together but I expect I 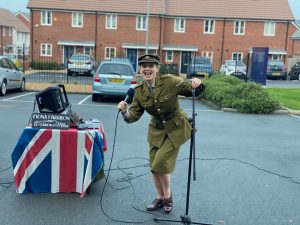 shall be the sound track for the feature so I’m busy brushing up on my Christmas repertoire in preparation for Saturday.

This week I have been out in uniform performing my ATS “We’ll Meet Again” show for remembrance. It’s still very hit and miss and in many cases I don’t know until the very last minute if we are good to go or not. For Remembrance Sunday I had the pleasure of performing at Caddington Grove in Dunstable. Although the home has a visitors suit they are still unable to mix floors, so we took the decision for me to play my show in the car-park. This ment all the 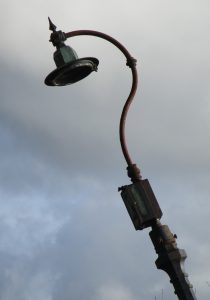 residence could watch me from their gallery windows, as I made the show larger and worked the space.

I always make sure I have more music than I need when I perform and certainly when you work a big area it’s important you move and make the show larger to suit the space (you can see by my mic leads in the photos). All my musical arrangements are custom made and designed for large stages so they can withstand being played at a louder volume. It’s very much a case of assessing the situation quickly and getting on with it and adapting the show to suit the environment. When I’m in a situation like this I always keep the tempo high using as many medley arrangements as possible so the show moves quickly and keeps attention span.

Fortunately it was very mild on Sunday and the show couldn’t have gone better. Come the 11th November it was colder for my Bedford show  but on this occasion I was working in a Covid safe environment and I had a screen between me and the residence 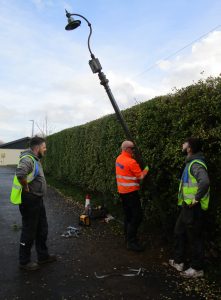 so all was well. When it comes to entertaining the sixty plus age group it’s really too cold for them to be watching shows with doors open and although I don’t mind being outside it’s important everyone is warm and comfortable.

Like the rest of the world I was thrilled to hear that a vaccine is now in sight and hopefully by next summer things will be returning to some sort of normality. The entertainments industry has been badly hit and I hope it won’t be too long before live venues can re-open again. For me I’m constantly adjusting and re visiting my shows to make them suitable for all types of audiences whatever the brief.

Today I was reminded of the “We’ll Meet Again” theatre show I toured in, way back in the early noughties. In this show my co star was a singing lamp post by the name of Barty. Today while I was jogging around Mentmore Park the Edwardian lamp post which inspired Barty’s character was being removed from the park. The man from the council said Barty was going away to be refurbished and the plan is to return him to the park on the other side of the path. I truly hope that this will be the case as Barty didn’t want to leave today and he broke the strap the men were using to try and pull him out of the ground which they had attached to their van.

Later that day I rang the Leighton Linslade council and I spoke to Ian Haynes. He told me it’s got to be cost effective to have Barty restored and possibly re instated, so it’s not a full gone conclusion he will return. I truly hope they do as this little unassuming lamp post inspired a whole 1940s musical which in turn launched my theatrical career.

Fingers crossed Barty will return to Mentmore Park. That’s all my news for now. Keep Following and Toodle Pip! 😉