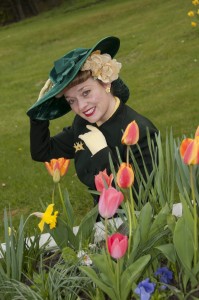 If you caught my last few blogs you will know this week has been all about Easter Bonnet shows which is a great seller for the 60+ market. I’ve just returned from performing in Stoke Hammond today and once again I’m fully booked with shows for the rest of this week. The weather has been a little wet and windy to say the least and it was pity hard going trying to keep my Easter Bonnet on while getting my equipment through the door of the venue today. Although I have been pretty fortunate when it has come to dodging showers. I almost managed to go jogging yesterday without getting wet but the rain just caught me on my last stretch. Rather appropriately I saw a rainbow which made a great cue for that famous Judy Garland number and not forgetting “Easter Parade” and “April Showers” of course which are a must sing for any Easter Bonnet show.

I took Arther in for repair on Saturday so Annabel and I have been making friends and working together since Friday. It’s interesting working with another amp as Arther has been my faithful amp for 18 years. I like his built-in reverb unit where Annabel’s reverb is very subtle. I think in recent years I have been using rather a bit too much reverb only I’m not quite sure why or how this has come about. A friend very kindly did some recordings of a couple of my recent shows and it’s been good to hear the play back. When you stand in the middle and not by the speaker your take on sound is very different. So to be working with Annabel hasn’t been a bad thing. It’s been good to go back to basics and let my voice do it’s thing naturally! 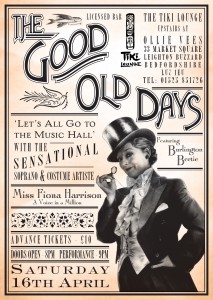 Something to Look Forward To!

Just to keep you up to date with some of my forth coming events I shall be at Bushey and the “1940s Family Esperance” on the 9th 10th April at the Lincolnsfields children’s Centre, Bushey Hall Drive, Herts. I shall be performing 3 x 45 minute non repetitive costume shows daily and also at the Saturday night dance. Do check out the link http://www.fortiesexperience.co.uk/nextevents.html I shall keep you posted with more news about the event over the next few weeks so do keep following.

On the 16th April I shall be performing “The Good Old Days” a Music Hall show up stairs in the Tiki Lounge at Ollie Vees in Leighton Buzzard. Check out the poster for details as it would be lovely to see you. A show in two 45 minute halfs with doors opening at 8pm. For one set I shall be performing in a beautiful Edwardian gown and for the other set as Burlington Bertie, Vesta Tilley style in my top hat and tails – so do join me.

On Saturday I had the pleasure of meeting up with a very interesting gentleman while I was playing at a residential home in Aylesbury. This gentleman’s name was Barry Castle and he was a french horn player at Covent Garden. We spent over an hour taking about musical arrangements and all the wonderful artists he had played for over the years. He told me he started his professional career in 1957 when he got a job at Covent Garden. Durring that time I think he said he had played for 9 Ring Cycles which if you know your Wagner is no mean feat. It plays for over four days and is essentially four big Operas in one. He had also worked with Frank Sinatra and was part of his final tour in 1992 at the Barcelona stadium. Some of the other names he mentioned was Liberace, Shirley Bassy and Morecambe and Wise. In fact he was the french horn player when Morecambe and Wise did that classic sketch There is Nothing like a Dame with the news readers. Classic 70s TV which I still think of today when ever I sing my South Pacific Medley. I can’t tell you how wonderful it was to talk to Barry about his career and he’s the first man I’ve met who atchaly knows who Richard Bonynage was. Richard Bonynge was married to Joan Sutherland and did many musical arrangements for her including an overture to The Merry Widow which Lehar for some reason never wrote. It just goes to show you never know whose in an audience and it was a real honor to speak to him.

That’s all my news for this week Keep watching and I shall keep you posted!