The weeks are flying by and already this week is practically at it’s close. Needless to say it’s Easter Bonnet shows all the way through to Easter Monday, then on the 23rd I have a day of Pearly Queen shows to tie in with St Georges and then it’s off to Italy the following morning. I’m very conscious of what I need to accomplish between now and then so it’s important I pace myself. After my show on Saturday I’m heading off to the recording studio to lay down some Italian which helps me with my song learning.

Today I had two Easter Bonnet shows back to back. The first was in Chalfont St Peter with the 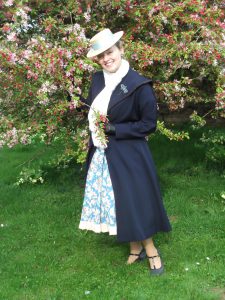 second in Bedford. It’s about an hours drive between as the Sat Nav directed me up the M1. My driving time is very valuable to me as it gives me time to learn songs and think about new musical arrangements. Apart from Italian I’ve been thinking a lot about Disney songs and how I want to group them together when I put my arrangements into production. The only way to succeed is to forward plan and although Christmas seems a long way away it’s not really when I have a complete new show to stage. I’m really excited about this one, producing “A Fairy Tale Christmas Spectacular” with lots of lovely new songs and musical arrangements is something I’m really looking forward to.

I’m still a bit undecided if my Disney medley should just focus on older Disney up to about “The Jungle Book” or whether I should go beyond. I’m keen to use the title song from “Beauty and the Beast” and “A Whole New World” from “Aladdin” as a 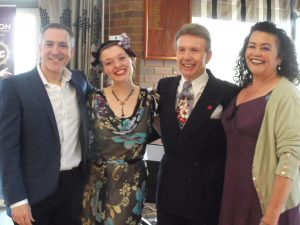 On stage with Bryran, Paul & Mandy!

musical bridge . Now I’ve really sat down to study Disney songs the style of writing is quite varied and the musical styles and voices are compatible to when the films were made.  “High School Musical”and all it’s squeals I will be giving  a wide birth to although I do like the new “Mary Poppins” score and “Reflection” from 1998’s “Mulan”. Mulan reminds me a lot in it’s writing style of Miss Saigon.

At the moment my head is a jumble of music as I experiment with ideas. I shall also be working on a new arrangement of “Oliver” which is less of a 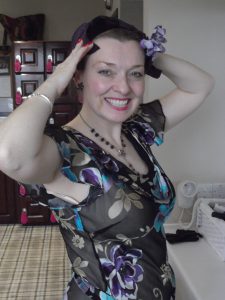 jumble and “Mary Poppins” which couldn’t be more me if I tried.

Last Sunday Paul and I were engaged to perform for a 90th Birthday party at West Essex Golf Club in Chingford.  It was a lovely event as we were engaged to sing the music of the 1920s – 1950s over 3 costume sets. We also had the pleasure of performing with pianist Bryan Edery and compere Mandy as we sang a mixture of music from Charleston, Big Band and Swing to the Hollywood Musicals. Zeena was the birthday girl who was very inspiring as she told me about her time in the West End during the 1940s and how exciting it was dancing with the GIs at Rainbow Corner. Zeena made me realize what is that’s missing from all these current 1940s re-anactment events. It’s the element of excitement and surprise which comes from adventure and the not knowing of what might happen next. 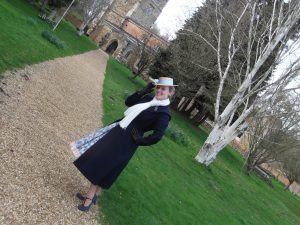 Stopping for Tea at Southill Church!

That’s all my news for now. I shall leave you with a few photos from Tuesday when I was working in Biggleswade and stopped off in Southill for tea at the Church. keep Following and Toodle Pip! 😉