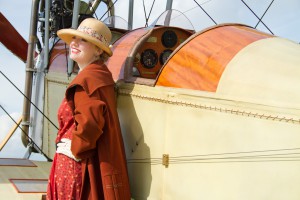 Off to Sing at Flywheel!

Hello every-one it’s been a very busy four days. Since returning home from Normandy I’ve been working flat-out to catch up with my paper work, not to mention smoothing out all those little annoying niggles which seem to get in the way of life. By which I mean a chip in my windscreen which was supposed to be filled in and now needs a replacement, my printer which decided to break down in mid job and a load of stockings which have just decided to go into holes and ladders. Oh what a newsence as I huff and puff!

However saying that I have more or less caught up and I was able to get my printer fixed this morning. Although I’m still worried about my windscreen. The only appointment I could get is for this Thursday and if you have ever had this job done before you will know you have to leave a 5 hour window which I don’t really have. It’s Ascot week and I’m booked to do a Ladies Day Show at 2.15 on Thursday so I may well end up trotting off to the venue on Shank’s Pony if things don’t go to plan! 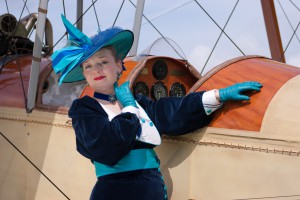 Me with Stephen Slater’s WW1 Aircraft which will be at Flywheel!

Despite these annoying little hic ups I have a full week of shows. On Monday I was in Harrow singing “The Great American Song Book” at The Midddlesex New Synagogue. On Wednesday it’s “Don’t Sit Under the Apple Tree” in Hazlemere, “Ladies Day” in Wing on Thursday, another “Don’t Sit Under the Apple Tree show” in Marlow on Friday and then I’m straight off to Bicester Heritage Airfield for the “Flywheel” event which is taking place on the 20th 21st June. It’s a public event celebrating the history of Aviation, Motoring and Military Endeavor and it’s the first time a major public event has been held at Bicester Heritage – so I hope you can all make it along. You can find out more information by clicking onto the web-site at www.flywheelfestival.com 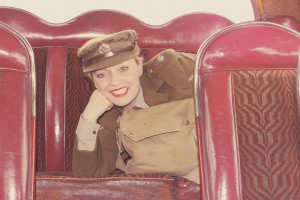 I shall be performing 3 x 45 minute costume shows daily over the weekend and you can catch me on stage in the entertainments marque at 11.30am, 1.45 pm and at 3.45pm durring which I shall be singing a variety of music from WW1 to the Swinging 60s. We have two splendid bands booked too. On Saturday “78rpm” who play in the 1930s Savoy style lead by band leader Michael Law who is also band leader to the Piccadilly Dance Orchestra. On Sunday Richard Whennel’s Jazz Band will be joining us on stage and who I’m sure many of you already know is the brilliant musical arranger and producer of my backing tracks so it’s going to be an amazing weekend. A wonderful gift for Fathers day. So if you are looking for somewhere to take Dad on Sunday “Flywheel is the place to be with so much to see and do for the whole family.

Over the weekend I will be singing a great variety of music covering songs from WW1 to the 1960s. The weekends show itinerary will run as follows so I hope you can all make it along as it would be a shame to miss us:- 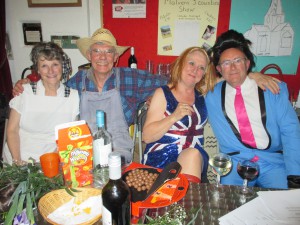 Dispite working at my desk this weekend I couldn’t resist on Saturday night popping along to All Saints Church in Leighton Buzzard for a very special fund-raising event which this year took the shape of “Stars in their Eyes”. When I heard that Canon Grant Fellows was doing Shirley Bassey I couldn’t resist and belive me the night didn’t disappoint. It was one of the most entertaining evenings I’ve ever been to with a lot of very scary Spice Girls, Cliff Richard as I’ve never seen him before, back by the Cliffettes, Harry Bellafonte and Odetta singing “There’s a whole in my Bucket” were a wonder to behold and who also brought with them a complete set of garden furniture. We even had The Inn Keeper “Thenardier” from Les Miserables! The church was packed and we were all in stitches from beginning to end which just goes to show what a wonderful group of good sports we have at All Saints Church! 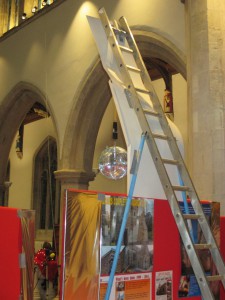 Behind the Scenes with the Whirling Ball!

Just in case you are wondering who won – well it was the Canon singing Big Spender. For the finale he led the singing performing “One Day More” from Les Miserable as members from the audience stood up and sang all the various parts. I was particularly impressed by the young girl who sang the role of Eponine. I don’t know who she was but her voice was excellent and she really stood out as a star singing beautifully. So much work went into this production which had all sorts of little touches from dry ice as the artists walked out from behind the screens to films introducing the performers going about their daily biz. I also loved the way the way someone had hung the whirling ball on a step-ladder. Simple but Brilliant!

Thank-you All Saints for a Wonderful Night!

That’s all my news for now but on the 27th June I will be off to Birmingham for Armed Forces Day . Keep Watching and I shall keep you posted.