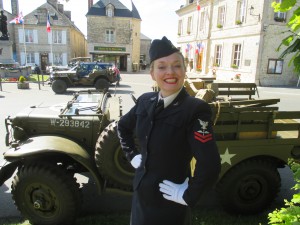 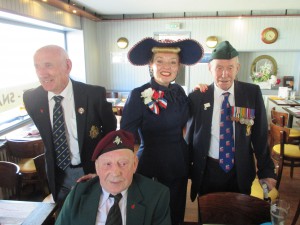 Out and About with Veterans in Arromanches! 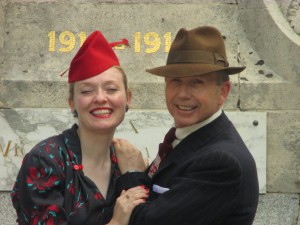 Paul and I out and About in Carentan!

Hello every-one it’s been a thrilling 10 days away. I’ve just returned home from Normandy after performing at the D-Day Commemorations in Ste Marie du Mont. After the hussel and bussel of last year’s 70th this year was so much more enjoyable with-out the endless stream of VIPs. I know I shouldn’t say it but I wish the VIPs would stay at home. The security was a real pain last year and makes a straight forward singing job 100 times harder which it shouldn’t be. This year was so much more relaxed and Paul and I enjoyed the informal French way of things performing outside the church in the center of town. In fact we enjoyed ourselves so much we added in a few extra performances on the Friday and Sunday which was greatly appreciated.

Ste Marie du Mont is only a small village but it has a wonderful church right in the centre where all the re-anacters congregate and set up their war-time displays. It makes for a a fabulous show setting and I’ve kind of learnt to go with the French flow. For those of you who follow me will know I go to great lengths in planning my shows. This year I was booked to perform 1 x 60 minute 14.30 show  + 2 x 45 min sets on the Saturday night for D-Day. When we arrived I noticed one of the brooches had the time wrong and printed 15.30 so I decided to do two sets just incase which turned out to be a smart move. The more I sing the more CDs I sell and this weekend I have done rather well with sales. 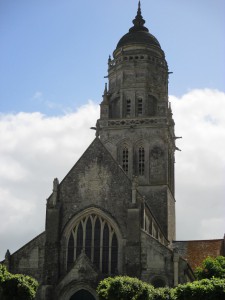 When I plan a show I always like to work in a plan B  & C just in case and come the 21.00h show we were scheduled to break in the middle for the arrival of two WW2 tanks. As it happens the tanks got stuck on Utah beach and I played a straight through 2 hour set which went down really well with the audience. Paul has been working with me on  sound and is becoming a singing star in his own right. His Sinatra style couldn’t be better and to quote one review it’s time for him to hang up his bath robe as the World Famous Unknown Bathroom Singer and launch his first album which I couldn’t agree with more! So come on Paul it’s time to get recording!

For many years I have played inArromanches at Gold Beach forD-Day but this year was a little different and I changed my show to suit the American Beach and mostly French audience. Paul’s Sinatra tunes proved very popular and every year I try to learn a new French song. I’ve found from experience you can’t really go wrong with Edith Piaf. 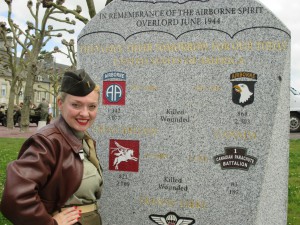 It’s wonderful to have a French audience singing along with you which also makes me breathe a sigh of relief thinking “Thank goodness I’ve learnt and sung that number right”! This year my new song was “Sous Les Ponts de Paris” Under the Bridges of Paris although my favourite French songs are “J Attendrai” and “La Vie en Rose” which always gets the crowd singing. I also included “There’s a Small Hotel” a song which I felt would suit Ste Marie du Mont rather well. One of the lines states “Looking through the window you can see a distance steeple, not a sign of people, who wants people.” Not that we were short of people for D-Day! In fact after our Saturday night show who should pop along but the wonderful 3 girl harmony group The Polka Dots who had been wooing audiences in Ste Mer 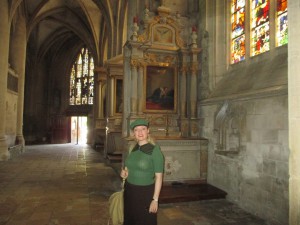 Visiting the Church of Carentan!

e Eglise. It was fantastic to see you all and I was so touched you came along to see me. Keep up the good work ladies and we must make D- Day a regular thing! xxxx

Oh that reminds me speaking of D-Day and friends Paul and I were thrilled to bump into D Day and Bev from Hastings coming over on the Ferry and yes D Day really is called D Day as he was born on 6th June 1944. Just like the invasion our crossing was rescheduled due to bad weather. We had both booked to sail from Portsmouth to Cherbourg on thefastcat only we were rescheduled to the ferry and ended up coming into Caen/Ouistreham. The crossing was really bad but I’ve learnt from experience to always book a 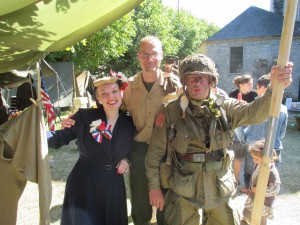 Between Shows with American Re-anacters! 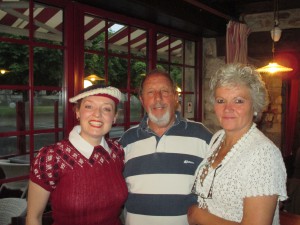 Dinner with D Day and Bev! 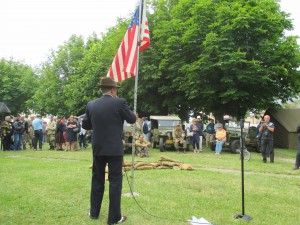 Paul on stage doing his Thing!

cabin. As long as I get my head down I’m fine although Paul can cope with bad seas having served in the merchant Navy. I was ok going out as I slept in the cabin but coming back on the fastcat I ended up with my head in a sick bag. One of these days I will make that Fastcat crossing with-out the aid of a sick bag! I’m not very good at sea which is to my shame especially when you consider I’m from a Nortical family – Ahoy There!

This year Paul and I were able to do a bit of sight-seeing between shows and it was lovely to visit some new places. I’m now starting to know my way around Normandy quite well although I still haven’t been able to make it along to Pegasus Bridge. Paul and I were staying in Ste Marie du Mont and I enjoyed visiting Carentan for the 1st time even though I wouldn’t recommend the L’Escapade restaurant at 28 Avenue de la Gare. Paul and I had a dreadful meal in there. Bad service, over priced and terrible food so be warned don’t dine there. Ste Marie du Mont on the other hand has two wonderful restaurants opposite the church and both are excellent!

Oh gosh I’ve just noticed the time and now I’m back at HQ I have so much paper work to go through. I’m going to be working flat-out all weekend to clear my desk of contracts and e-mails. My next show isn’t until Monday 15th but then I have shows every day next week right through to the end of June with a busy July ahead. Don’t forget you can catch me in Bicester at the Flywheel Event on the 20th and 21st but I shall be telling you a little more about that in my next blog.