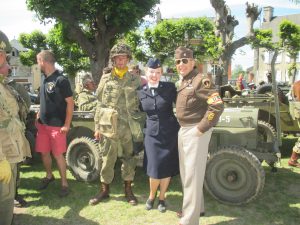 Paul & I Between Sets In Ste Marie du Mont! 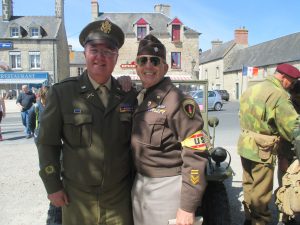 Paul with Our Friend Amedeo Ceci!

After enjoying a lovely dinner with the Dumas family and fellow singer Miss Paramount on the Friday evening Paul and I were looking forward to our next show in Ste Marie du Mont. Miss Paramount and I had both been booked to play Ste Marie du Mont on the same day Sunday 4th June. I from 12.00 noon through to 6.00pm singing 20 minutes on 20 minutes off all through the day and Miss Paramount in the evening from 8.30pm for a straight through 60 minute set. When I was asked about which time I would like to fill I choose the day time slot. I find day time shows are more relaxed and it enables me to talk with the public between sets. 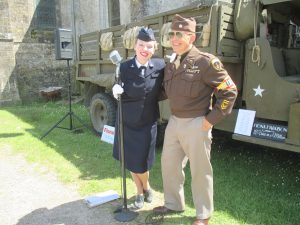 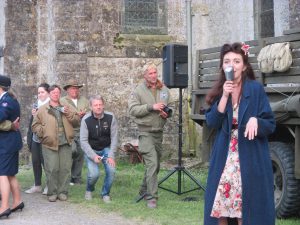 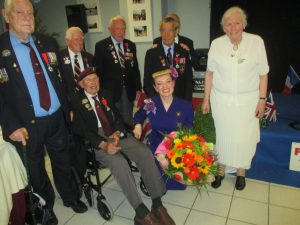 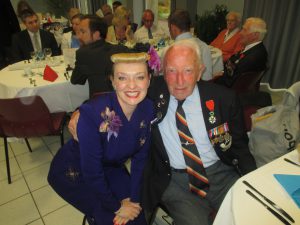 Me with D-Day Veteran Reg Charles!

on. Every year re-anacters visit and set up a 1940s camp in and around the church which has become a great tourist attraction. It’s just in land from Utah beach so there are people passing through all day and it’s a great place to stop and grab a bite to eat due to the fact the organizers have a bar and BBQ running all day. I designed the 20 minutes on 20 minutes off package with Ste Marie du Mont in mind as it works so well with their US Camp set up and regardless of what time the tourists happen to visit every-one gets to see a show.

Over the course of the day I performed 7 x 20 minute shows plus 2 x 30 minute sets to fit in with the hour. It’s fun working this way as it allows me to sing a few of the other songs which don’t always make it into a 2 x 45 minute show plan. Believe it or not I sung my way through 80 numbers and I still had a few extra songs I couldn’t include after running out of time. I also changed my uniform from US WAC to US WAVES which being navy blue I thought would break up the endless stream of kaki tents and vehicles.

Paul and I had been very lucky with the weather al 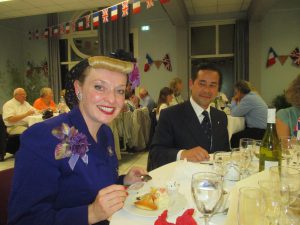 though when it was time for Miss Paramount the sky’s did look a little black but fortunately it didn’t rain as she delighted every-one with her vintage music. Fortunately as my sound system was already set up I let her use my rig as my speakers are waterproof and can cope with a few spots of rain.

Next day Paul and I made our way over to the town of Benouville which is famous for Pegasus Bridge and was the first village to be liberated during the D-Day invasion. I had been invited to sing at the Mayors dinner and before hand there was a special concert performed by a police band which many of the local people attended along with the veterans. I was only required to perform a short 30 minute set between the main and dessert courses as after the dinner at midnight a special service is held every year to remember the fallen.

Whenever I tour anywhere I always make sure I bring a selection of clothes and costumes as it had been my intention to wear an evening gown that night. As it turned out I wore a suit which was much more suitable due to the fact the evening stated with an out door concert and as the dinner wasn’t a black tie event one might have looked a little over dressed. Over dinner I met up with fellow singer and Mezzo Soprano Emma Brown who was singing later that evening at the Pegasus Bridge ceremony. Emma and I are a little like ships which pass in the night. During this Normandy tour we had both been played the same towns but at different times so it was great to meet up and have a girly chat about music and repertoires. Although Emma Brown works more within the classical world as a ceremonial singer our repertoires crossed quite a bit with national anthems, hymns and arias and I enjoyed comparing notes about microphones orchestras and sound systems.

I always put a lot of thought into my show plans and on this occasion I included “The Marsellaise”, “Under the Bridges of Paris”, J’ Attendrai and Puccini’s “O Mio Babbino Caro” as the Mayor is Italian and I thought an Italian 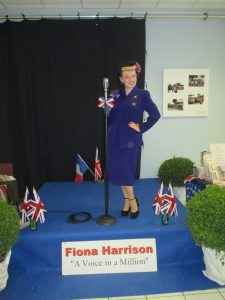 All Ready to Sing!

number would go down well along with my French songs. Most of the audience were French so I finished my show with Edith Piaf’s song “Mon Dieu” which went down extremely well with both the French and Veterans. I did think about closing with my Vera Lynn medley “The White Cliffs of Dover” and “We’ll Meet Again” but I think you can sometimes have too much of a good thing and even the veterans enjoy hearing something different from time to time!

Afterwards it was a great honor to meet the veterans from Pegasus Bridge and to have my photo taken with them as we owe them so much to these wonderful men. So thank-you to Steven for inviting me to the Mayors dinner and in my next blog I shall tell you more about my shows in Arromanches on the 6th when Steven brought along my chorus line of “Tiller Boys”.

Keep Watching and look out for Part 3 as I tell you more about my Normandy Tour! 😉