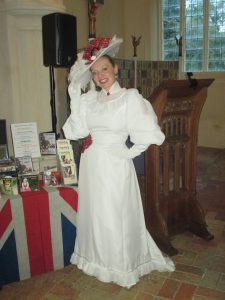 In Music Hall Costume at Southill!

Hello every-one as you can see I’m back at my desk after a busy 10 days away performing for the D-Day commemorations in Normandy. In fact it’s been non stop and I have so much to tell you about my tour that I’ve decided to split my blog into three entries this time which I will share with you over the next week or so. To-day I’ve been trying to catch up with all my e-mails so if you haven’t heard from me yet don’t worry I’m on the case and I hope to answer you all in the next day or two. I had over 100 e-mails sitting in my in box so lots to get through.

If you’ve been following Paul and I on facebook I expect you’ve already seen some of my photos from our time away. Since driving home on Friday I had a very quick turn around and I was straight out the next day performing Saturday night in the charming Bedfordshire village of Southill. So thank-you to every-one who came along to see my show at All Saints Church. I love singing in church 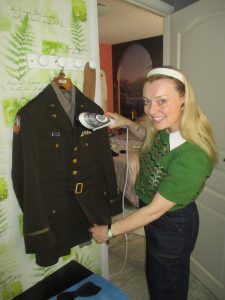 Prepping Our Uniforms for the Show!

and there is something very beautiful about the village and the church of Southill. I came across it by chance in March and after a chat over tea the village committee decided to book me to do a Music Hall come Last Night of the Proms show for them on the 10th. I confess on Saturday I was a little at sixes and sevens having not quite got over singing my 1940s and French repertoire and then switching back to Music Hall and ceremonially songs, but like they say all was alright on the night and a great time was had by all!

Paul and I sailed over to Normandy on the 1st of June and our first morning in France was spent steaming our clothes and prepping our uniforms ready for our performances. It’s hard to believe but I performed a staggering 14 shows in 5 days which is one big sing and not an itinerary for the faint hearted. I believe it is important to look well turned out and both Paul and I 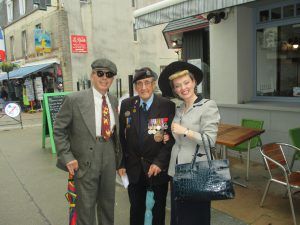 Meeting Up with Veteran Len Cox in Arromanches!

brought a large collection of clothes and uniforms which all needed to be checked over and steamed before stepping out on stage.

We allowed ourselves one day holiday and we spent our Friday afternoon in Arromanches where I was delighted to meet up with D-Day veterans Len and Harry. Arromanches isn’t Arromanches with-out Len and Harry especially Len who often joins me on stage and sings along with my show. That evening we were invited to dinner by my friend and fellow French singer Megane Dumas who is better known in France as Miss Paramount. We met last year in Arromanches and we 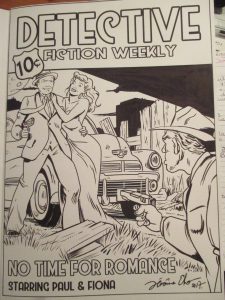 Jerome’s Cartoon of us Both!

have been friends ever since. Her family follow my career on facebook and her father is Jerome Eho a very well known cartoonist who presented Paul and I with a wonderful cartoon drawing featuring the pair of us as characters in Detective Fiction Weekly. This is something we will treasure forever.

Our first show was in the town of Ste Mere Eglise at the Airborne Museum. Security has really been stepped up since last year and it’s now no longer possible to drive straight into the town. However getting into the museum isn’t a problem as they have big gates at the back and a large garden which I was able to drive straight into. To begin with we had one of those heart stopping moments where we weren’t able to get any power off the museums extension cable. But rather fortunately all my friends from Italy and Graffignana turned up and they were able to get the power 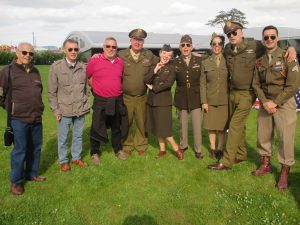 Meeting Friends from Italy at the Airbourne Museum!

working which I think took at bit of  brute force. It was lovely to see so many friends as I performed my “GI Jive” show and Paul dazzled the audiences with his singing.

In my next blog I shall tell you about our 9 shows in Ste Marie du Mont and working the stage with Miss Paramount! 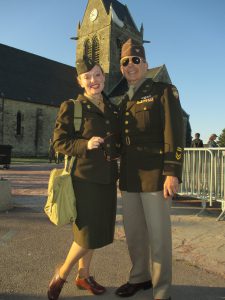 Paul and I in Ste Mere Eglise!