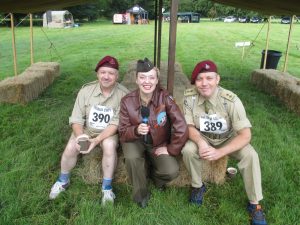 With Ian and Stuart Pope, Tom and Dick! 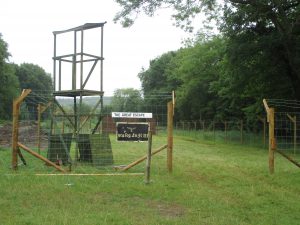 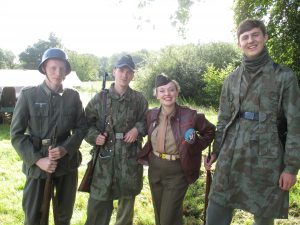 This Saturday Paul and I were performing at Henley on Thames for “Intrepid Events” and “The Great Escape” which was billed as Heroic and full of high adventure. It featured a 10k course and 20 plus obstacles which included the Ives Climb, Cross the wire and the Bed-board carry while a group of re-anacters played the part of Germans and French resistance, shooting at the runners as they made their escape to freedom.

I had given this event a great deal of thought and both Paul and I were looking forward to doing something completely different.  My job was to compere and interview the runners as they jumped and swung their way over the finish line into Switzerland while singing a selection of songs from the 1940s so as to put the runners in the mood and to take them back in time to the second world war.

Paul and I had arrived the night before along with many of the re-anacters who were working hard on building the prisoner of war camp complete with barbed wire. Paul had driven up from Portsmouth in Gladis his motor home and as I had had a show that afternoon not far away in Lane End I was able to come straight on afterwards.

That night the weather turned bad and I hardly slept a wink as the rain was really heavy. However by morning much of the rain had cleared away and the sun was shining so we started rigging at 7am.  Fortunately Paul had a spare pair of Wellingtons which were much more sensible than my service shoes so I opted to wear trousers and my American A2 which was much more practical under the circumstances. The event organizers had kindly hied in a jenny  for us to use, only when it came to plugging in we found the fuse had gone in the plug but luckily one of the food stall holders 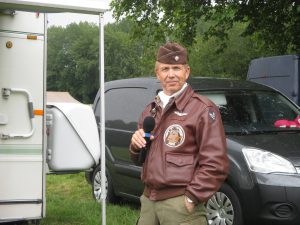 The German Bakery had a spare jenny which was a real life saver.

Over 200 runners took part in the event which was run over five waves. The first wave went at 9am with the last wave at 12.00 noon. Paul and I started our show at 8.30am and played continuously through to 2.15pm while I interviewed runners and read out facts about the groups and the individuals taking part. This included Ian and Stuart Pope. They came as Tom and Dick having lost Harry somewhere along the way and who completed the course in their British battle dress uniforms. Ian and Stuart were 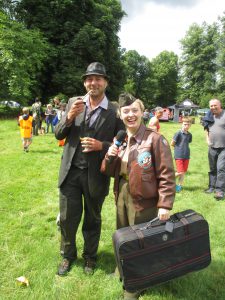 my first audience of the day as I met up with characters such as The Dodgy Builders, a group of chaps on their Stag do and The Barmy Army. First over the line was Lee Alexander and by 12.00 the rain was starting to begin again. Fortunately we didn’t do too badly with the weather and those runners in the first and second waves enjoyed the best of the day before the heavens opened.

This weekend Paul and I will be returning to Wales and singing for the Blaenau Ffestiniog vintage car show which takes place in the center of town. We will be travelling on the Saturday and performing that evening a Dinner Cabaret at The Bridge Cafe songs from the 1920s and 30s. On the Sunday I’m booked to perform 2 x 45 minute shows one uniform and one glamour plus a show for the children introducing them to the music of the 1940s which should be fun. 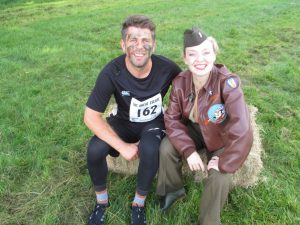 All Ready to Run!

That’s all my news for tonight as I must crack on with my show plans. Keep Watching and Toodle Pip! 😉