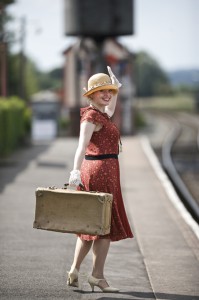 Off to The De La Warr!

It’s just a quick post tonight as I’m all packed to head off first thing tomorrow morning down to Bexhill for the Roaring 20s event. The event is taking place on Saturday out-side the De La Warr Pavilion. The De La Warr sits right on the sea front and was built-in the Art Deco style by architects Erich Mendelsohn and Serge Chermayeff who won an architectural competition initiated by Herbrand Sackville the 9th Earl De La Warr, after whom the building was named. So quite the perfect location – even if the De La Warr wasn’t built until 1935 but I wont tell if you wont shhhh!

I’m really thrilled to be returning to the De La Warr as it’s a theatre I know really well. In 2001 I played it 6 times in one year and I’ve performed in many different productions on that stage from classical concerts with Opera South East to my own touring theatre shows “We’ll Meet Again”, “Down Paradise Row”, “From Cobbles to Rock” and “How HOVIS Won the War” to  name but a few. On Saturday I will be performing out on the band stand which I’ve not done before and I’m looking forward to doing so very much. I’ve been engaged to perform 2 x 45 minute shows daily one at 1.30pm and the other at 3.30pm although times may change slightly due to so much going on. At 1pm there is going to be an attempt to beat the world record for the most people performing the Charleston dance and then I’m on stage straight after so it’s all very exciting. I’ve just picked up a new song for the occasion “If I had a Talking Picture of You”. It’s one of those numbers I’ve been wanting to do for ages so I’m trilled the right event and opportunity has come along so I can. I picked up my new track on Tuesday and I’ve been rehursing it all week. I love this period in music and on Saturday I will be performing a mixture of tunes from the 1920s and 30s with a few going back a little further to Music Hall so I hope you can all make it along. Last year the event attracted 15,000 visitors but this year they are expecting 25,000. So see you there! To find out more click onto the Roaring 20s web-site at www.bexhillroaring20s.org.uk

Must dash as I need to get to bed. I have shows everyday next week and on Thursday I’m performing at RAF Marham so lots to do.