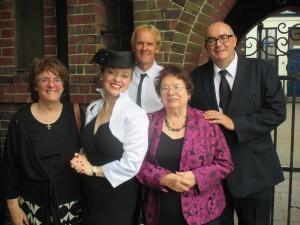 Gillian, Peter, Graham, My Mother and I 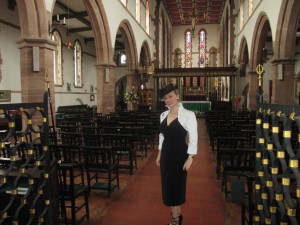 The Church of St Albans, Portsmouth

This weekend has been quite extraordinary. On Saturday night I was at Susan and Graham Humphrey’s Wedding which had a James Bond black and white theme. I so wish I had brought my camera but as I had swapped my usually large Kelly bag for something smaller I wasn’t able to fit my camera in. Oh Drat! Susan and Graham had hired 3 James Bond character look alikes which took the shape of Odd Job complete with hat, A Daniel Craig James Bond and Jaws who was a little over keen to bite my neck I have to say! However I just told him to think of “Moonraker” and to imagine me with plates and glasses which he did as we danced the night away – Such Fun! So tall and what teeth! I wonder how he cleans them? It’s not every night a girl gets to dance with Jaws!

After the highs of Saturday night and in complete contrast my mother and I have just come back from Portsmouth after attending the funeral of my God father Kenneth Byrne. Uncle Ken was truly the very best of men and he will be greatly missed. Ken’s funeral was held today at the Parish Church of St Albans, Copnor, Portsmouth and was a full Requiem Mass which was attended by all who knew him. Ken served 22 years in the Royal Marines and it was wonderful to meet up with some of his old military pals and hear them tell of the  scrapes Ken found himself in while serving out in Korea. I loved the one about the bank he blew up only to find that all the American Dollars he and his pals thought they had liberated were counterfeit. 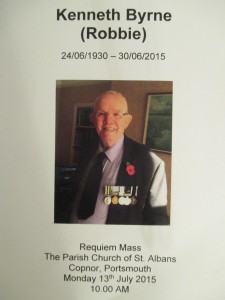 My mother was born and grew up in Portsmouth so knows the church of St Albans really well. She was married there and I was Christened at St Alban’s so in some ways it was a little like coming home today. I’m really pleased I was able to take a photo of us all together today as this may be the very last time Gillian, Graham, Peter my mother and I all come together. Although a little older Gillian, Graham, Peter my brother and I all grew up together and my father would often take us all out on trips when we were down during our holidays. Now Ken and Barbara have both gone I feel this marks the end of an era and Portsmouth wont quite feel the same.

I had forgotten just how lovely the interia of St Alban’s Church is. It was built-in 1914 although the font dates back to the fifteenth century and originally stood in the first Portsea Parish Church in Kingston, Portsmouth. Durring it’s life the font has stood in the church of St Mary’s and was later presented to Copnor and dedicated to St Alban in 1914. Isambard Kingdom Brunel was baptised in the font in 1806 and Charles Dickens in 1812 when the font was at St Mary’s Church. I was christened in the same font in 1970 – what a history! 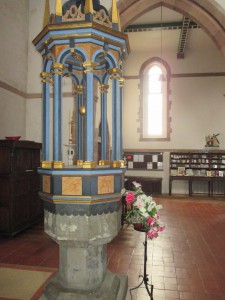 Tomorrow I’m back in the recording studio picking up a new 1920s track of “If I had a Talking Picture”. One of those little gems I plucked from my Mrs Mills Party album song book. I’ve been wanting to do this song for years and with the Roaring 20s event down in Bexhill this Saturday I thought now would be the ideal opportunity. Richard has just sent me through the rushes and it sounds super!

I have a very busy week all this week with shows every day so it’s time for me to dash!

Keep Watching and I shall keep you posted on my show times down in Bexhill on Saturday.