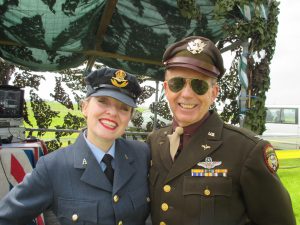 On Stage with Paul at Carew! 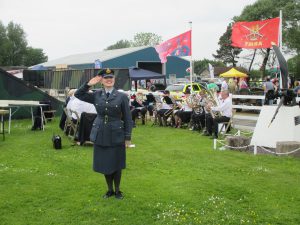 Hello every-one I’ve just got back after a fantastic weekend in Wales performing for Mil-fest  at Cheriton Control Tower, Carew in Pembrokeshire. For any-one who’s ever driven to Pembrokeshire it’s a jolly long way from Bedfordshire but well worth the drive as it’s as far as you can go along the M4 and then further still along the A40. It’s easily five hours although I confess with the bank holiday traffic on the Friday night it took me more like eight and I was very pleased when I did eventually reach my destination.

Although a long way it’s well worth the drive as Mil-fest attracts some lovely people, mostly local and it was a pleasure to see so many friendly faces from last year along with lots of new people who had heard about the event and 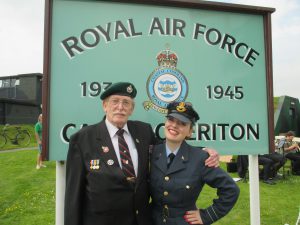 Meeting Up With Terence! 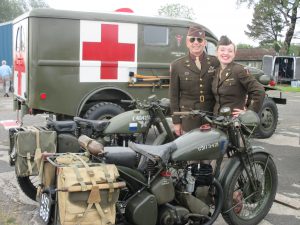 who wanted to experience the atmosphere.  In my career I’ve played lots of large 1940s events although in many ways I prefer the smaller ones where I can use my talent to the full to do some good.

I’m able to do the singing work of  four people and for this weekend I enjoyed mixing The Best of British with Hollywood Musicals and American Swing which I performed in a combination of 1940s Glamour costumes and WW2 uniforms. It’s true it doesn’t matter how small an event might be you never know who you might meet up with in an audience. While I was at Mil-fest I met up with Terence Warner one of my postal CD customers who came along especially to see me and a musical arranger who loved and appreciated all my musical arrangements. I spend a fortune on music and I can honestly say I have the best arrangements in the business so it’s wonderful when someone remarks on the quality of my backing as these things really matter and make a show.

On this occasion Paul was able to join me in Wales as we had been booked to perform three shows on the Saturday at the control tower and then 2 x 45 minute sets for the Sunday night dance. It was my second time in Pembrokeshire having played Mil-fest for the first time last year and this year the organizers Mike and Sue decided to host a 1940s dance which attracted people from as far as fifty miles away. I think we can say a jolly good time was had by all and a big thank-you goes out to Mike and Sue who kindly put us up at their 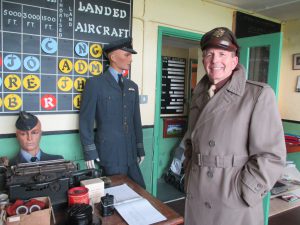 farm and every-one who came along to support this wonderful community event.

Now I’m back home I’m feeling the pressure as I head off to Normandy on Thursday and sail first thing Friday morning. I still have my costumes and show plans to sort out so to keep you up to date with my Normandy tour here is my show schedule and it will be delightful to see you if you can make it along to one of my performances.

Paul and I with Sue and Mike at the 40s dance!

This year we have moved the musical style on a little to the 1950s and 60s for Arromanches big event on the 9th June but don’t worry I will still be performing some of the 1940s favorites and Paul will be singing too in the Sinatra style. This year Arromanches wanted to breakaway for the British “We’ll Meet Again” Veteran style of ATS show and move towards American Rock and Roll so the 9th should be a great night. I have a fantastic show planned with lots of new material I’ve not performed in France before.

This will be my last blog before Normandy and I look forward to catching up with you all when I get back after the 11th June. Keep Following and I shall keep you posted when i will have lots of lovely photographs to share with you all.