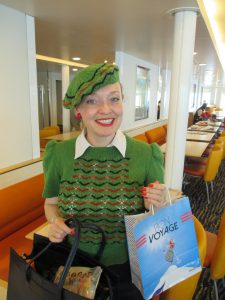 Hello every-one and as you can see I’m back at my desk catching up with my blogs after my Normandy tour. It’s been a fantastic 10 days away and I have so much news to share with you all I hardly know where to begin. Since returning home last Monday I’ve hit the deck running. I had a mountain of e-mails and contracts to catch up with plus I’ve been out every day performing.

Firstly I’d like to start by saying happy belated birthdays to Joe and Brian. I hope you liked your presents from Normandy and thank-you Fay for your lovely letters and earrings. I particularly like the pink ones they look very vintage and I know just what I’m going to be wearing them with so thank-you.

Once again I’ve decided to split my D-Day blogs into several episodes so do keep following my social media. If you follow 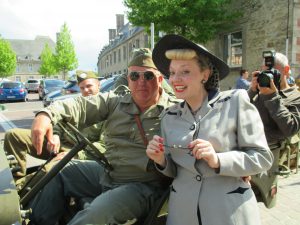 In Carentan with Keith!

my pages you will know my turn around from Wales was very tight especially as I had a very busy May schedule. I always like to be well prepared and on this occasion I ended up having to do much of my  show programming out in France. This isn’t really how I like to do things although I had made sure all my play lists were typed up. In the end I just ran out of time although I always make sure I have a couple of spare shows just in case which as it happens turned out to be very useful. While we were out in Normandy Paul and I were called upon to perform two extra shows in Arromanches so it always pays to have 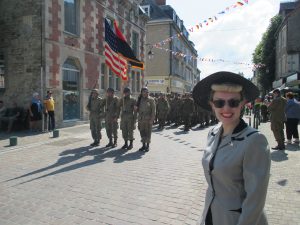 Before the Parade passes By!

My tour began on Thursday when I traveled down to Portsmouth on the 31st May as Paul and I were booked to sail first thing on the 1st June ferry. I confess I didn’t get away from Leighton Buzzard until gone 11pm after spending all day preparing and packing. I can’t begin to tell you how relived we were to get our heads down in the cabin as Paul had been dashing against the clock to get everything ready too. I so needed that rest as it’s important when you arrive you look well turned out and refreshed ready to sing any time, any place, anywhere. It had been my intention to wear 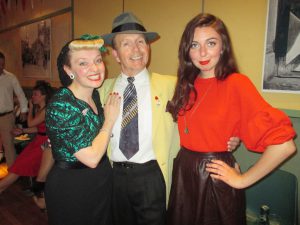 Paul and I with Miss Paramount!

a 1940s suit but on this occasion I had to make do with trousers and 40s knit wear.

We had been invited out to dinner on Friday night by our friends the Dumas’s. Their daughter goes by the stage name of Miss Paramount and apparently after she saw my show in Arromanches in 2010 she announced to her parents that she wanted to become a professional singer and she has been following that dream ever since. I feel very proud I have inspired her to sing. She is now doing very well in France and on Saturday night Miss Paramount was engaged to sing at the dance in Carentan so naturally we 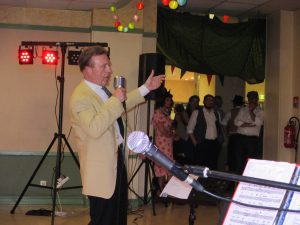 Paul on Stage Doing His Thing!

were keen to see her. Paul was also invite to sing as they wanted a male singer to complement the billing.

During the day we visited Carentan and watched the parade pass by which included many of our friends from England. The 1st and 2nd of June were lovely days  as the sun shone. It’s all about being in the right place at the right time and we were also booked at the very last minute to perform in Arromanches on the Sunday afternoon. I think this had a lot to do with the glorious weather and the fact Paul Chapman 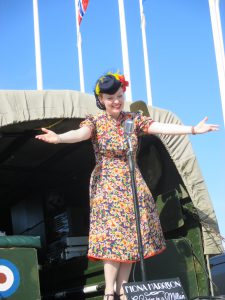 just happen to pull into town in his Austin K2 Lorry.

I’d met Paul some years ago back in 2004/09 when I sang in the town of Ver-sur-Mer for the 60th and 65th commemertaions. Before we knew it Paul Marsden and I were called up to jump on the back of the K2 ENSA style and preform a flash concert. This went down very well with the Mayors offices. The flash concert was something of a try out for 2019 and I look forward to seeing Paul Chapman and his K2 next year which I think is going to be used to make up the stage for the D-Day breakfast.

In show business anything can happen and this just goes to prove how important it is to always be prepared for the unexpected. As soon as I arrived in Normandy I spent the afternoon programming my shows, checking through my show plans. Sundays performance couldn’t have gone better and it 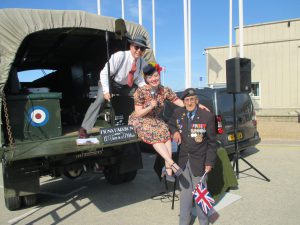 On Stage With Veteran Len Cox!

was nice to earn a little extra cash thanks to Arromanches Deputy Mayor who is a big Frank Sinatra fan. Paul is now starting to become a name in his own right and the combination of our voices is proving to be a big hit in Normandy.

Our next shows were booked for Monday and took place at Utah in the town of Ste Marie du Mont. I shall tell you more about that in my next blog along with our performances in Benouville at Pegasus Bridge for the Mayors D-Day Dinner.

I hope to get the second installment out in the next few days so keep Following and enjoy the photos.