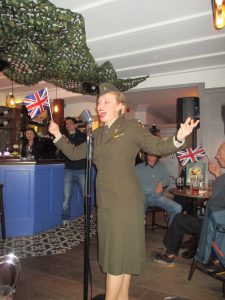 On Stage at Hudson’s Ale House!

Hello every-one It’s been a great weekend. This Friday I was performing in the town of Trumpington which for those of you who don’t know is situated on the out skirts of Cambridge. I had been engaged to sing for a special Blitz Party to celebrate The Hudson’s Ale House’s first anniversary, and what a great night we all had too. Paul had driven up from Portsmouth especially and worked with me as my sound engineer. He also sang too and delighted every-one with some of Frank Sinatra’s popular tunes. Every-one dressed up and on this occasion I had been asked to perform in my US WAC uniform up tempo tunes from the 1940s. So it made a change to give the show an American flavour with a few British tunes thrown in. Of course no 40s show would be complete with-out finishing with lots of flag waving and “Land of Hope and Glory”. So think-you Hudson’s for inviting me. Paul and I had a fantastic time and it was lovely to sing for you all. 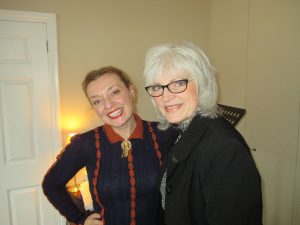 Me with my Singing Teacher Liz Harley!

This Saturday was one of the few Saturdays where I didn’t have a show so I took the opportunity to see Liz Harley my singing teacher. Liz teachers from her home in Welwyn Garden City and I’m very pleased to have found her. I’ve been in show business for nearly 25 years now and when you have been singing for as long as I have sometimes things need a little tweak.

I first started going to Liz just before I went out to Milan as I wanted to brush up on my Italian. I’m also working on my technic as I felt my vibrato was becoming a little way ward. I’m 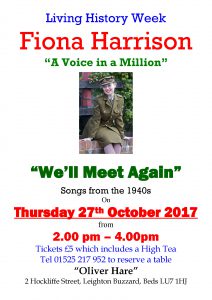 already starting to hear an improvement which in my case was all about placing the touge lower in the mouth. Hitting the high notes has never been a problem. I have the vocal tone of a coloratura soprano even though it’s not really coloratura work I do. However saying that this week I started work on “The Laughing Song” from “Die Fledermaus”. This was one of the first arias I learnt back in the day and for a long time was my party piece. I confess it’s been something like 16 years since I last sang it so it was lovely to go over it again with Liz and I’m looking forward to recording it early next year.

In the mean time I shall be performing this Thursday in my home town of Leighton Buzzard at the Oliver Hare for Heritage Week. This year it’s all about the changing face of pubs over the years and I’ve been booked to perform my 1940s “We’ll Meet Again” ATS show. If you would like to come and see me the afternoon costs £5 which includes a High Tea from 2pm – 4pm. I shall be on stage at 2.30pm for 60 minutes and you can reserve a table by calling the Oliver Hare on 01525 217952. There’s only limited space so do book to avoid disappointment as it would be lovely to see you.

That’s all my news for now. Next week it’s all about Halloween as I go all Witchy poo with my “Fly me to the Moon” shows. More on that in my next blog.