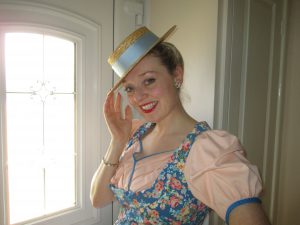 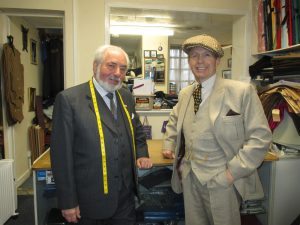 Paul with His Tailor Alex Bentley!

Let me start my blog to-night by wishing all my Irish followers a very happy St Patricks Day. I’m sorry it’s been a while since I last wrote but I’ve had a very busy few weeks what with one thing and another. I’ve been away the last six days performing on the south coast and in between times Paul took me to meet his tailor Alex Bentley in Southsea. Paul has just had made an Irish Tweed 1930s design Bi swing suit with a half belt which he likes to wear with his 1930s Dobbs Trilby or flat cap. He’s had it made for this coming season which is starting to shape up nicely. Between shows I’ve been catching up with my contracts and e-mails and I’ve already sold in excess of 200 shows for 2018 which is very encouraging.

I had a show in Cambridgeshire on Mothers day and then  I dashed down to Portsmouth straight after my show. On Thursday I drove back after my performance so I would be ready for last nights show at Wellingborough Golf Club which couldn’t have gone better. Paul and I were engaged to sing for a Golden Wedding Anniversary as we performed a mix of music from the 1930s through to the 70s. 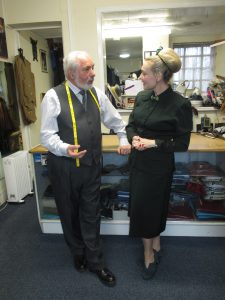 Having a Chat with Alex!

As with all my shows there is a great deal of hidden preparation which I need to do so my performances are seamless. The trick is to predict and to always have a plan B and C ready should it be necessary to change direction. I spend a lot of my time programming and typing up show plans. I’m currently expanding my 70s and party repertoire which I know will be a good business investment. For the next three weeks it’s going to be a run of “Easter Bonnet” shows the first of which I performed last  Thursday and it’s among one of my favorites.

Speaking of shows my first radio show went out on 1940sradio.com  last Sunday and Tuesday and as yet I don’t know how I’ve done. I’d like to hear the show I recorded again just to refresh my memory. This weekend I plan to record a couple of more shows and while I’ve been away I’ve had lots of ideas which I must put forward to the powers that be. I’m 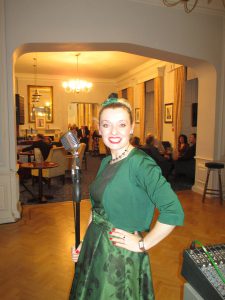 On Stage at Wellingborough Golf Club!

quite keen to give my shows a theme and I’ve  already put together the content for another four programs. I don’t want to run before I can walk so I’m taking things slowly and I would like my shows to have a strong Hollywood movie musical content as that’s where my expertise in vintage music really lies.  Watch this space and I will keep you posted!

Next week I have a couple of important meetings I must attend and I’m also booked in to have all my equipment PATS tested. Yes it’s that time of year again. I’m seeing my dress maker Judi on Tuesday who is making a couple of new 1940s dresses for me which I will be wearing out in France for the D-Day commemorations along with my uniforms.

That’s all my news for the moment. Keep Following and Toodle Pip! 😉